Debuting in “Judgment of the Light” (JOTL), “Bujins” got even stronger with “Shadow Specters” (SHSP) and “Legacy of the Valiant”, and now with “Primal Origin”, on sale February 15th, 2014, they’re going to get another major pump! Check the previous JOTL Bujin, SHSP Bujin and LVAL Bujin articles, and make your own “Bujin” Deck! 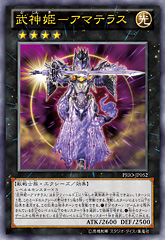 Bujinki Amaterasu
(Beast-Warrior-Type ATK 2600/DEF 2500)
She can be Xyz Summoned using 3 Level 4 monsters! Once per turn, by using an Xyz Material, you can immediately use her effect! If you’re using it during your turn, you can target one of your banished Level 4 or lower monsters and Special Summon it! But if you use it during your opponent’s turn, you can add the targeted banished monster to your hand! Because this effect can be activated at any time, you can use it to Special Summon monsters during the Battle Phase, or you can activate this card’s effect as a Chain in response to an opponent’s effect before that effect resolves!

Introducing the new “Bujin” monster
A New Beast-Warrior-Type “Bujin” Card, the heart of a “Bujin” Deck, has appeared! With her Special Summon effect, building a strong field in a “Bujin” Deck becomes totes easier!

Bujin Hirume
(Beast-Warrior-Type/ATK 2000/DEF 1000)
She can’t be Normal Summoned but you can Special Summon “Bujin Hirume” by banishing any “Bujin” monster, other than “Bujin Hirume”, from your Graveyard! This effect makes her very useful for setting up an Xyz Summon. If Special Summoned this way, when she’s destroyed by your opponent (via battle or effects), and sent to the Graveyard, you can discard 1 card from your hand while your opponent also discards one card, which you can use to help send “Bujingi” to the Graveyard to help set up combos! And with 2000 Attack, she’s quite useful in battle!

New Spell and Trap Cards Appear!
The number of “Bujin” Spells and Traps has also increased, increasing the number of cards that “Bujin Mikazuchi” can add to your hand!

Bujinfinale
(Normal Spell Card)
It’s a card that has a powerful effect that requires you to target a “Bujin” on the field!
During this turn, if the target monster destroys a monster by battle that has ATK equal to or greater than the target’s original attack, that destroyed monster is banished, and all cards with the same name from anywhere in the hand, Main Deck, Extra Deck or Graveyard are banished! By comboing with an effect like “Bujingi Crane” that can increase attack, you can completely banish all of your opponent’s Key Cards!

Bujinvisible
(Normal Trap Card)
Banish one of your “Bujin” Xyz Monsters to activate this card, which’ll allow it to return all monsters on the field to the hand! Also, during your second End Phase after activation, you Special Summon the banished monster, and then attach a “Bujin” monster in your Graveyard to it as an Xyz Material! Between the banishing and the summon, neither player can Summon, and all damage to both players becomes 0, you’ll be able to escape from a pinch, set yourself up for your next move and aim for a huge turnaround!

With all these new “Bujin” cards, it’s even easier to pull off combos that require “Bujins” to work together!

What kind of “Bujin” Deck will you make?