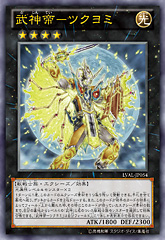 Bujintei Tsukuyomi
(Beast-Warrior-Type ATK 1800/DEF 2300)
Xyz Summon ‘im with 2 Level 4 LIGHT monsters! By using an Xyz Material, you can send your entire hand to the Graveyard, and then draw 2 cards! Beast-Type “Bujin” show off their true worth when they’re sent from the hand to the Graveyard, plus you get to refresh your hand! Also, if this card leaves the field while it has Xyz Material attached, you can use its powerful effect! You can target a number of level 4 Beast-Warrior-Type “Bujin” monsters in your Graveyard, and Special Summon those targets, allowing you to counter your opponent.

Introducing the New “Bujin”
The New Monsters today are all Level 4 LIGHT Monsters! While of course the Deck is centered around the Beast-Warrior-Type “Bujin” monsters, A monster appears that adds “Bujin” monsters from your Deck to your hand. By making it easier for a “Bujin” Deck to deploy a stronger battle formation, the Deck has become even better!

Bujin Arasuda
(Beast-Warrior-Type ATK 1600/DEF 1900)
If a “Bujin” monster is banished from your field or Graveyard, you can Special Summon this card from your hand in face-up Defense Position! That makes an intense combo with the Beast-Type “Bujins” whose effects activate in the Graveyard! Also, this card possesses the ability to let you draw 1 card and then discard 1 card during the End Phase! However, to use this effect, you’ll have had to have added a “Bujin” Card from your Deck to your hand outside of drawing this turn. The combos you can set up with this card using “Bujin Yamato” and “Bujin Mikazuchi” are incredible!

Bujingi Peacock
(Winged Beast-Type ATK 1800/DEF 700)
This card has an effect to add any “Bujin” monster from your Deck to your hand! This’ll let you quickly add the Beast-Warrior-Type “Bujins” your Deck centers around to your hand! However, this card must be sent to the Graveyard, and you can only use this effect during your Main Phase 2. During the turn you activate this effect, you cannot have activated any non “Bujin” Spell/Trap Cards or any non “Bujin” monster effects! With all the new “Bujin” cards to added to the Deck, you should have an easy time using mostly “Bujin” Cards!

Bujingi Hare
(Beast-Type ATK 1700/DEF 500)
This card has a powerful effect that activates by banishing it! When you banish this card to activate its own effect, you can target a “Bujin” Beast-Warrior-Type monster, and that target becomes invincible to battle or effect destruction! Also, you can activate this effect during your opponent’s turn, allowing you to protect your Beast-Warrior “Bujin” while also allowing you to Special Summon “Bujin Arasuda” from your hand! You can take advantage of its ability to combine with “Bujingi Turtle“, which has a similar effect to protect your “Bujin” on the field.

Bujingi Swallow
(Winged Beast-Type ATK 1700/DEF 800)
You can target 1 “Bujin” you control, allowing it to attack twice this turn. But to do so, you have to activate this card during your Main Phase 1, by sending this card from your hand to the Graveyard. During the turn you activate this effect, the target monster is the only only monster that can attack.

New Spells and Traps Also Appear!
The number of “Bujin” Spells and Traps has also increased, increasing the number of cards that “Bujin Mikazuchi” can add to your hand! In addition, this time, there’s a Trap Card that can become an Equip Card that has a once per turn effect. Because it’s a Trap Card, you can’t overlook the fact it can be activated and can use its effect at any time, even during the opponent’s turn.

Bujinsurrection
(Normal Spell Card)
This card has an effect that lets you shuffle all the Beast-Warrior-Type “Bujin” monsters in your Graveyard into your Deck. Then, you send your entire hand to the Graveyard, and finally add up to 3 “Bujin” Beast-Warriors with different names from your Deck to your hand. However, to activate this card, you must not control any other cards. You can add the Bujin Beast-Warriors, “Bujin Yamato“, “Bujin Mikazuchi” and “Bujin Arasuda“, who have come out up until this point, to your hand, and prepare the battlefield as needed!

Bujin Regalia – The Magatama
(Normal Trap Card)
Equip this card to a Rank 4 Xyz Monster, and that Xyz Monster gains 300 Attack for each Xyz Material attached to it! Also, while this card is equipped by this effect, once per turn, you can attach a “Bujin” monster in your hand to the equipped Xyz Monster! If you equip this card to “Bujintei Susanowo“, you can add a “Bujin” from your Deck to your hand, and then equip it to Susanowo as an Xyz Material, you’ll be able to fill up your Graveyard without decreasing your hand size or the number of Xyz Materials attached to Susanowo!

With all these new “Bujin” cards, it’s even easier to pull off combos that require “Bujins” to work together!

What kind of “Bujin” Deck will you make?