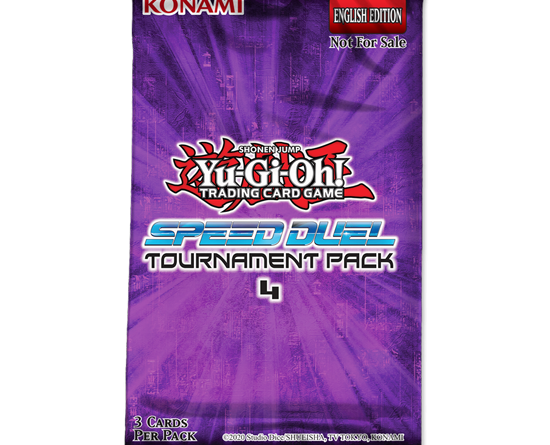 Speed Duel Tournament Packs are not-for-sale items provided EXCLUSIVELY to KONAMI’s Official Tournament Stores, to be used as participation prizing for Duelists entering Speed Duel tournaments.Speed Duel Tournament Pack 4 has new foil Speed Duel-legal cards to upgrade your Deck. Destroy the competition with an Ultra Rare Old Vindictive Magician or call it right and discard your opponent’s best card with Mind Crush as an Ultra Rare! Summon Breaker the Magical Warrior and break your opponent’s Spell and Trap Cards or destroy any monster if Newdoria is destroyed by battle with Super Rare versions of each! You’ll also have a chance to get Common versions of Speed Duel-legal cards you might be missing, such as Nobleman of Crossout, Book of Life, and Champion’s Vigilance.