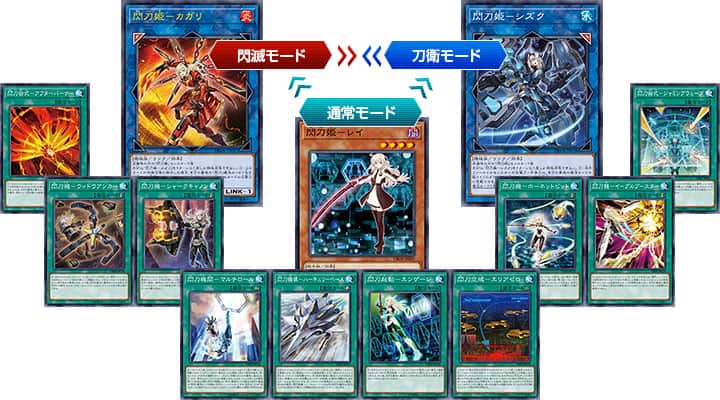 With the effect of “Strikeblade Valkyrie Rei”, she can convert into her battle modes by Tributing herself to call forth “Strikeblade Valkyrie” Link Monsters! Depending on the situation, you can exchange between the Enemy Eradication Mode, “Kagari” and the Location Defense Mode, “Shizuku”, while you fight using the various weapons in her arsenal that take the form of “Strikeblade” Spell Cards!

Her ability to make plays that let her run on straight through the enemy line is incredible, and even if “Kagari” and “Shizuku” get captured by the enemy, “Rei” can appear to Counterattack… …

She Strengthens Herself With Eradication Mode!! Let’s Wipe Out The Enemy Forces By Adding “Strikeblade” Spell Cards From The GY When She Appears!!

She Weakens Enemies With Swordwall Mode!! Let’s Add A “Strikeblade” Spell Card From The Deck To Your Hand With Her Powerful Effect For The Next Big Move!

Also Keep In Mind The Spell/Trap Cards That Strongly Support This Series!!

To strongly support the “Strikeblade Valkyrie” monsters that run roughshod through the enemy lines, there’s 10 different Spell Cards to Check Out! If your GY has 3 or more Spell Cards, many of these cards allow you to use a second effect as well, which makes them extremely powerful!!

Add “Strikeblade” Cards From The Deck To The Hand!! By Preparing The GY, You Can Also Aim For Its Draw Effect!

Destroy A Face-up Monster!! And It Also Has An Intense Effect To Additionally Destroy A Spell/Trap Card!

Strikeblade Maneuver Afterburner
[Normal Spell]
If you control no monsters in your Main Monster Zones: Target 1 face-up monster on the field; destroy it, then if you have 3 or more Spells in your GY, you can destroy 1 Spell/Trap on the field.

Destroy A Set Spell/Trap Card!! By Preparing The GY, You Can Also Destroy A Monster!

Strikeblade Maneuver Jamming Wave
[Normal Spell]
If you control no monsters in your Main Monster Zones: Target 1 Set Spell/Trap on the field; destroy it, then if you have 3 or more Spells in your GY, you can destroy 1 monster on the field.

Strikeblade Battlegear Hornet Bit
[Quick-Play Spell]
If you control no monsters in your Main Monster Zones: Special Summon 1 “Strikeblade Valkyrie Token” (Warrior/DARK/Level 1/ATK 0/DEF 0) in Defense Position, but it cannot be Tributed. If you have 3 or more Spells in your GY, its ATK/DEF become 1500.

A Quick-Play Spell That Negates Effect Monster Effects! Its Additional Effect Also Lets You Take Control Of That Monster!

Strikeblade Valkyrie Widow Anchor
[Quick-Play Spell]
If you control no monsters in your Main Monster Zones: Target 1 Effect Monster on the field; it has its effects negated (until the end of this turn), then if you have 3 or more Spells in your GY, you can take control of that monster until the End Phase.

A Powerful Quick-Play Spell That Protects “Strikeblade Valkyrie”s From Effect And Battle!! It Can Also Be Used On Your Opponent’s Monsters Depending On The Circumstances!

Strikeblade Battlegear Eagle Booster
[Quick-Play Spell]
If you control no monsters in your Main Monster Zones: Target 1 face-up monster on the field; this turn, that target is unaffected by card effects, except for its own effects, also if you have 3 or more Spells in your GY, it cannot be destroyed by battle this turn.

Banish Monsters From Your Opponent’s GY!! By Preparing The GY, It Won’t Be Banished But Special Summoned To Your Field Instead!

Strikeblade Battlegear Shark Cannon
[Quick-Play Spell]
If you control no monsters in your Main Monster Zones: Target 1 monster in your opponent’s GY; banish it, but if you have 3 or more Spells in your GY, you can Special Summon that monster to your field instead, but it cannot attack.

An Equip Spell That Lets You Attack And Draw Twice! It Also has An Effect To Shuffle “Strikeblade” Cards In The GY Back To The Deck!

Strikeblade Battleship Hercules Base
[Equip Spell]
Activate only if you control no monsters in your Main Monster Zones. The equipped monster can make up to 2 attacks on monsters during each Battle Phase, but it cannot attack directly. If the equipped monster destroys a monster by its attack while you have 3 or more Spells in your GY: Draw 1 card. If this card is sent from the field to the GY by a card effect: You can target up to 3 “Strikeblade” cards in your GY, except “Strikeblade Battleship Hercules Base”; shuffle them into the Deck.

A Continuous Spell That Prevents Your Opponent From Disrupting The Activation Of Spell Cards!! It Also Has An Intense Effect To Let You Reuse The “Strikeblade” Spell Cards You’ve Used!!

Strikeblade Battle System Multirole
[Continuous Spell]
Once per turn: You can target 1 other card you control; send it to the GY, also your opponent cannot activate cards or effects in response to your Spell Card activations this turn. Once per turn, during the End Phase: You can Set “Strikeblade” Spells with different names from your GY to your field, up to the number of “Strikeblade” Spell Cards you activated this turn while this card was face-up on the field, but banish them when they leave the field.

You can choose to experience either a “Skyfang Brigade” or “Strikeblade Valkyrie”!
You can join for free, and before you Duel, staff members will lecture on how to use the Deck!

▼ Go to the Deck Experience Event where you can Duel with Decks containing new cards before they’re released! 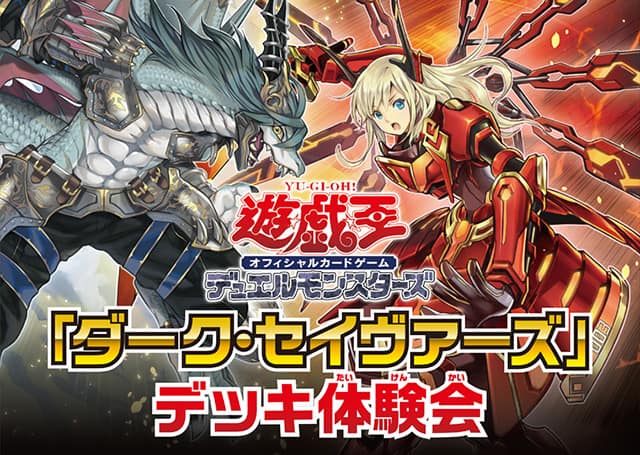 What kind of cards will you combine to make your Deck?
Let’s think of some good cards!
─── By applying conditions and searching the Card Database, you’ll discover new possibilities!!

Deck Build Pack Dark Savers
[February 24th, 2018]
The second Deck Build Pack appears which you can use to enjoy building your Deck with cards included that belong to the same series! This time around there’s three series of cards of different types included, and there’s very highly versatile cards included that can be used in all sorts of Decks! There’s the “Skyfang Brigade” who bring out their comrades from the hand one after another, leading to intense combos, while there’s also “Strikeblade Valkyries” who fight with various weapons (i.e. Spells) and transforming into decisive battle modes via Link Summoning based on the game situation, both appear as new series!
[To The Product Page]