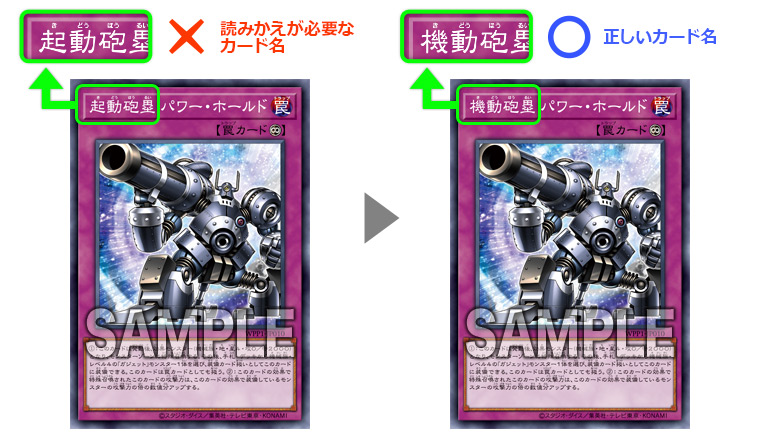 Or yet another example on how there’s too many Kanji that are read “ki”.

An error has been detected in the name “Powerhold the Moving Battery” that is going to be included in the World Premiere Pack to be released in October 3rd 2020. Players are encouraged to use the correct card name from the release date. 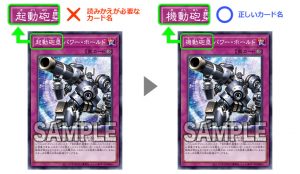 The Japanese name of the card originally was revealed as “起動砲塁 パワー・ホールド”. It should have been “機動砲塁 パワー・ホールド”. The difference lies in the first Kanji, connecting to the second one. “起動” means “to launch/activate”. “機動” means mobile as an adjective. Both of these words are read as “kidou”. The first word is very common and since we are talking about a machine, the context isn’t exactly incorrect. However the second word is the correct one mainly because it makes this card name coherent with Stronghold the Moving Fortress (機動砦 ストロング・ホールド) and Metalhold the Moving Blockade (機動要塞 メタル・ホールド). In these cards, “mobile” reflects that these usually static barricades have been designed to be able to move around as well, making them even more troublesome.
More importantly, “起動” (the incorrect one) is used for the various “Boot-Up” cards included in the same product, which may cause some confusion.

The article doesn’t seem to explicitly mention whether the physical cards will have this problem or not. And of course, the article offers an extensive and polite apology for any problems caused by this error.