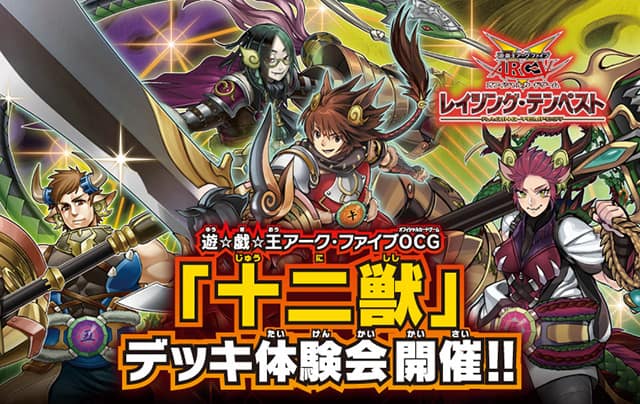 Editor’s Note: For the moment, this article will be referring to the theme we’ve literally transcribed as “Jyuunishishi” with the most literal name choice at the moment for lack of better options at the moment. It is of course subject to change whether by group decision or by Konami revealing their group name, whichever comes first.

So let’s check out the characteristics of the “Twelve Beast” included in “Raging Tempest” (on sale October 8th, 2016)! 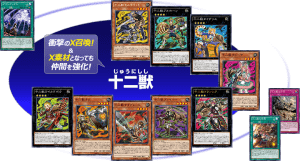 You can Xyz Summon on top of “Twelve Beast” monsters that aren’t Xyz Monsters!

Xyz Summon by placing them on top of “Twelve Beast”!!

Non-Xyz Monster “Twelve Beast” are okay too! Place them on top to Xyz Summon!!

Xyz Material’d “Twelve Beasts” Have An Important Role Of Providing Monster Effects Along With ATK & DEF!

With multiple Xyz Materials attached, not only does that Xyz Monster get multiple new effects, but it gains ATK and DEF equal to the respective values of the materials of each Monster attached!

Let’s check out the effects of each of the different “Twelve Beast” Xyz Monsters!

The Effects Each “Twelve Beast” Xyz Monster Has!

Each possess two Monster Effects, and one of them is an effect that applies when it’s an Xyz Material. If this card is attached as an Xyz Material, that Beast-Warrior-Type Xyz Monster can gain a new Effect!

Introducing Spell & Trap Cards that have effects that support and bring out “Twelve Beast” monsters! Since 2 of them have “Twelve Beast” in their name, they can be used for various combos!

Check out the explanatory video! Go the your local event after memorizing the Key Word mentioned in the Video!

Check the animation and then participate at the Deck Experience Event!

You get a gift when you give the answer mentioned in the video at the “Keyword Quiz” being held by staff at the experience event!

▼ The Deck Experience Event Where You Can Duel Decks Based On The New Cards!

“Twelve Beast” Deck Experience Event is Being Held [Untl October 7th, 2016]
What kind of cards will you mix together when you make your Deck?

Consider as many cards as possible which work well with them! Appoint conditions when searching the card database to discover new possibilities!!

Raging Tempest [On Sale October 8th, 2016]
Not only does this set have a new Ace Monster that appears in the animated series “Yu-Gi-Oh! ARC-V”, but it includes many new cards used by Yuya! Also, also new cards from Kaito appear, along with his new trump card with a terrifying effect! And also, Rin’s cards make their debut in the Official Card Game along with new cards from Yugo, and overall there’s plenty of cards from various rivals! And the new themes “Twelve Beast” and “Esprit Bird” appear, with plenty of powerful new cards!
[ To The Product Page ]