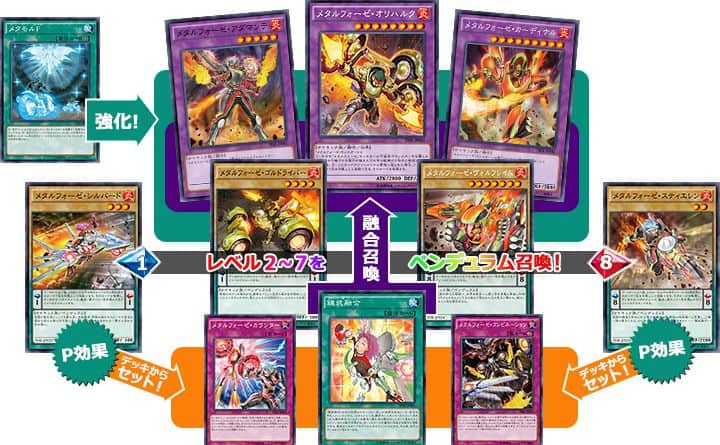 The new Series “Metalphosis” ride through the field with their FIRE Psychic-Type Pendulum Monsters, and follow it up with the trump card Fusion Monsters! This is a Series that Pendulum Summon to deploy the Fusion Materials to the field, and keep Fusion Summoning again and again!

Let’s check out this Special Feature on the “Metalphosis”, which are included in “The Dark Illusion” (on sale April 9th, 2016)! 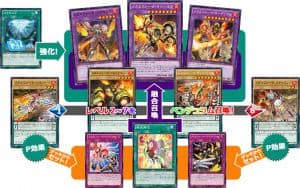 The “Metalphosis” Fusion Monsters of course have powerful monster effects, but they can also Fusion Summon using monsters with wide-range specifications such as “Monsters with 2500 or less ATK” as their materials!

A Fusion Monster With 2 Powerful Effects!

Metalphosis Orihalc
[ATK 2800/DEF 2200]
Materials: 2 “Metalphosis” monsters
If a “Metalphosis” monster you control attacks a Defense Position monster, inflict doubled piercing battle damage to your opponent. If this card is sent from the field to the Graveyard: You can target 1 card on the field; destroy it.
[⇒ Its first effect means if its attacks a Defense Position monster with 0 DEF, your opponent takes 5600 Damage! And, its allies in the Monster Zone also gain this ability! Also its second effect, which activates in the Graveyard, is incredibly powerful, you can destroy your own cards to launch various combos!]

Fusion Monsters That Can Be Called Forth Using A Wide Variety Of Monsters!

Metalphosis Adamante
[ATK 2500/DEF 2500]
Materials: 1 “Metalphosis” + 1 or more monsters with 2500 or less ATK
[⇒ Since you can use any Monster with 2500 or less ATK as a Fusion Material for this card, there’s a wide variety of options to choose from! This means you can use monsters that can be used in many decks such as “Ghost Ogre & Snow Rabbit”, “Effect Veiler” or “Maxx “C”” as the Fusion Materials! Also, by making use of the effects of “Mind Control” and “Super Polymerization”, you can even use your opponent’s monsters as Fusion Material! And, since this card can be called with “Instant Fusion” since it’s a Level 5 Monsters, you can even use it for “Metalphosis” combos or to Fusion Summon “Metalphosis Orihalc”!]

Metalphosis Cardinal
[ATK 3000/DEF 3000]
Materials: 1 “Metalphosis” monster + 2 or more monsters with 3000 or less ATK
[⇒ Since you can use any Monster with 3000 or less ATK as a Fusion Material for this card, you can Fusion Summon it using an even wider variety of cards than “Metalphosis Admante”! However, you’ll need to use 3 Fusion Materials to make it, so you’ll need to plan ahead! It works really well with the Continuous Trap Card “Metalphosis Combination” (mentioned below), which you can activate when you Fusion Summon this card and Special Summon “Metalphosis Orihalc” from the Graveyard for an immense combo! Also, since you can destroy 1 card on the field when “Metalphosis Orihalc” is sent to the Graveyard, you can make inroads instantly using these two card!]

“Metalphosis” Pendulum Monsters are Normal Monsters that don’t have Monster Effects. And, each Pendulum Monster, shares the same Pendulum Effect, allowing you to unleash your next combo! And, their Pendulum Scales are 1 and 8. This means you can Pendulum Summon Monsters between Levels 2 and 7 at the same time without any special conditions!

We’re introducing the 4 powerful Support Cards which support “Metalphosis” Decks! They’re cards you can all set from your Deck to your field using the Pendulum Effect of “Metalphosis” Pendulum Monsters, except “Metamor Formation”!!!

Metalphosis Fusion
[Normal Spell Card]
Fusion Summon 1 “Metalphosis” Fusion Monster from your Extra Deck, using monsters from your hand or field as Fusion Materials. If this card is in your Graveyard: You can shuffle this card into your Deck, then draw 1 card. You can only use this effect of “Metalphosis Fusion” once per turn.
[⇒ This Deck’s most essential card! Fusion Summon with its first effect, and use its second effect to refresh your hand while recycling this card! Its second effect can be used multiple times per turn, meaning you can keep Fusion Summoning 1 card after another!]

Metalphosis Counter
[Normal Trap Card]
If a card(s) you control is destroyed by battle or card effect: Special Summon 1 “Metalphosis” monster from your Deck. During either player’s turn, except the turn this card was sent to the Graveyard: You can banish this card from your Graveyard; add 1 face-up “Metalphosis” Pendulum Monster from your Extra Deck to your hand.
[⇒ Its first effect is strong! It doesn’t matter what kind of card it is nor what position it is, as long as a card you control is destroyed by battle or effects, you can activate this card! Also, its second effect is also strong, as it supports further moves of “Metalphosis” Decks!]

Cards With Great Chemistry With “Metalphosis” Decks!
Let’s pick up various good cards based how they can work in tandem with your Deck! There are plenty of great cards that work with them, so look for them as well!

Strengthen Them With Effects That Support Normal Monsters!

“Rescue Rabbit”
⇒ You can Special Summon 2 “Metalphosis” Pendulum Monsters from the Deck at the same time!!

“Painful Decision”
⇒ Add a “Metalphosis” Pendulum Monster from your Deck to your hand!
At the same time, send a monster with the same name to the Graveyard, allowing for you to prepare for a combo with “Metalphosis Combination”!

“Summoner’s Art”
⇒ You can add “Metalphosis Wolflame” from your Deck to your hand!

Intensify Your Combos With Cards That Work With Their Pendulum Effect (Which Destroys Face-Up Cards)!

“Guiding Ariadne”
⇒ If you play it in either a Pendulum Zone or Monster Zone, if you destroy it with the Pendulum Effect of “Metalphosis”, you’ll be able to add a Counter Trap Card from your Deck! And since this card is added to the Extra Deck afterwards, you can aim at combos by repeatedly Pendulum Summoning it!

“Graydle Alligator”
⇒ When this card is destroyed by a card’s Pendulum Effect (say a “Metalphosis”), it’s treated as being destroyed by a Spell Card, meaning you can tie into its effect to take control of an opponent’s monster!

And, since this card is treated as an Equip Card while it’s controlling an opponent’s monster, the fact you can target it as a card to destroy with the Pendulum Effect is also intense!

It’s Possible To Intensify And Expand The Possibilities Of Your Fusion Summons!

“Instant Fusion”
⇒ Of course you can Fusion Summon “Metalphosis”, but you can also call forth “Panzer Dragon” and “Thousand-Eyes Restrict” which have effects that seize control of the opponent’s field! Before the monster called by this effect is destroyed during the End Phase, try and use it as a target for the Pendulum Effect of a “Metalphosis” card! Also, the opponent’s monster you equip with the effect of “Thosuand-Eyes Restrict”!

Pay Attention To These Cards That Bolster The Psychic-Type!

“Mind Over Matter”
⇒ This card has a strong effect that can negate the activation of a Spell or Trap Card OR the Normal / Special Summon of a monster, and destroy it! Use your “Metalphosis” monsters as the Psychic-Type monster to Tribute to activate it!

What cards will you mix together for your Deck?
Think about cards that work well together.
… …. Consider conditions and search the Database to discover new possibilities!!

The Dark Illusion [On Sale April 9th, 2016]
Many new powerful cards from the animated series “ARC-V” appear, starting with the battle between Yuya and Jack! Also, many new cards related to “Dark Magician” are included! You’ll be able to pull off various splendid and phantasmagoric combos with both Spells and Traps! Also, keep your eyes on the new “Metalphosis” Series! They Pendulum Summon their Fusion Materials to the field, then aim to Fusion Summon again and again, making them quite the incredibly strong series!
[ To The Product Page ]