We’re doing a second round of introductions to the new “Entermage” theme included in “Clash of Rebellions” (which comes out April 25th, 2015)!!
[Previous Article] New Card News (Included in CORE)! It includes the “Entermages” that appear in the animated series!

A monster with a powerful effect that Special Summons “Entermages” from the Graveyard when it’s sent to the Graveyard!

“Entermage Trick Clown” with its powerful effect, allows for incredibly strong combos and moves with “Entermages”! Let’s check out its effect and noteworthy points below! 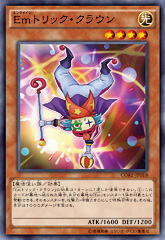 Noteworthy Points:
• Its effect can be activated even when it’s sent to the Graveyard
⇒ Of course it’s fine if it’s sent from the hand, field or even Deck, but it also works if it’s sent to the Graveyard as an Xyz Material!
• Its effect lets you target it to Special Summon itself.
• Its effect even lets you target the Xyz Monster “Entermage Trapeze Magician”, letting you combine it for a combo involving “Entermages” and taking damage.
A Small Introduction To Other Cards From The Theme!

Entermage Flame Eater
[Spellcaster-Type ATK 1200/DEF 1600]
Its effect can be activated when you would take damage due to a card effect, allowing you to Special Summon it from the hand, and then make the damage you take zero! It’s perfect for setting up an Xyz Summon of “Entermage Trapeze Magician”!

(Basically if you do that, you won’t be affected by “This turn, you cannot Special Summon monsters except “Entermage” monsters” and “If this card is Special Summoned by this effect, banish this card when it leaves the field.”)

“Enetermages” come out one after another with strong combos!
If you chain the “Enetermage Flame Eater” in your hand to the effect of “Entermage Trick Clown”, you can pull off a powerful combo that allows you avoid damage while gathering two Level 4 monsters on the field! Then you can Xyz SSummon “Entermage Trapeze Magician”! In addition, it’s not just the “Entermage” we showed this time. There’s also other powerful “Entermage” Combos you can pull off!

Clash of Rebellions [On Sale April 25th, 2015]
“Odd-Eyes Rebellion Dragon”, called forth by Yuya after he was twisted by his rage, appears! Of course includes cards to power up existing Themes, such as cards from his rivals such as “D/D”, “Raidraptors” and “Entermages”! What the, even “Red-Eyes” gets stronger! And, of course, we should note new Themes! There’s the “Igknights” who fight using Pendulum Summons, along with the “Aromages” who have various Life Point recovering combos, meaning there’ll be even more exciting Duels in the future!
[ To the Product Page ]