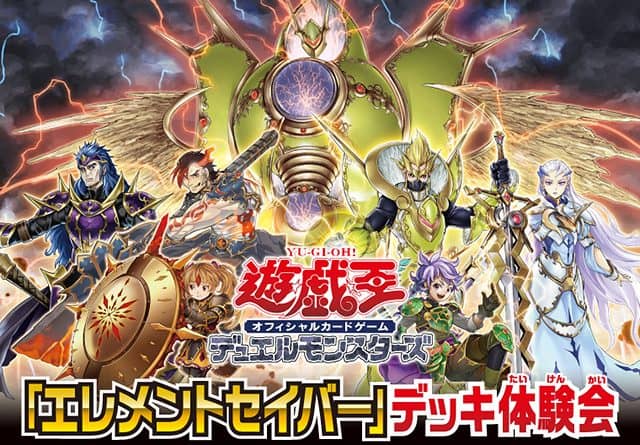 “Element Saber” Special Feature: They Can Call Forth The “Elemental Lord” By Changing Their Attributes In The GY!!

“FLAMES OF DESTRUCTION” (on sale January 13th, 2017) contains the new series “Element Saber” who fight by calling for the “Elemental Lords” who possess super powerful effects! Most of the “Element Saber”s have the effect during either turn to change their Attribute in the GY, allowing you to set up the conditions to call “Elemental Lords”! And, each of their effects help their allies while there’s also powerful Spell/Trap Cards that support the series, whose effects all you to send monsters to the GY to allow for further moves! 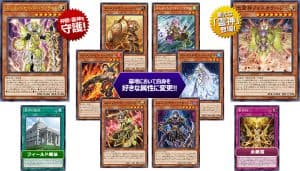 Once there’s 5 LIGHT monsters gathered in your GY, you ca Special Summon a LIGHT “Elemental Lord” from your GY!

When it’s Special Summoned, its intense effect destroys all monsters your opponent controls!

Phosorage the Elemental Lord
[LIGHT/ATK 2800/DEF 2200]
Cannot be Normal Summoned/Set. Must be Special Summoned (from your hand) by having exactly 5 LIGHT monsters in your GY.
(1) When this card is Special Summoned: You can destroy all monsters your opponent controls. You can only use this effect of “Phosorage the Elemental Lord” once per turn.
(2) If this face-up card leaves the field, skip the Battle Phase of your next turn.

The Level or lower “Element Saber” monsters have an effect to change their Attributes in the GY to support Special Summoning “Elemental Lord” monsters!

Let’s introduce the common effect of the “Element Saber”s

Once per turn, if this card is in your GY: You can declare 1 Attribute; this card in the GY becomes that Attribute until the end of this turn.

Each of them have another powerful effect, let’s check it out!

Their Individual Effects Are Also Strong!

It Can Special Summon Itself from the Hand, And Has Powerful Effects That Protect “Element Saber”s And “Elemental Lord”!

Element Saber Willard
[LIGHT/ATK 2400/DEF 2100]
(1) You can send 2 other monsters from your hand to the GY; Special Summon this card from your hand. You can only use this effect of “Element Saber Willard” once per turn.
(2) Apply the appropriate effects to “Element Saber” and “Elemental Lord” monsters you control, depending on the original Attributes of the “Element Saber” monsters sent to the GY to activate this card’s effect.
● EARTH or WIND: They cannot be destroyed by battle.
● WATER or FIRE: They cannot be destroyed by card effects.
● LIGHT or DARK: Your opponent cannot target them with card effects.

These two support cards that make their debut are strong! Check them out!

Send “Element Saber” From The Deck To The Hand Or GY! Besides Supporting Deploymant, It Has An Intense Effect That Bolsters Monsters!

Element Training
[Continuous Trap]
(1) Your opponent cannot target “Temple of the Elemental Lords” you control with card effects, also it cannot be destroyed by card effects.
(2) Once per turn: You can Tribute 1 monster; Special Summon 1 “Elementsaber” monster from your Deck with a different original Attribute from that monster’s.
(3) You can send this face-up card to the GY; discard your entire hand, then add “Elemental Lord” monsters from your GY to your hand, equal to the number of cards you discarded.

Check out this Video! You’ll get something good if you give an answer to to the Key Word Quiz at the Experience Event provided in this videos!

▼ Go to the Deck Experience Event where you can Duel this Deck made of new cards before they go on sale! 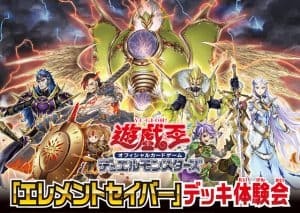 The “Element Saber” Deck Experience Event Is Being Held [Until January 12th, 2018]

What kind of Deck will you make combining various cards?
Let’s consider compatiable cards that have already been released!
— By searching the Card Database and specifying conditions, you’ll be able to discover new possibilities!!

FLAMES OF DESTRUCTION
[On Sale January 13th, 2018]
Of course it includes cards from the animated series “Yu-Gi-Oh! VRAINS”, but this core pack (the 4th of the 2017 Fiscal Year) contains cards vital for all Duelists! Also powerful cards for the “Trickstars” used by Blue Angel and the “Gouki” used by Go Onizuka! Also, there’s plenty of cards used by the Protaganist and his rivals! And there’s many other cards worth paying attention to, between themes making their debut and cards that strengthen existing Decks!
[ To The Product Page ]