Beginning with an intense Level 10 Synchro Monster, there’s many powerful new cards that support the series! A Synchro/Tuner also appears, allowing for new variations in moves!!

A powerful ace monster appears with enormous ATK, that has an effect to disrupt the opponent’s field, and another that calls forth an ally of this destroyed ace! 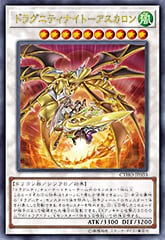 Dragunity Knight – Ascalon
[Dragon ATK 3300/DEF 3200]
1 “Dragunity” Tuner + 1+ non-Tuner monsters
You can banish 1 “Dragunity” monster from your GY, then target 1 monster your opponent controls; banish it. If this Synchro Summoned card in its owner’s control is destroyed by an opponent’s card (by battle or card effect): You can Special Summon 1 “Dragunity” Synchro Monster with 3000 or less ATK from your Extra Deck. (This is treated as a Synchro Summon.) You can only use this effect of “Dragunity Knight – Ascalon” once per turn.

New possibilities open with the appearance of a Synchro Tuner! The combos it can pull off with a new Continuous Trap are also powerful! You can also call it forth with the effect of “Crystron Glassfiber”, allowing all sorts of developments depending on the situation! Its effect also buffs the equipped monster!

A Level 6 Synchro Tuner! Equip Your Allies In The GY, And Support The Tactics Of Your Allies By Equipping Itself To Them!

Its Effect That Equips “Dragunity” Tuners From The Deck Is Strong, Heavily Supporting Early Game Plays!

It Can Special Summon Itself If Treated As An Equip Card! It Further Supports Plays By Treating Itself As Level 4 For Synchro Summons!

A powerful Continuous Trap appears that lets you choose 1 of 2 effects to activate! And it can be activated during either player’s turn! It’s easy to pull off Synchro Summon in all sorts of ways with this card to bring out Synchro Monsters in all sorts of ways!

A Continious Trap Card That Makes Allies In The GY Into Equip Cards Or Special Summon Allies That Are Equip Cards!

Choose either the “Cyber Dragon” or “Dragunity” Deck, and experience it! Join, and enjoy the lecture on how to use the deck from the staff before the match!

▼ Go To The Deck Experience Where You Can Duel With Decks Containing The New Cards Before They’re Released! 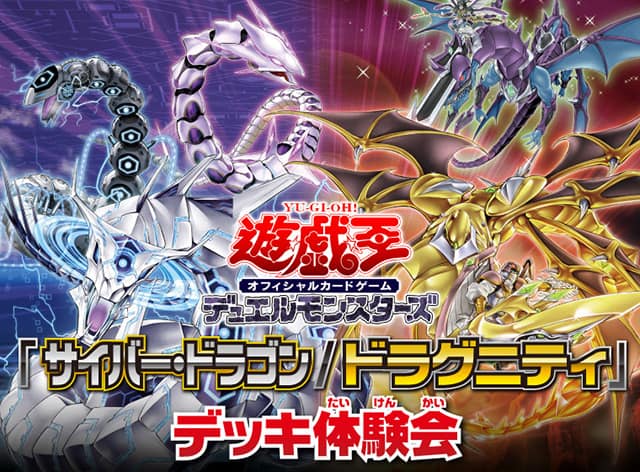 What cards will you combine to make your Deck?
Let’s give you just a couple good cards to start!
─── If you specify conditions and search the Card Database to discover new possibilities!!

Cybernetic Horizon
[On Sale April 14th, 2018]
Besides including cards from the “Yu-Gi-Oh! VRAINS” animated series, this fundamental pack (the first one of the 2018 Financial Year) includes cards all Duelists will need! New Ritual Monsters, including ones of the Cyberse-Type used by Playmaker, are included as well! And at the same time, there’s also cards that support Ritual Summons! And besides new Series, there are also new cardss to support existing series, all of which you’ll be sure to enjoy!!
[ To the Product Page ]