“Dragoknight Luster Pendulum” is a Pendulum Monster and also a Tuner!

Clash of Rebellions (CORE) which comes out April 25th, 2015, includes a Pendulum Monster Card that’s also a Tuner! A new light shines from the fact you can use Pendulum Summons to Synchro Summon! 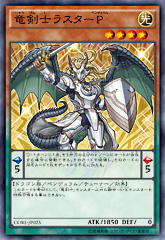 Dragoknight Luster Pendulum
[Dragon-Type ATK 1850/DEF 0]
Monster Effect:
This card cannot be used as a Fusion, Synchro or Xyz Material, except for a “Dragoknight” monster.
Pendulum Effect:
(1) Once per turn, if you control a card in your other Pendulum Zone: You can destroy that other card, and if you do, add 1 card with the same name from your Deck to your hand.

Noteworthy Points:
• It’s a Tuner that’s also a Pendulum Monster (Pendulum Scale 5)
• It’s a Level 4 monster with 1850 ATK!
• Its Pendulum Effect is strong! It’s an effect that lets you prepare for a huge number of Pendulum Summons from the Extra Deck!

You can Synchro Summon this monster using “Draoknight Luster Pendulum” as a material! It has two incredibly powerful effects that can help with a ton of situations, and with 2850 Attack, it can play an active role in battle! And on top of it, this card is also in “Clash of Rebellions”! 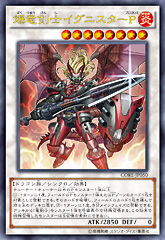 Explosive Dragoknight Ignister Prominence
[Dragon-Type ATK 2850/DEF 0]
1 Tuner + 1 or more non-Tuner Pendulum monsters
(1) Once per turn: You can target 1 face-up Pendulum Monster or 1 card in a Pendulum Zones; destroy it, and if you do, shuffle 1 card on the field into the owner’s Deck.
(2) Once per turn: You can Special Summon a “Dragoknight” monster from your Deck in face-up Defense Position, but it cannot be used as a Synchro Material.

By the way, the first effect of “Explosive Dragoknight Ignister Prominence”, you can target either a card on your field or your opponent’s field! This means you can destroy your opponent’s card AND bounce one of their cards!

(Note: The original text said return to the opponent’s hand, this is assumed to be a typo.)

With these two “Draoknights”, you’ll be able strongly support a Deck based around Pendulum Summons!
What kind of cards will you combine it with? Give a try thinking about it!

Clash of Rebellions [On Sale April 25th, 2015]
“Odd-Eyes Rebellion Dragon”, called forth by Yuya after he was twisted by his rage, appears! Of course includes cards to power up existing Themes, such as cards from his rivals such as “D/D”, “Raidraptors” and “Entermages”! What the, even “Red-Eyes” gets stronger! And, of course, we should note new Themes! There’s the “Igknights” who fight using Pendulum Summons, along with the “Aromages” who have various Life Point recovering combos, meaning there’ll be even more exciting Duels in the future!
[ To the Product Page ]