We’re introducing the “Dinomist” series that has first appeared in “Breakers of Shadow” which is currently on sale (and was first released on October 17th, 2015)! A series that centers around Level 4 and 5 WATER Machine-Type Pendulum monsters, they have plenty effects that take advantage of bringing themselves out via Pendulum or Special Summons, but they can also gain advantage through battle, activating their effects via battle to unleash powerful combos!

Let’s check out their quirks and features here! 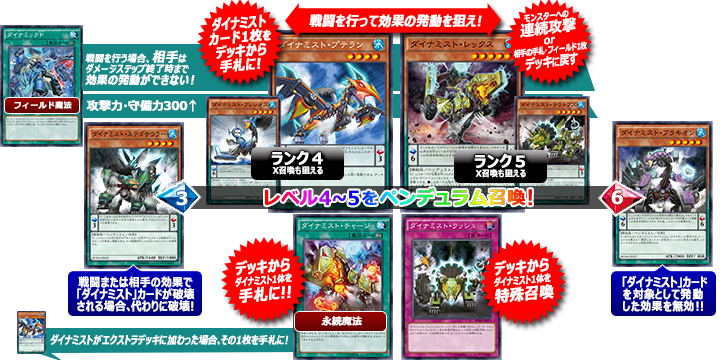 Currently all the “Dinomist” monsters released are Pendulum Monsters. You can divide them into two groups based on their PendulumScale and Pendulum Effect!

The Pendulum Effects of the “Dinomist” Pendulum Monsters

Pendulum Scale 3
①： If another “Dinomist” card(s) you control would be destroyed by battle or an opponent’s card effect, you can destroy this card instead
[⇒ If “Torrential Tribute” would destroy 2 or more of your cards, you can protect ALL of those cards!]

Pendulum Scale 6
①： Before resolving a card effect that targets another “Dinomist” card(s) you control, you can negate the effect, then destroy this card. This effect can only be used once while this card is in the Pendulum Zone.

By using Pendulum Scales of 3 and 6, you can Pendulum Summon any Level 4 or 5 monsters! Not only that but you can fight using your Pendulum Effects to protect your Dinomist Cards!

The Monster Effects of the “Dinomist” Pendulum Monsters

The Monster Effects of the “Dinomist” are centered around either Special Summoning OR are related to battle. If you bring them out with their effects and Pendulum Summons, you can aim to follow up with an Xyz Summon!

Dinomist Stegosaurer
[Machine-Type ATK 1600/DEF 1800]
①： When another Pendulum Monster you control battles an opponent’s monster, after damage calculation: You can destroy both monsters.
[⇒ This monster has an effect that you can make use of by bringing out multiple “Dinomist” monsters at once! Bring them out via Pendulum Summon, then if your opponent has monsters with high ATK, use this effect to destroy them! ]

Dinomist Plesios
[Machine-Type ATK 1700/DEF 1400]
①： Monsters your opponent controls lose 100 ATK and DEF for each “Dinomist” card you control.
[⇒ It has an effect that lowers the ATK and DEF of opponent monsters, but not that of “Dinomist” monsters, and it also counts cards like the Continuous Spell “Dinomist” Charge or your “Dinomist” cards in the Pendulum Zone! ]

Dinomist Pteran
[Machine-Type ATK 1800/DEF 1200]
①： When this card destroys an opponent’s monster by battle: You can add 1 “Dinomist” card from your Deck to your hand.
[⇒ The cards it can add from the Deck to the hand aren’t just “Dinomist” monsters, but you can also grab “Dinomist” Spells or Traps! Since it’s quite useful at massively expanding your options with “Dinomist”, you can aim to activate the effect of this card while winning in battle using the effects of “Dinomist Plesios” and “Dynamic Powerload”! ]

Dinomist Brachion
[Machine-Type ATK 2000/DEF 800]
①： If you do not control a “Dinomist Brachion” in your Monster Zone and your opponent controls the monster on the field that has the highest ATK, you can Special Summon this card (from your hand).
[⇒ You can utilize its Special Summon effect to set up for a Rank 5 Xyz Summon! Using 2 Level 5 WATER monsters, you can bring out “Number 94: Crystalzero”, then Xyz Summon “Full Armored Crystalzero Lancer” on top of it, and overwhelm all monsters your opponent controls! ]

Dinomist Ceratops
[Machine-Type ATK 2100/DEF 400]
①： If all monsters you control are “Dinomist” monsters other than “Dinomist Ceratops” (min. 1), you can Special Summon this card (from your hand).
[⇒ You can utilize its Special Summon effect to set up for a Rank 5 Xyz Summon! By brining it together with “Dinomist Brachion”, you can use 2 Level 5 Machine-Type monsters for “Cyber Dragon Nova”, and the bring out “Cyber Dragon Infinity” which is pretty strong! ]

Dinomist Rex
[Machine-Type ATK 2400/DEF 2200]
①： At the end of the Damage Step, if this card attacked: You can Tribute 1 other “Dinomist” monster, then activate 1 of these effects;
• This card can attack an opponent’s monster again in a row, and if that monster is in Defense Position, inflict piercing battle damage to your opponent.
• Shuffle 1 card from your opponent’s hand (at random) or field into the Deck, then this card gains 100 ATK.
[⇒ You can choose which powerful effect you want to activate! Take advantage of your Pendulum Summons and Special Summons to use this card’s effect to its fullest! ]

Spell and Trap Cards That Support The “Dinomist” Series!

They have powerful effects that support bringing out “Dinomist” and using them to battle!!

Dynamic Powerload
[Field Spell Card]
①：All “Dinomist” monsters on the field gain 300 ATK and DEF. ②：When a “Dinomist” monster you control attacks or is attacked, your opponent cannot activate cards or effects until the end of the Damage Step.
[⇒ Its ① effect is suppost for activating the effects of cards like “Dinomist Pteran” that activate via battle! Also, its ② effect is also really strong, as it prevents your opponent from activating cards like “Mirror Force” when you declare an attack or activating any cards during the Damage Step! Your opponent can’t even activate the effects of cards that activate when sent to the Graveyard, so you can destroy them in battle without having worrying! ]

Dinomist Charge
[Continuous Spell Card]
You can only activate 1 “Dinomist Charge” per turn. ①： When this card is activated: Add 1 “Dinomist” monster from your Deck to your hand. ②： Once per turn, if a “Dinomist” card(s) is added from the field to your Extra Deck face-up: Add 1 of those cards to your hand.
[⇒ It has an effect that heavily supports using “Dinomist”! Also, if your Pendulum Zone card is destroyed (even due to your Pendulum Effect), you can make sure you can set your Pendulum Zones up against with this card’s ② effect, which’ll allow you to Pendulum Summon once more! ]

Dinomist Rush
[Normal Trap Card]
You can only activate 1 “Dinomist Rush” per turn. ①： Special Summon 1 “Dinomist” monster from your Deck, and if you do, it is unaffected by other card effects, but it is destroyed during the End Phase.
[⇒ By Special Summon a “Dinomist” monster from the Deck, you can set up for Combos or Xyz Summoning! The effect that prevents it from being affected by other cards is also incredibly strong, meaning it won’t be destroyed even if your opponent activates “Torrential Tribute”! By the way, while that card is unaffected by other cards’ effects, keep in mind it can be used as a Tribute (i.e. Cost) for the effects of cards like “Dinomist Rex”! ]

Use “Dinomist” how you feel they’re best to use!

Breakers of Shadow
[Goes On Sale October 17th, 2015]
Of course there are new “Performapal” and “Magician” cards, but it also includes Yuya’s first Synchro Monster! Also, a new “Odd-Eyes” Ritual Monster appears! It also includes many of the cards used by the Lancers, and Tsukikage’s new “Ninja” monsters have become Official Card Game Cards! And, also of note is the new series “Shiranui”! Attack with Synchro Monsters by banishing Zombie-Type monsters from your Graveyard! And “Buster Blader” monsters gain new life with the “Destruction Sword” series!
[ To the Product Page ]