I hope you’re continuing to relegate your breathing, in….. and out….. It’s time for you to continue along your spiritual journey. If you did not get a chance to read my previous article on Heavenly Spirits, please take the time to do so by clicking here, because this article is an extension of that concept into a variant in a more similar vein to a Fairy-centric deck that you should recognize. Hang on to your incense, cause we’re about to perform some rituals! 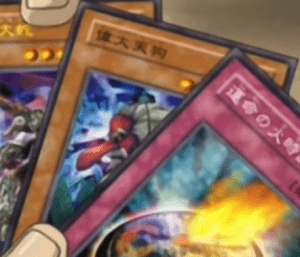 While Spirit decks normally use their unique quality of returning to the hand to avoid card effects or battle, this specific version of a fairy-centric spirit deck allows for the Spirits to wreck havoc on the field, before returning to the hand at the end phase to be used to negate opponent card effects with Herald! Add in the awesome ability of Aratama to provide at least one Fairy to hand per turn, and you have yourself a quick advantage engine that generates discard fodder like no-one’s business!

Not only does Nigitama act as an opposite of Aratama in a Ying/Yang sort of way with their types and attributes, but the two Spirits also partner extremely well to give a Herald deck something it never had before: easy rank 4 access! Take for example, the normal play of Normal Summoning Nigitama, using its ability to summon Aratama, search out Yamato-no-Kami. Banish a Spirit from the Graveyard, Xyz Summon any Rank 4 of your choosing. If you choose to go into Lavalval Chain, simply follow up the Xyz combo by detaching Nigitama to send an additional Nigitama from the Deck to the Graveyard, trigger both of their second abilities, allowing you to draw 2 cards! So for the price of your Normal Summon, a Fairy and a Fiend from your hand, you end up with an Xyz Monster, a Level 6 Spirit that can destroy an opponent’s Spell/Trap Card later that turn before returning to hand, and 2 draws.

While the above play may seem like just good ‘Theory-Oh’, there are many other good applications of Nigitama in a Herald deck. First off, it is the second LIGHT Fairy monster to qualify as an acceptable target for Transmodify to Special Summon Tethys, Goddess of Light, the other being Asura Priest. What Nigitama has over the original LIGHT Fairy is that it can replace itself with a draw if you control another Spirit before you activate Transmodify, which is easy with her effect granting an additional Normal Summon! Don’t forget you can always resort to using Manju or Senju to Transmodify for Thethys too!

Don’t forget that a lot of the original benefits to running a Fairy-based Spirit deck apply, with even more for a Herald variant! Access to Archlord Kristya could not be controlled more with the searchable Yamato-no-Kami, you have a Compulsory Evacuation Device every turn in the form of Rasetsu, in addition to easy access to teching Chaos monsters: what more could you ask for?

Core Lineup for a Spirit Herald Variant:
2|3 indicates that 2 or 3 copies should be considered.

*Ritual Searchers are suggested; however, there is a variety to choose from: Manju, Senju, and Preparation of Rites

This core lineup is centered around using the natural power of the Spirits to achieve great things, as soon as you lock down the opponent using Herald of course! The Deck loves having a searchable Level 6 to use as Ritual Material, and quite frankly, Advanced Ritual Art simply isn’t feasible in a Spirit-based Herald variant.

Possible Tech Choices:
Black Luster Soldier – Envoy of the Beginning: Same reasons apply here as in a generic Fairy-Centric spirit variant: it is powerful, you have an adequate amount of DARK’s and LIGHT’s, except in this variant, you love any massive attacker you can get!

Honest: This is not listed as a staple simply because it is one of those really good cards that can be cut in favor of a more diverse Spirit base. You can choose to run Honest, cycling it around with Krystya when possible; however, you may wish to add an Izanami to grab used Spirits out of the Graveyard.

Soul of Purity and Light: A Level 6 Fairy that opens up Rank 6 Xyz combos with Yamato-No-Kami or Herald of Perfection! She also fulfills the Level 6 characteristic to be used as a 1-card Tribute for the Ritual Summon using Dawn of the Herald!

Mudora: One powerful Fairy-Type monster that LOVES to have super powerful amounts of ATK. The issue in this specific build is that this Fairy requires a Normal Summon. Sadly, Normal Summons cannot be spared in this variant: you need every one you can get with the mass amounts of Spirits AND Ritual searchers. If only there was a cost-effective way of making your monsters better at defeating opposing threats for good…

Completed Example Deck:
For those who have survived the entirety of the second Strategy Guide concerning Fairy-Centric Spirits, congratulations on obtaining complete control of the Spirit World. Your rule was foreseen for some time now; your destiny is finally coming to fruition.
The link below is a screenshot of my personal Spirit Herald build. It may not be the best build for them, but it can serve as a baseline for your deck construction in the future: http://i.imgur.com/88BJder.png.