Now that you’re acquainted with the archetype as a theme, it’s time to check out how the Koa’ki Meiru are supported. This article will attempt to dissect and offer insight into themed support cards that have a chance of landing in your deck, and will hopefully guide you. There are many ‘fake techs’ to be wary of before embracing the core, be careful of cool cards that just can’t hold their weight! Without further ado, let’s tap into the potential of the Core! 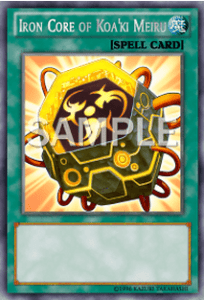 Before continuing on, if you have not read the overview article, I highly recommend it before beginning this one: Embrace the Core – Part One. It serves as an introduction to the general opinion of the theme, so that you may better understand how the deck may succeed.

Urgent Synthesis: “Return 1 “Iron Core of Koa’ki Meiru” from your Graveyard to the Deck. Special Summon 1 Level 4 or lower “Koa’ki Meiru” monster from your hand or your Graveyard.” Meet the themed Monster Reborn for the archetype. This card has a few things going for it. First off, you get to Special Summon from the hand or Graveyard as needed, and you get the chance to recycle a Core back to the deck! This does serve as a restriction; however, it is not unbelievably hard to meet as you should have at least 1 Core in the Graveyard if you manage to use your Core Transport Unit.

Koa’ki Ring: “Reveal 1 “Iron Core of Koa’ki Meiru” in your hand to select 1 face-up monster on the field. Destroy that monster, and both players take 1000 damage.” Meet the themed destruction spell. The recurring cost of revealing a Core is not too hard to meet, not to mention that this is far from the last time you will see that line. Basically, this one-for-one monster removal is helpful in key situations; however, it only functions to its fullest potential in those certain situations. It is a player preference tech card, so you may choose to run it if you want.

Iron Core Specimen Lab: “During each of your End Phases, destroy this card unless you reveal 1 “Iron Core of Koa’ki Meiru” in your hand. Each time a “Koa’ki Meiru” monster on the field is destroyed during the End Phase, its owner can add 1 “Koa’ki Meiru” monster from their Deck to their hand.” And this is where many new players to Koa’ki Meiru falsely begin. This is not a good card for the deck for many reasons, despite that it seems like a half decent tech. #1, you never want a Koa’ki Meiru to be destroyed during the End Phase, regardless of if you get a search or not. And if it survives the End Phase maintenance cost, you should have an Iron Core in hand anyways to save your monster from certain death. Please avoid using this trap of a tech card; however, if you must, I suggest pairing it with the beatstick variant of Koa’ki Meiru.

Core Compression: “Reveal 1 “Iron Core of Koa’ki Meiru” in your hand and discard 1 “Koa’ki Meiru” monster to activate this card. Draw 2 cards.” A simple draw spell should be good for the theme, no? But alas, this is yet another trap for Koa’ki Meiru duelists. Unlike many other draw cards that help the strategy get a boost at the beginning of the Duel, this Spell is highly limiting in that it needs to meet 2 conditions: having a Koa’ki Meiru and having a Core. This is a suboptimal way to begin a duel, and it can almost never be an effective topdeck. As a result, this card should be shelved far away from any sort of Koa’ki Meiru deck, as it simply will drag it down in the long run.

Core Overclock: “All face-up “Koa’ki Meiru” monsters you control gain 500 ATK. Once per turn, during your Main Phase, you can discard 1 “Iron Core of Koa’ki Meiru” to have all face-up “Koa’ki Meiru” monsters you control gain 1000 ATK, until the End Phase.” Meet one of the tech cards that can define a specific variant of Koa’ki Meiru just by itself. This spell card serves as an ATK booster to all “Koa’ki Meiru” monsters you control, and it allows you to increase their ATK’s even higher by fueling the Spell Card’s effect with a Core. Now if you’re thinking that pure ATK boosters are not viable nowadays, you would be correct if it didn’t raise your Level 4 monsters to an ATK around 3500. This allows almost any of your monsters to pose a threat to end the game then and there through sheer strength. This beatstick strategy really hasn’t been viable since the dawn of Yu-Gi-Oh!, which is what makes that specific variant so unique. This can also be splashed in as a tech card if Solidarity cannot be run in your Koa’ki Meiru deck.

Core Blaster | Iron Core Armor: “Equip only to a “Koa’ki Meiru” monster. If it battles a LIGHT or DARK monster, destroy that monster without applying damage calculation. When the equipped monster is removed from the field and this card is sent to the Graveyard, you can return this card to your hand.” | “Equip only to a “Koa’ki Meiru” monster. During damage calculation only, monsters that battle with the equipped monster lose ATK equal to the equipped monster’s Level x 100. If the equipped monster would be destroyed during the End Phase, you can send this card to the Graveyard instead.” And we’ve reached the last conceivable spells. The thing holding these two back is the fact that they are both Equip Spells, and Equip Spells do not function well in the current game unless they can maintain advantage. Sadly, neither can do that. Blaster just makes your monsters hate on LIGHT and DARK monsters even more, and Armor’s main use is to sacrifice itself instead of destroying a KM during the End Phase. If you’re considering running this card, simply choose to run something else that you can reveal for your Koa’ki Meiru during the End Phase!

These three are the Iron Core searchers, and which one you use is totally based on your playstyle. Please refer to the following table that hopefully will help you weigh the advantages and disadvantages of each:

So now that you’ve seen the potential gems hidden away in the spell lineup, let’s transition over to some of the more powerful support cards for the Koa’ki Meiru! 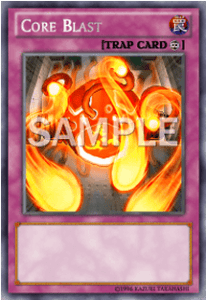 Automatic Laser: “When your opponent Normal or Special Summons a monster(s) with 1000 or more ATK, reveal 1 “Iron Core of Koa’ki Meiru” in your hand to activate this card. Destroy that Summoned monster(s).” The first themed trap card for the Koa’ki is their trap to respond to summons! This card has actually gained a bit of possibility due to the banlist dropping Bottomless Trap Hole further on the list, simply because it can respond to Normal or Special Summons as necessary. Its only cost is yet again the generic “reveal a Core”, which should be a condition that is easily met in most Koa’ki builds.

Core Blast: “You can only activate this card’s effect while you control a face-up “Koa’ki Meiru” monster. Once per turn, during your Standby Phase, if your opponent controls more monsters than you do, you can destroy a number of cards your opponent controls so that your opponent will control the same number of cards as you control monsters.” This is certainly one of the most unique traps of the archetype. If you have a Koa’ki Meiru at the beginning of your turn, and your opponent has at least 2 monsters, you can destroy their entire backrow and one of their monsters. This card has the potential to give you insane advantage, advantage that you should never take lightly. This is another one of the techs that fall to player preference. It can definitely give you a chance to come back from close to un-winnable situations; however, like many cards, it can be situational at times. It simply falls to you to decide whether or not it is worth it to risk a dead draw when it can win you the game.

Iron Core Luster: “Reveal 1 “Iron Core of Koa’ki Meiru” in your hand. Negate the activation of your opponent’s Spell or Trap Card, and destroy it.” Continuing upon the trend of the good trap cards, this is your themed answer to spells and traps. The normal “reveal a Core” line is the only condition, and of course, this is an awesome Counter Trap. This Trap Card is one of the reasons why control builds of pure Koa’ki Meiru can be so potent, and it should definitely considered in any build that runs a core.

Nega-Ton Corepanel: “Activate only if you control a face-up “Koa’ki Meiru” monster and have “Iron Core of Koa’ki Meiru” in your Graveyard. Negate the activation of an Effect Monster’s effect, and destroy it.” As a logical follow-up to the spell and trap answer, this is the equivalent of Gladiator Beast War Chariot for Koa’ki Meiru. However, both of the conditions for this Counter Trap are new for Koa’ki Meiru. The first condition, having a Koa’ki Meiru is not necessarily a normal play for the deck, as most builds prefer to Xyz Summon with the Koa’ki to ignore the End Phase maintenance costs. The second restriction is far easier IF you choose to run the Core Transport Unit tech, because it allows you to change a Core in your hand into a new one from the deck while filling the Graveyard with the required Core. But a 1-for-1 counter to any monster effect is definitely powerful.

Reckoned Power: “Reveal 1 “Iron Core of Koa’ki Meiru” in your hand. Destroy all face-down Spell and Trap Cards your opponent controls.” Now comes the themed Heavy Storm of the archetype. And yes, it is a Trap Card just like Delta Crow – Anti Reverse! Of course the condition of having a Core holds it slightly back, but a backrow wipe is a great trump card for an archetype built on gaining, then maintaining advantage.

Core Reinforcement | Koa’ki Meiru Shield: “Select and Special Summon 1 “Koa’ki Meiru” monster from your Graveyard in Attack Position. When that monster is destroyed during your End Phase, the controller of this card takes damage equal to that monster’s ATK. When this card is removed from the field, destroy that monster. When that monster is destroyed, destroy this card.” | “Activate only when your opponent’s monster declares an attack if you have 2 or more “Iron Core of Koa’ki Meiru” in your Graveyard. Destroy all face-up Attack Position monsters your opponent controls.” And here are the last 2 themed Trap Cards, based on Call of the Haunted and Mirror Force respectively. Please don’t ever run either of these over their generic counterparts. That is really all that needs to be said here.

So, did you manage to survive that comprehensive view of all of the themed spells and traps? I hope so. While the first article was an intro to the potential issues and general opinions on the archetype, this article is designed to open your eyes to seeing the hidden potential to the archetype. Just wait until Part Three when the first of many deck options is discussed! 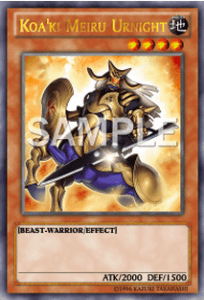