A New Card appears that’s an incredible support for “Raidraptor” combos!
The April 2015 issue of “V Jump” (currently on sale, it went on sale February 21st, 2015), comes with “Raidraptor – Tribute Lanius”, a new monster that can actively fight in battle with 1800 ATK, while possessing effects that a powerful support for combos and strategies for “Raidraptors”! 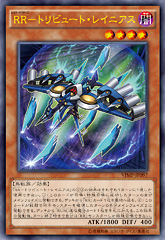 Raidraptor – Tribute Lanius
(ATK 1800/DEF 400)
During your Main Phase, if this card was Normal Summon or Special Summoned this turn: You can send 1 “Raidraptor” card from your Deck to the Graveyard. During your Main Phase 2, if this card destroyed an opponent’s monster by battle this turn: You can add 1 “Rank-Up-Magic” Quick-Play Spell Card from your Deck to your hand, but you cannot Special Summon monsters for the rest of this turn, except “Raidraptor” monsters. You can only use each effect of “Raidraptor – Tribute Lanius” once per turn.

Let’s also check out the features of the Deck “Raidraptor”, along with the charm and strength of “Raidraptor – Tribute Lanius”!
With this new card’s arrival, it’s even easier to perform certain combos! Let’s check out this movie to see how strong “Raidraptors” really are!

“Raidraptor – Tribute Lanius” is included in the April 2015 issue of “V Jump” (on sale February 21st, 2015)!
If you’re worried about your “Raidraptor” Deck, get your hands on this card as soon as possible!

※ At 4:18 minutes in in the movie, we accidentally sent the monster brought out with “Escape from the Dark Dimension” to the Graveyard, when it really should of been banished.

Also, at 5:45, “Frightfur Sheep”, while it could of escaped defeat by Special Summoning itself by its own effect, we let it stay destroyed in order to let the video go on.