Check out what kind of Beast-Type monsters you want to Special Summon, and consider the combos you can pull off with them! 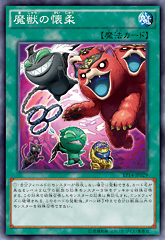 魔獣の懐柔 Majyuu no Kaijyuu (Obedience Schooled)
Normal Spell Card
If you control no monsters: Special Summon 3 Level 2 or lower Beast-Type Effect Monsters with different names from your Deck. Their effects are negated, and they are destroyed during the End Phase. If you activate this card, you cannot Special Summon for the rest of this turn, except Beast-Type monsters.

What kind of plays do you imagine?

For example, if you Special Summon 3 Level 2 monsters, you can follow up with a Xyz Summon for “Number 64: Ronin Raccoon Sandayu“, and then you can pull off a combo, by Special Summon “Green Baboon, Defender of the Forest” from the Graveyard or hand using its effect when the other monster Special Summoned that wasn’t used is destroyed by the effect of “Obedience Schooled”.

Even if your opponent has the monster with the highest ATK, have the “Kagemusha Raccoon Token” Special Summoned by the effect of “Number 64: Ronin Raccoon Sandayu” kill itself along with the opponent’s monster, you can pull off a reversal and make it even stronger by bringing out “Green Baboon, Defender of the Forest” during the End Phase.!

Also, you can Synchro Summon if you bring out a Tuner Monster with the Special Summon, you can follow up with a powerful Beast-Type Synchro Monster, like “Naturia Beast“!
You can Special Summon from your hand, “Egotistical Ape“, which can change its Level and combine it with a monster which can be Normal Summoned, not only can you easily Synchro Summon something like “Leo, the Keeper of the Sacred Tree“, but you can use the remaining monsters to bring out cards like “Naturia Beast” or “Number 64: Ronin Raccoon Sandayu“! If you activate the effect of “Number 64: Ronin Raccoon Sandayu” while “Leo” is on the field, you’ll be able to Special Summon a Token with 3100 ATK (※)! (※ If the monster with the highest ATK on the field is Leo.)

On the other hand, you can Tribute the three monsters Special Summoned by this card to Tribute Summon “Beast King Barbaros“, which lets you pull off a combo that destroys every card your opponent control. Furthermore, you can use them as the Tributes for Summoning the Gods “Slifer the Sky Dragon“, “The Winged Dragon of Ra” and “Obelisk the Tormentor“!

Please think about what ways you would use this card.

EXTRA PACK -KNIGHTS OF ORDER- (September 13th, 2014)
The Extra Pack for 2014, which contains cards released first in overseas Booster Packs, has arrived! It has more “Noble Knights” and “Noble Arms” just like the previous set “EXTRA PACK -SWORD OF KNIGHTS-“, but it also has a bunch of powerful cards that support a multitude of decks!! Also, last year’s Worlds Prize Cards are included as Extra Secret Rares!!
[To the product information page]