“Qliphorts” get stronger! They now have a new tactic that lets return a card back to the hand without letting the opponent chain in response! “Qliphort Alias”, a new card for the Qliphort Series comes in “The Secret of Evolution” (SECE) which comes out November 15th, 2014! 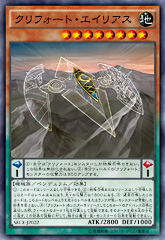 Qliphort Alias
[Pendulum Scale 1 ATK 2800/DEF 1000]
Monster Effects:
(1) You can Normal Summon this card without Tributing.
(2) If this card is Normal Summoned without Tributing or is Special Summoned, its Level becomes 4 and its original ATK becomes 1800.
(3) If this card is Normal Summoned/Set, it is unaffected by activated effects from any monster whose original Level/Rank is lower than this card’s current Level.
(4) When this card is Tribute Summoned by Tributing “Qliphort” monsters: You can target 1 card on the field; return that card to the hand. Your opponent cannot activate cards or effects in response to this effect’s activation.
Pendulum Effects:
(1) You cannot Special Summon monsters, except for “Qliphort” monsters. This effect cannot be negated.
(2) All “Qliphort” monsters you control gain 300 ATK.

Its Effect To Return 1 Card On The Field To The Hand Is Super Strong!

This is a powerful “Qliphort” Combo that starts by Tribute Summoning “Qliphort Alias”!!!

The “Qliphort” series gets even stronger! Consider the new powerful moves that can be pulled off with this card!