The effect of “Jiaotu, Darkness of the Yang Zing” allows you to call 2 of its allies from the Deck, enabling you to Synchro Summon Monsters of varying Levels!
The “Yang Zing” Series, capable of calling their Allies from the Deck, one after another, when they’re destroyed, and Synchro Summoning during the opponent’s turn (Read The Previous Introductory Article) … … New cards for the “Yang Zing” are included in “Next Challengers”, which comes out July 19th, 2014 for Official Card Game territories! 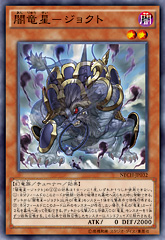 Also, “Jiaotu, Darkness of the Yang Zing” is a Level 2 Tuner.
Its effect which can Special Summon 2 monsters of various Levels can help set up for a Synchro Summon!

And, after bringing out monsters with the 2nd effect of “Jiaotu, Darkness of the Yang Zing”, if you bring out monsters using cards like “Call of the Haunted” and the like, you can Synchro Summon a Level 9 or higher monster!

Also there are other cards for the “Yang Zing” series coming out for you to enjoy!