Introducing “V Jump Edition 10” which you can send-in for in the December 2013 Issue of V Jump!

In the Super Sized December Issue of V-Jump On Sale October 21st, you’ll be able to send-in for “V Jump Edition 10”! 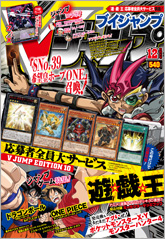 This Pack includes 5 cards that will supercharge your Yuma-style Deck! It includes a powerful card, Yuma’s new trump card “Number S39: Utopia ONE” which Yuma uses in the serialized manga “Yu-Gi-Oh! ZEXAL” in V Jump”!

Get your copy of the Super Sized December Issue of V Jump and apply for this Ultra Rare Pack that you can only apply for in this issue! Check how to apply in your copy of V Jump!

※ Applicants will have to pay a fee to apply.

Number S39: Utopia ONE
(LIGHT Warrior-Type ATK 2510/DEF 2000)
You can Xyz Summon him with 3 Level 4 LIGHT Monsters! Also, you can Xyz Summon him by placing him on top of “Number 39: Utopia”! He’s got a super sweet effect that can banish all of your opponent’s Special Summoned monsters, and then, inflict 300 damage to your opponent for each of those monsters that were banished! However, to activate this effect, your opponent’s got to have 3000 or more Life Points than you, you have to detach 3 Xyz Materials from this card, and pay until you only have 10 Life Points remaining! This trump card is for a turnaround victory!

SZW – Fenrir Sword
(LIGHT Beast-Type ATK 1800/DEF 1100)
When this card is Normal Summoned, you can Special Summon, in face-up Defense Position, a “ZW -” monster that’s currently treated as an Equip Card, making it great support for assembling the monsters you need! As well, if this card is in your hand, you can treat it as an Equip Card and equip it to a “Utopia” monster you control. And, when the equipped monster destroys an opponent’s monster by battle and sends it to the Graveyard, you’ll be able to add a “ZW -” monster from your Graveyard to your hand, allowing you to effectively set up for your next “ZW -” card!

Gogogo Goram
(EARTH Rock-Type ATK 2300/DEF 0)
It’s a Level 4 Monster with 2300 ATK! But, when it’s Summoned by any means, its Battle Position switches! You can combo it with “Gogogo Giant” to effectively Special Summon it in face-up Attack Position, or if you Normal Summon it (which’ll place it in face-up Defense Position), you can use it for a combo by Tributing it to Special Summon “Gogogo Golem – Golden Form“! Your “Gogogo Golem – Golden Form” will have 4600 ATK! When this card on the field is destroyed and sent to the Graveyard, you can use its ability to send 1 “Gogogo” monster from your Deck to your Graveyard!

Dododo Driver
(EARTH Warrior-Type ATK 1800/DEF 200)
It’s got an effect that’ll let you increase or decrease the Level of a “Dododo” monster you control, twice per turn! And it’s okay to target two separate “Dododo” monsters. You can only activate this effect during the turn it is Special Summoned by a “Dododo” monster’s effect, so plan to combo it with “Dododo Witch” and “Dododo Buster“, so you can set up Xyz Summons of varying Ranks! With Dododo Witch, you can bring out a Rank 3 to 5 Xyz, which Dododo Buster‘ll let you bring out a Rank 4 to 6 Xyz!

Xyz Change Tactics
(Continuous Spell Card)
It’s a Continuous Spell Card that lets you draw a card when a “Utopia” monster is Xyz Summoned to your side of the field! When you activate this effect, you have to pay 500 Life Points though, but it’s okay since if you drop “Number S39: Utopia ONE” and “Number C39: Utopia Ray”, and/or use a “Rank-Up-Magic” to Special Summon (which is treated as an Xyz Summon), you have the chance to draw multiple times per turn!