“Gravekeeper” Special Feature: They’ve Been Revived With New Cards from “Legacy of the Valiant”!

The incredibly old, yet still remarkably active, “Gravekeepers” have gotten supercharged with the advent of new cards in “Legacy of the Valiant”! Let’s make a “Gravekeeper” Deck that fits you! 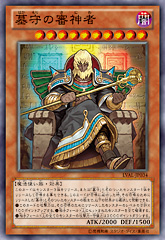 Gravekeeper’s Oracle
(ATK 2000/DEF 1500)
A super high Level Monster who transcends the limits of Level 8, he doesn’t need to just be Tribute Summoned with 2 monsters, it can also be Tribute Summoned with Three Monsters OR just 1 “Gravekeeper” monster. Then you can choose to activate effects A, B or C when this card is Normal Summoned, depending on the number of “Gravekeepers” that were Tributed!
(A) This card gains ATK equal to the combined Levels of all monsters Tributed times 100!
(B) All Set monsters your opponent controls are destroyed!
(C) All monsters your opponent controls lose 2000 ATK and DEF!

Introducing the new “Gravekeeper” Monsters!
All of the new monsters this time are DARK Spellcaster-Type monsters. Let’s check out the key features of each card!

Gravekeeper’s Shaman
(ATK 1500/DEF 1500)
This card’s DEF is equal to the number of “Gravekeeper” monsters in your Graveyard times 200! Also, while this card is face-up on the field, the effects of monsters, other than “Gravekeeper” monsters, cannot activate in the Graveyard! Also if “Necrovalley” is on the field, your opponent cannot activate Field Spell Cards, and Field Spell Cards on the field cannot be destroyed by your opponent’s card effects! This card is a powerful support card that’ll help develop a game field

New Spells and Traps Also Appear!
A powerful new Spell and Trap appear, that both rely on a “Gravekeeper” and the card “Necrovalley” to activate!

The Number of “Gravekeeper” and “Necrovalley” related cards that can work together to seal your opponent’s moves have increased!

What will you use to build you “Gravekeeper” Deck!