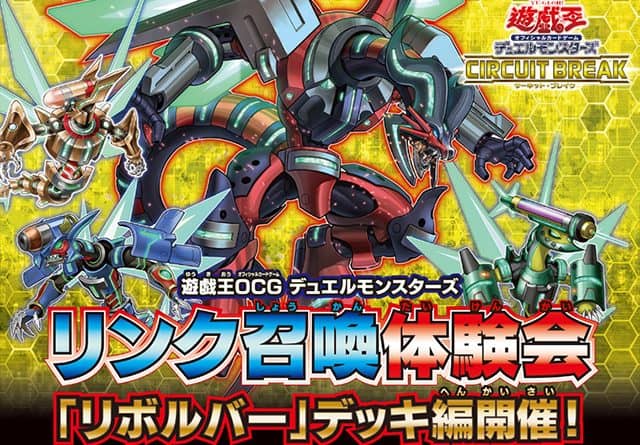 “Circuit Break” (on sale July 8th, 2017), contains many cards used by the leader of the Knights of Hanoi, Revolver, who appears in the “Yu-Gi-Oh! VRAINS” animated series!

With the ace monster, “Varrel Load Dragon” and its powerful effect, you can Special Summon your ally “Vullet” monsters! By continuing to Lik Summons, you can bring out Link Monsters and use the various effects of “Vullet” monsters for combos, allowing you to dominate the field! 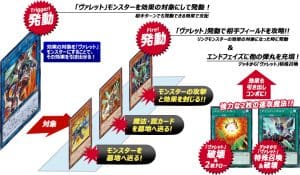 Activate (Trigger!) – Activate its effect to target “Vullet” monsters! (You can dominate your opponent’s turn as well by activating this effect)
Varrel Dragon: By targeting your “Vullet” monsters with an effect, you can pull out their effect!

Activate (Fire!) – By activating “Vullets” you can control the opponent’s Field!! (Target them with the effects of Link Monsters to activate them)
& Load another Bullet during the End Phase! (Special Summon a “Vullet” from the Deck) 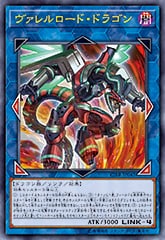 Varrel Load Dragon
[Link 4/Dragon-Type/ATK 3000]3+ Effect Monsters
(1) Neither player can target this card with monster effects.
(2) Once per turn (Quick Effect): You can target 1 face-up monster on the field; it loses 500 ATK and DEF. Your opponent cannot activate cards or effects in response to this effect’s activation.
(3) At the start of the Damage Step, if this card attacks an opponent’s monster: You can take control of that opponent’s monster to your zone this card points to, but send it to the GY during the End Phase of the next turn.

3000 ATK with 3 Powerful Effects!
Dominate the field with its combos with the 3 “Vullet”!!!
It can’t be targeted by the effect of monsters, and it’s also explosive since it lets you gain control of your opponent’s monsters to one of your Linked Zones!

And, there’s 3 powerful points of its effect that lowers ATK and DEF!

『1), the effect doesn’t end at the turn of the end, meaning this effect lasts』
『2), it can be activated even during the opponent’s turn, and your opponent can’t chain to the effect』
『3), By targeting your “Vullet” monsters you can unleash the powerful effects of the “Vullets”』

The combos it has with “Vullet” monsters are explosive, and are almost like loading and firing a gun… …

This time around, 3 “Vullet” monster appear. You activate each of their effects once per turn, respectively.

First off their effect that calls out allies is helpful for helping them connect with Link Monsters
(2) During the End Phase, if this card is in the GY because it was destroyed by battle or card effect and sent there from the field this turn: You can Special Summon 1 “vullet” monster from your Deck, except “[Same Name]”.

The other one is an intense effect that’s brought out by a Link Monster.Use their (2)nd effect to set up Link Monsters, while their (1) effects bellow allow you to dominate the opponent’s field!

These Quick-Play Spells powerfully support “Vullet” monsters, and can even be used during the opponent’s turn!!

An Impacting Shot For 2 Draws!! And Call An Ally At The End Phase With The Destroyed “Vullet”!

Squib Draw
[Quick-Play Spell]
You can only activate 1 “Squib Draw” per turn.(1) Target 1 “vullet” monster you control; destroy it, and if you do, draw 2 cards.

Call A “Vullet” From The Deck, And Destroy It To Draw Out Its Effects! It Can Also Be Used To Secure Link Materials!

Quick Revolve
[Quick-Play Spell]
(1) Special Summon 1 “vullet” monster from your Deck, but it cannot attack, also it is destroyed during the End Phase.

We’re going to introduce powerful cards that support Link Summoning “Varrel Load Dragon”!
A Link 2 Monster That Calls Forth High Level Monsters From The Graveyard! It lets You Aim For Further Link Summons!

Twin Triangle Dragon
[Link 2/Dragon-Type/ATK 1200]
2 Level 4 or lower Dragon monsters, except Tokens
(1) When this card is Link Summoned: You can pay 500 LP, then target 1 Level 5 or higher monster in your GY; Special Summon it to your zone this card points to, but it has its effects negated, also it cannot attack this turn.

Aim To Link Summon With Its Monster Deploying Effect!  Call Cards With The Same Name Allowing Your Next Move To Be Made!

Replenish Your Hand With More “Sniffing Dragon” From Your Deck!

Check Out This Video! The Answer For The Key Word Quiz At The Experience Event Is In This Video!

Check out this video before participating at the Deck Experience Event!
When you tell the staff at the Experience Event the answer for the Keyword Quiz displayed in the movie, you will receive a gift!

▼ An event where you can Duel using a Deck filled with the latest cards before they go on release! 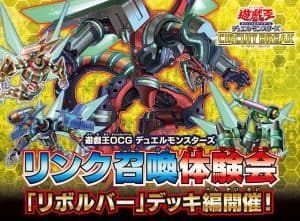 What Cards Will You Add Together For Your Deck?
Let’s add cards that fit you!───
Check the Card Database for cards already out and discover new possibilities!!

Circuit Break [On Sale July 8th, 2017]
Of course it has cards from “Yu-Gi-Oh! VRAINS”, but it’s also a basic pack full of vital cards for all Duelists (the 2nd one for the Fiscal Year of 2017)! It contains cards used by the protagonist, as well as “Gouki”, “Trickstar” and “Altergeist” cards, but it also includes the mighty ace monster and “Vullet” series used by the rival, “Revolver”! Also be sure to keep an eye on “Metaphys” who utilize banishing for splendid effects, and the “Crawlers” who connect for further Link Summons!
[To The Product Page]