This is the fourth in our series on handshots. We’ve reached ZEXAL now, which is still on-going, of course.

In the very first episode, we get examples form both Yuma and Shark. Yuma has Goblin Out of the Frying Pan, a nice general card. He never plays it, nor does Shark ever play his card – Salvage, which makes perfect sense with his Deck.

Kite gets a few in his first Duel (episode 13) as well. Using Photon Lead, he returns Shining Angel and Goddess with the Third Eye to his Deck. Both are fine here – plenty of targets for Angel and he could use Goddess with Twin Photon Lizard (whose anime materials are simply two Photon Lizards, not any Photon monster, meaning a fusion sub would be usable).

Gauche’s (Nistro) one-time use of Bounzers had him show one non-Bounzer card in episode 37. It was Copy Knight, which he discarded with Blade Bounzer. The Bounzers are actually Warriors (which still confuses me), so it makes some degree of sense.

In that same Duel, we get a shot of Droite’s (Dextra) hand in episode 38, though its hard to spot. In it we see Monster Reincarnation and Insect Imitation. The latter actually fits quite well. Even though they look like Insects, her Butterspies are actually Warriors, while Moonlit Papillon is an Insect. The Levels don’t match up, but its still far less random than many of these.

Kotori’s (Tori) only shown Duel in episode 81 has her with Icarus Attack in her hand. Seems random, right? Well, Kotori means “little bird”. Not quite as random as you’d think. Its a reference to her name.

This isn’t a hand shot, but Anna destroys her own backrow to Summon Hustle Rustle in episode 29. Included in it are Fiery Fervor (which fits her personality) and Attraffic Control (which makes me re-think Fiery Fervor and assume they just chose to two random things from Yuma’s Duel with Fuya).

Xyz Effect gets a nice cameo in IV’s (Quattro) Duel in episode 33, sent to the Graveyard for Level Doubler.

In episode 54, Tron (Vetrix) does a little jig when Yuma arrives. We can see his hand when he does so, revealing Burial from Another Dimension, Wall of Revealing Light and Mystical Cards of Light. The Heraldic Beasts later reveal some banishing effect, so the first card makes sense. The other two are generic, but still odd.

Katagiri’s Coach Xyz Monsters have some odd effects that result in showing off some other cards in episode 76. We see Beast King Barbaros and Mosaic Manticore, probably as a homage to Yu-Gi-Oh! R, given that we’re talking about two in the same episodes.

So there we have the ones I’ve spotted in Yu-Gi-Oh! ZEXAL so far. Perhaps we’ll get some more as the fight against the Barians continues! 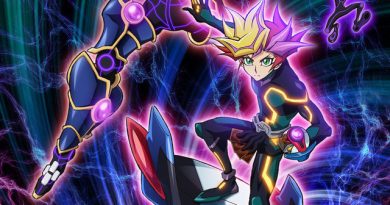