Hey all! Joenen here and today I’d like to talk about one of my favorite Pendulum Monsters!

Released in Clash of Rebellion, Magical Abductor appears to be a retrained version of Magical Exemplar, and retains her exemplary use of Spell Counters. Just about every attribute of hers has its own bewitching charm that I feel compelled to share. 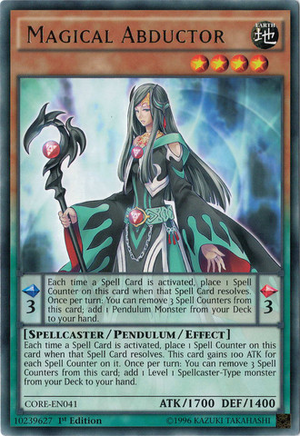 From a lore perspective, the story surrounding her transition from the stoic Magical Exemplar to the raging Tempest Magician, and now back to the subdued Magical Abductor, is unknown.  It is also unknown if there’s more to her connection with Night’s End Sorcerer beyond the Tuner + Non-Tuner relationship, and Tempest Magician’s appearance in That Whacky Magic! is cryptic to say the least. Abductor’s quiet beauty, lore, and the possible foreshadowing of future card interactions alluded to by her search effects, gives her an air of mystery that has me filled with anticipation.

Currently her most powerful effect that garners her attention is her Pendulum effect. Capable of searching any Pendulum monster and holding a scale just low enough to allow for level 4 Pendulum summons carries with it some rather obvious appeal.  Theoretically, she can work well with spell-heavy Pendulum builds that use deck-thinners like Igknight Reload, Upstart Goblin, themed spell searchers, etc. However looking deeper, there’s something that has me excited even more than just Pendulum searching.

The Spell Counter theme (if you can call it that) has a rather notorious balance issue.  You want to control a lot of monsters that make good use of your Spell Counters, which are built up by using a lot of Spell Cards.  However, when you build a deck, you quickly realize that opening too many monsters or too many spells renders you immobilized in the early stages of the game. I’ve piloted several Spell Counter builds that I’ve enjoyed up to a point, but this core issue still persisted. However now the potential for the theme has completely changed with the advent of the Pendulum mechanic.

Thanks to having attributes of both monster and spell, you can more flexibly use Pendulum Monsters to fill whatever void you’re missing.  Abductor is a perfect example of this.  Her ability to search Pendulums is obviously fantastic, but on top of this she’s also a bank for your Spell Counters, like a second Citadel of Endymion, which Tempest Magician and Arcanite Magician can make use of. Though she obviously has more utility as a Spell Card, she bears respectable stats as a monster, and gets stronger with each Spell Counter placed on her to further power up.  Her ability to search level 1 Spellcasters lets you easily search cards like Effect Veiler, who is also conveniently a tuner monster for which to make the aforementioned Synchro Monsters.

To illustrate all the things to love about Magical Abductor, I thought I’d present a sample deck that makes the most use of all her attributes. 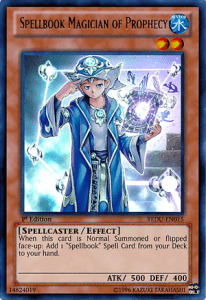 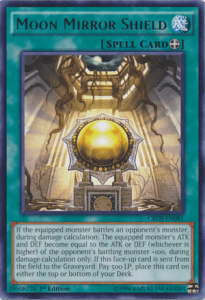 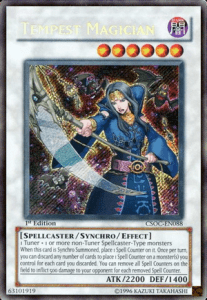 The deck is relatively simple on the face. Spam spells, build up counters, and generate advantage that you use to deny the opponent plays until you eventually overwhelm them with your Magical Abductors and extra deck monsters.  This deck is full of cards I love, but Magical Abductor is by far the star here.  Spellbook decks ended up cutting out most of the Prophecy monsters due to power creep essentially rendering the tarot theme inadequate. As a result the deck had become more stun-oriented until it eventually fell out of favor for being too slow to set-up and too ineffective at stunning, especially with the rise of anti-search cards that made it easy to side deck against the theme.  It’s not so much that this take on the deck is somehow the end of the problems for the Spellbook theme, but it’s a new spin on a familiar strategy that gives the deck a boost in offensive capabilities, and is an ideal way of showcasing Magical Abductor’s potential. Previously, Spellbook Magician had to often go things alone, being the deck’s most important normal summon. He has a lot riding on his shoulders, but now we have new cards to give him company and make his job less lonesome. 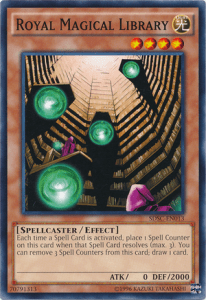 With its infamous history as a tool for OTK-based strategies, Royal Magical Library is a card that needs no introduction.  The card needs combos to start rolling, and that’s where Abductor and your Spellbooks come into play. Your ideal opening play is of course Abductor, RML, and Spellbooks to get the counters flowing. RML doesn’t quite get things started all by itself like Spellbook Magician does, but unlike our Magician, RML can generate continuous advantage so long as you keep it in play, which Magical Abductor helps to fuel.

Magical Abductor’s ability to grab more Pendulum monsters for more Spell Counters to generate is put on great display here, and complements other cards I love to use.  Eccentrick Archfiend is known game-wide as a simple and effective as removal for any single card and a high scale should you need her for that. Similarly Luster Pendulum, the Dracoslayer needs no introduction and allows you to further search your Abductors, thereby increasing the amount of monsters you can Pendulum Summon.   By searching Luster Pendulum, you can start summoning Abductor as an actual monster too when Luster destroys your scale to search a duplicate.  Between those 2 copies of Abductor and the Luster Pendulum, you have 3 Spell Counters on our Library, not to mention you’ve got counters from when you were building up Abductor.  A play like this can net you 2 draws easily. This all adds up to a very welcome boost to a Spellbook player’s arsenal, as now you have a spell/monster that both aids in adding cards from your deck to your hand (be it a tool for removal or a tool for Pendulum Summons), but also fills the role of a respectable beater that Spellbook decks have been so want to have, which doesn’t rely on your normal summon!

Another little gem I’ve come to enjoy in this deck (and others) is Moon Mirror Shield.  When sitting behind a Spellbook Magician + Spellbook of Fate, the common response is to force Fate’s activation by attacking the lone Magician. However with Moon Mirror Shield, this no longer becomes a viable option. The opponent is forced into actually investing some kind of resource into getting around Spellbook Magician, which can force them right into Fate’s hand. On the offensive end, MMS makes your Spellbook of Power much easier to use.  Though the boost is made moot, you will always be able to destroy anything in battle now that you aren’t bound by attack scores for Power’s search effect, and it gives you a way to out monsters without using Spellbook of Fate, (either because you can’t, or simply saving it for something more worthy of banishing). To further illustrate, equip it to the 0 ATK Royal Magical Library. Now you can both defend your Library and destroy cards as mighty as Raidraptor – Ultimate Falcon!

As for Synchro Summoning, Spellbook of Life + Effect Veiler can give me access to most any odd-leveled Synchro monster, but to get the even levels, I need Night’s End Sorcerer. While not the most ideal card, I enjoy the nod to the original Magical Exemplar, and Tempest Magician access is truly worth it to me.  Tempest Magician makes excellent use of Magical Abductor’s (and Spellbook Star Hall’s) qualities as a Spell Counter bank, which can steal games out of nowhere.  Similarly Arcanite Magician can destroy each card on the opponent’s field without exchanging its own counters.  These are just more cards I love that Magical Abductor makes several times better.

As for the rest of the Extra deck, I try to mix staple generic monsters with the Spellcaster extra deck monsters. This way I can access the generic power cards I need while also having access to strong Spellcasters that let me continue to use my Spellbooks.  Abductor being a Pendulum monster makes for nice synchro material that comes right back with a Pendulum Summon, and she’s Rank 4 Material when I really need one.  There’s not a single attribute about Magical Abductor that I can’t use to some advantage!

So what are your thoughts on Magical Abductor? Anything about her that you feel I missed? Do you use her in other decks? Do you have comments or questions about my deck list? Did you like the article? I hope so! Please feel free to leave feedback on the YGOrg Forum. I’ll see you there!