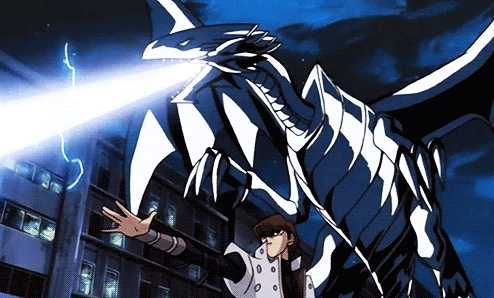 It took just a few days for one deck in the Speed Duel format to be solved. The first contender of this new meta appeared, eager to ask all their opponents a vital question;

The goal of the Blue-Eyes deck is to turbo out a high attack monster onto the board, then protecting it with traps such as Champion’s Vigilance. Most decks in the metagame will struggle to out it, as you keep beating over tribute fodder and use Vigilance to negate any threats.

As such, gameplay for the deck is fairly linear – Use Dragon Caller to ensure you have both Lord of D. and Flute of Summoning Dragon in hand so that Flute can summon out dragons from your hand, including the classic Blue-Eyes White Dragon.

Blue-Eyes will impose a lot of threat just by being on board, as it has the ability to shave away the majority of your opponent’s LP in one attack as well as beat over basically every other monster. Just because it’s big however, doesn’t make it unbreakable – Other popular cards like Gravekeepers’ Oracle and Riryoku can easily strip it’s attack, while Amazoness Swordswoman can just keep crashing into it in a seemingly unending game of “Stop hitting yourself”.

This is where Vigilance comes in, a card with the ability to either negate a Normal Summon or a Spell/Trap, Vigilance is essentially the classical staple from the TCG, Solemn Judgment, with a condition that you need to control a Level 7+ Normal monster to act as a counter to most outs. If Blue-Eyes is a card which forces most people to answer a question, Vigilance is just checking if they’re sure when they try to reply “Yes.”

Just from this baseline gameplan, we already have half the deck built out for us. It’s a simple strategy, which makes it easy to plan out with a skeleton like this:

As Vigilance helps us protect our dragon, ways to dig into the deck for multiple copies are extremely useful. Wonder Wand is a spell from the Yugi deck which can help faciliate this, as it can sack the Lord after you play Flute to draw an additional 2 cards.

Also from the Yugi deck is Blue Dragon Summoner, a monster who can tutor your Blue-Eyes upon being sent to GY as well as also being another Spellcaster for Wand. It’s not an ideal card to summon going first, but it can help you prepare for a Flute play the next.

So that leaves us with 4 cards wiggle room, 1 of which would be best served as another high level dragon to increase the odds of drawing it in your opening hand. From the starter decks, we have 2 options:

So that’s the majority of the deck solved already – It has a gameplan, and it’s built to try to enact it as soon as possible. However, the trade-off for this speed is the crux point it develops in it’s over-reliance on the Dragon Caller combo. If they negate the Flute? You’re in for a bad time.

The final 3 slots in the deck should be dedicated to ways to help mitigate this, with several options such as:

In conclusion, the Blue-Eyes deck is essentially solved by now, with only 3 cards which can really change as the meta evolves and starts to settle. I predict Blue-Eyes to be the dominant strategy for now as it’s peak power has already been discovered, but Gravekeeper and Amazoness do look to be very viable contenders which should rise in popularity with more experimentation.

I’m Tinkerbol, thanks for the Org for letting me post this article. If you want to join the discussion on Speed Duels yourself, feel free to at our Facebook group: https://www.facebook.com/groups/Speedduel/