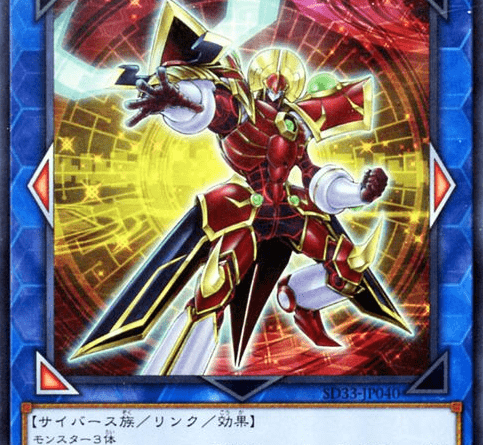 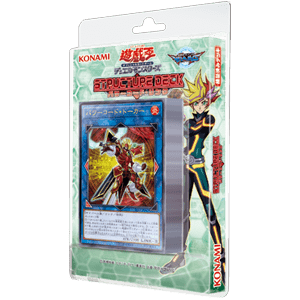 A product based on the hero of “Yu-Gi-Oh! VRAINS”, “Yusaku” when he fights in Virtual Reality… … Under the alias of “Playmaker”. The preconstructed “Structure Deck Powercode Link” has appeared on sale December 9th, 2017, and it’s centered around the Link Monsters and Cyberse Monsters he uses, intending to teach you the joy of Link Summoning!

It includes many new cards, as well as powerful cards that support Link Summoning!

Here, let’s look at the new cards and the idea of how to play this Deck, and then let’s go Duel, having fun via Link Summons!

First, let’s check this Playing Guide, which is an Image of the Combos based around the new Cards 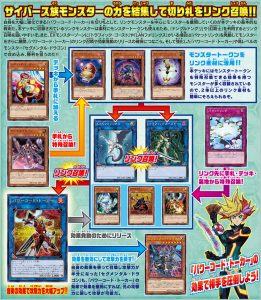 [Spoiler]
Link Summon An Ace Card That Concentrates The Power Of Cyberse Monsters!!

The Deck’s fundamental strategy is centered around bringing out monsters best used for Link Monsters, and then bring out your ace, “Powercode Talker”, who can great power itself up. You can use Tokens as materials for the Link monsters in this Deck, meaning you can aim to use “Dongle Acorn” and “Phantom Skyblaster” for Link Summons. If “Traffic Ghost” and “LANphorlinkus” are in the Extra Monster Zone, you can activate “Packet Link” to further expad your monsters, meaning you can Link Summon “Powercode Talker” and have the monsters needed to Tribute to activate its effect. Aim to seiz victory by using your strengthened “Powercode Talker” and the high Level Monster “Segmental Dragon”!!

Use Monster Tokens As Link Materials!!
This Deck contains many monsters with effects to Special Summon Monster Tokens, meaning you can gather 2 or more materials for a Link Summon.

Packet Link:
Special Summon from your hand, Deck or GY to a Zone your Link Monster Points To

Power Code Talker
Its own effect massively boosts its ATK!

Negate its Effects to return its ATK to normal!
“Segmental Dragon” halves its ATK when you Summon it with its own effect, and if you activate the effect of “Powercode Talker” to negate that effect, you can have its original ATK return allowing you to attack.

Use the Effect of “Powercode Talker” to suppress your opponent!
[/spoiler]

The Link Monsters that time either require “2 Monsters” or “3 Monsters” for their Link Materials. You can use any monster as Material, including Tokens, meaning you can easily call them out!

Powercode Talker
[Link 3/Cyberse/ATK 2300]
3 Monsters
Once per turn: You can target 1 face-up monster on the field; it has its effects negated until the end of this turn. Once per turn, during damage calculation, if this card battles an opponent’s monster (Quick Effect): You can Tribute 1 monster this card points to; this card’s ATK becomes double its original ATK during that damage calculation only.

Any Monster Can Be Its Materials! Link Summon With 3 Monsters!!!

Its Link Materials Are 2 Monsters! You Can Use Any Monsters As Materials, Letting You Easily Call It!!

▶ Point ◀
“Traffic Ghost” and “LANphorlinkus” are Link Monsters without effects. However, you can Call them using any monsters as materials, while their Link Arrows’ directions allow you to bring out monsters from the Extra Deck! Also, they’re strong at letting you easily send monsters that show their real strength in the GY, allowing you to arrange your next combo!

New Cyberse Monsters Appear One After Another!

Many new Cyberse monsters appear with effects related to bringing out more monsters, allowing you to easily Link Summon!

It Supports Link Summons With Its Effect That Special Summons Tokens!!

By Using Allies, You Can Special Summon Cyberse Monsters From The Deck!!

Garbage Collector
[ATK 100/DEF 1900]
You can target 1 other Cyberse monster you control; return it to the hand, and if you do, Special Summon 1 Cyberse monster from your Deck with the same Level as the monster returned to the hand, but with a different name. You can only use this effect of “Garbage Collector” once per turn.
[⇒ You can Special Summon a monster with the same Level as the monster you use! With the monster you return to your hand, if it’s like “Cyberse Gadget”, whose effect activates when Normal Summoned, you’ll get another chance of using that effect! ]

Special Summon It From The Hand Or GY! It Leads Into Link Summons!

Its Effect That Activates When It Leaves The Field Is Strong, It Draws 2 Cards!!

Flame Buffalo
[ATK 1400/DEF 200]
If this face-up card leaves the field: You can discard 1 Cyberse monster, and if you do, draw 2 cards. You can only use this effect of “Flame Buffalo” once per turn.
[⇒ If this card is sent to the GY when it’s used as a Link Material, you can use its effect to draw! Also, you can activate its effect if it’s returned to the hand with the effect of “Garbage Collector”! ]

It Supports Link Summons With 2 Effects Useful For Bringing Out Monsters!!

Lady Debugger
[ATK 1700/DEF 1400]
If this card is Normal or Special Summoned: You can add 1 Level 3 or lower Cyberse monster from your Deck to your hand. You can only use this effect of “Lady Debugger” once per turn.
[⇒ Its effect that adds allies from the Deck to the hand is strong! Choose to add monsters to your hand that can Special Summon themselves, like “Backup Secretary”, allowing you to aim for further cards being brought out and Link Summons! ]

Normal Summon A Monster During The Battle Phase! Pursue During Your Turn, And Disrupt Your Opponent On Theirs!

Anti-Alian
[ATK 1900/DEF 600]
Once per turn, during the Battle Phase, if this card battled a monster (Quick Effect): You can activate this effect; immediately after this effect resolves, Normal Summon 1 Cyberse monster. If this face-up card in its owner’s control leaves the field because of an opponent’s card effect: Draw 1 card.
[⇒ Its first effect can be used during your Battle Phase, allowing the monster to Normal Summon to attack! It it’s taken down by an opponent’s effect, you can recover via its draw effect! ]

A Level 4 With 2400 ATK! Its Effect That Prevents it From Being Taken Down By Monsters In The Extra Monster Zone Is Strong!

Its Own ATK Is The Key! Let’s Disrupt The Opponent With Effects That Sweep Away Monsters In The Main Monster Zones!

Segmental Dragon
[ATK 2600/DEF 2400]
You can Normal Summon/Set this card without Tributing, but its original ATK/DEF become halved. Once per turn, if this card was Normal Summoned/Set (Quick Effect): You can destroy this face-up card, and if you do, destroy all monsters in the Main Monster Zones with ATK less than or equal to the ATK this card had on the field.
[⇒ Its effect that can wipe out monsters in the Main Monster Zone is quite powerful and can even be activated during the opponent’s turn! Before a monster with highter ATK than this card is brought out, judge the proper timing and disrupt your opponent! ]

Seize The Wind! Storm Access — Seize And Call Forth An Ace Monster Just Like From The Animated Series!

Cynet Storm
[Field Spell]
Linked monsters on the field gain 500 ATK/DEF. The Link Summon of Link Monsters cannot be negated. If you take 2000 or more damage by battle or a card effect: You can shuffle the face-down cards in your Extra Deck and excavate the top card of those cards, and if it is a Cyberse Link Monster, Special Summon it. Otherwise, return it to its original position.
[⇒ It has 3 powerful effects that support Link Summoning! Its 3rd effect allows you to be like the animated series as long as you have an Extra Deck full of Cyberse Link Monsters! ]

It Has An Intense Effect To Bring Forth Monsters Of Level 2 Or Lower From All Over!!

Packet Link
[Normal Trap]
During the Main Phase 2: Special Summon any number of Level 2 or lower monsters with different names from your hand, Deck, and/or GY to your zones a Link Monster(s) points to. You can only activate 1 “Packet Link” per turn.
[⇒ If you have “Traffic Ghost” as the monster in your Extra Monster Zone, you can Special Summon a maximum total of 3 monsters to the zones it points to! It’s incredibly strong since it can call whatever Level 2 or lower monsters you desire, not only from your hand, but from the Deck and GY as well! By Special Summoning “Dongle Acorn”, you can also Special Summon its Token, which increases the Link Materials you can use by 1! Allowing you to further Link Summon! ]

Now, will cards will you combine to make your Deck?

Consider cards that work well together!
— Check the Card Database for cards that have already been released, to find new possibilities!!

STRUCTURE DECK Powercode Link
[On Sale December 9th, 2017]
The form “Yusaku”, hero of the animated series “Yu-Gi-Oh! VRAINS” uses to fight in Virtual Reality… …
Its name is “Playmaker”. The preconstructed Deck has appeared and it’s centered around the Link Monsters and Cyberse Monsters the hero uses, intending to teach you the joy of Link Summoning!! This time, the FIRE “Code Talker” monster appears! It also notably has many powerful cards that support Link Summons! Have fun with the hero’s Deck as you Link Summon!
[ To The Product Page ]