The Organization was assembled for several reasons. One reason was: to fight the spread of lies that occurs every time a change in Limits and Forbiddings rests upon the horizon. To that end, we’ve posted before about “what can make something recognizable as fake.”

However, we think we may have found something… trustable, regarding the OCG List.

As it would turn out, we were right.

The timeline of events was kept track of with a series of updates from us. I plan to keep them here as a historical chronology.

AUG 16, 4:14 AM EDT: It seems we now have confirmation about the OCG List. Again, thanks to our sources, especially to Snake. Remember, guys, this is for the OCG – there is a chance the TCG may have a different list!

One thing we do in hunting information is scour sources some may find obscure or difficult. In the depths of 2ch lies one… trustable person, with a history of leaking information and having unerring accuracy regarding the OCG’s F/L List. Because of the secrecy of his work, and his silently infiltrating matters to get the job done, we consider him a man who can make the impossible possible – we call him Snake. Since posting this, our little name name for him has gone completely widespread and he is now a household name. This is good, credit is now going where credit is due.

“Snake alleges that the following changes are coming. Snake also alleges that the following might not be complete, because he may have forgotten something. Snake sometimes also plays forgetful. Regardless, he’s one of the best we’ve got, and this is his information tonight.” This was what we would initially post 4 days ago. He did end up forgetting a couple cards, but the ones provided were all right on target.

Below is more info we had, at the time we had it.

–Update–
AUG 13 2013, 3:28 AM EDT: I’ve been handed some 2ch posts that hold that a “Fire Formation” card, or a related card, is relevant to and perhaps on the list of changes. We will see. The posts speak about a theme in V-Jump, involving a Magician – and also a card named “Suijin no Gofu” allegedly coming to the OCG. All of these other things mentioned – the theme, the card mentioned – they lend credibility to the situation, as “Suijin no Gofu” is the name of a card played by Reginald “Shark” Kastle in ZEXAL Episode 115 – and the OCG has an oncoming Duelist Pack shared by both Kastle siblings.

I am now collecting the important statements made by Snake and other individuals, and roughly translating them. 2ch jargon is some of the most difficult stuff one could ever encounter in a language barrier – but this is my job. I’ll be editing out Snake’s tripcode, so that he can lay low, as he requests.

193 ：転載禁止 (Snake) ：2013/08/12(月) 18:21:44.08 ID:sNKdcS4OO
エマージェンシーコールの件もあるし炎舞もあったようななかったようなだから完全ではないかもしれない
確実なのは禁止の奴らとトリシュ神風ビッグアイミラフォ剛健モグラ儀式術とか
I’m pretty sure there was E – Emergency Call and a Fire Formation card on the List, so this probably isn’t complete.
I am certain about those Forbiddings, as well as the placements of Trishula, Divine Wind, Big Eye, Mirror Force, Pot of Duality, Grand Mole, and Advanced Ritual Art, among other things.

Note: The user listed above as “Raiden” has a different ID on 2ch. We’re merely using “Raiden” as a term for him to help him lay low, like how Snake is laying low. Snake is considered able to sneak into places he shouldn’t be able to access. “Raiden” was likewise able to supposedly get a product that shouldn’t have been obtainable.

We have had images come in! Again, the source is C_Quince and his Photozou stream. 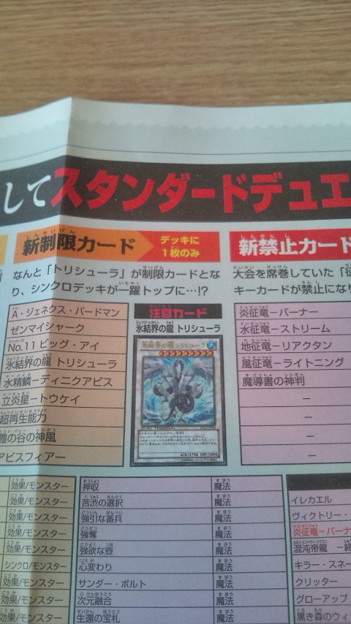 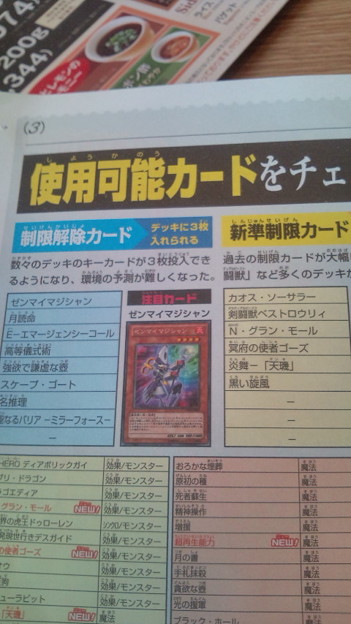 So that’s it! The OCG list is finally revealed. It’s been an exciting ‘list season’ and we look forward to having you all back later. Check out the rest of the site to see other things that came out today, and everything else we’ve posted, from official tag duel rules to OCG deck lists. Don’t forget to bookmark the Organization’s website so you can remember to check back often as we post new stuff every single day. If you check the side bar, you can find Player resources, and even a ruling helpline. Explanations of it can be found on the Ask Us page it links to. Hope you all like the list, those who had faith in us and were with us from the start made lots of good investments (Trishula!) and that everyone remembers to wait until the 20th to see the TCG list before they start preparing for YCS Toronto.

and if you like what you see, we set up a little donation button on the side ^^;.. running a site isn’t free so we are very thankful for those who take the time to help us out. 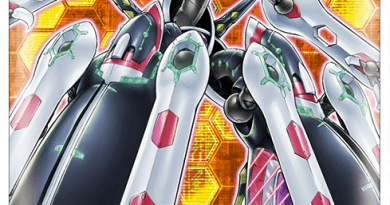