Basically, the effect you’re seeing toted around is likely a fake. 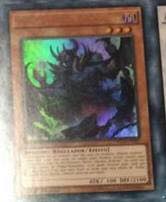 This is the only known image to exist. This is roughly the original size of the picture being pushed around, which is a clip from the massive leak a week or so ago. Kind of small and illegible and it’s in a foreign language.

A fair amount of the possible legibility has also been cancelled out by lens glare.

As well, the basis of the text being passed around is solely attempted conjecture and analysis done by Urthor from Duelist Groundz.

So while nothing can be done about the price jacking of Dante as a result of this, do realize that someone is trying to pass off inconclusive analysis as the real effect of the card, and this isn’t it.