These cards are Japanese Firsts that won’t be included in the overseas version “LVAL” (they’ll be getting the base 80 cards, but LVAL-JP081 to LVAL-JP085 are exclusive to Japan), and each of them are powerful cards. They also include “Number” monsters that haven’t appeared in the animated series or any of the comic books!

Today we’ll introduce the three new “Heraldic Beast” related cards!
Each of them is an incredibly powerful card, capable of aiding and starting potent combos!
This theme has significantly enhanced, due to the increase of various plays and combos!

Introducing The New Theme Monsters: World Premiere Cards from LVAL Edition
Debuting first in “Abyss Rising“, “Heraldic Beasts” got even stronger with “Cosmo Blazer” and “Collector’s Pack: ZEXAL Edition“, and now they’ve gotten really amped up with “Legacy of the Valiant“!
These Three “Japanese World Premiere Cards” are quite strong! 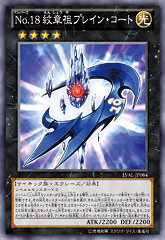 Number 18: Heraldic Progenitor Plain-Coat
(LIGHT Psychic-Type ATK 2200/DEF 2200)
Xyz Summon it with 2 Level 4 monsters! If there are two or more monsters with the same name on the field, you can use this card’s effect to choose one of them and destroy all other copies! You can also activate this effect during your opponent’s turn, allowing you to restrain your opponent even further! And, this card also possesses a Continuous Effect that prevents your opponent from Normal, Flip or Special Summoning a monster with the name of the chosen monster. And finally, if this card is sent to the Graveyard, you can use this card’s amazaing effect to send 2 “Heraldic Beast” monsters from your Deck to the Graveyard, allowing you to prepare a variety of combos!

Heraldry Augmentation
(Field Spell Card)
This Field Spell protects Psychc-Type monsters on the field from being targeted by Spell/Trap Cards. Once per turn, by discarding a “Heraldic Beast” monster, you can add 1 “Heraldry” Spell or Trap Card from your Deck to your hand, except “Heraldry Augmentation”! (Be careful though, during that turn, you can only Normal or Special Summon “Heraldic Beast” monsters and Psychic-Type Xyz Monsters.) Use it to unleash a powerful combo by adding “Heraldry Reborn” and “Advanced Heraldry Art” to your hand to perform an Xyz Summon!

Number C69: Heraldry Chaos Crest
(4 Level 5 monsters LIGHT Psychic-Type ATK 4000/DEF 1800)
A “Number C” monster with 4000 ATK who you should aim to Special Summon with using a “Rank-Up-Magic” card! When your opponent declares an attack, you can use this card’s mind-blowing effect to destroy all cards your opponent controls! Also, if this card is “Number 69: Heraldry Crest” attached to it as an Xyz Material, you can use its effect by detaching an Xyz Material to target an Xyz Monster. If you do, until the End Phase, it gains ATK equal to the target monster’s original ATK, its name becomes the same as the target’s, and gains it’s effect! If you’re in a pinch, this card’ll instantly turn things around!

Rank-Up with any Rank 4 using “Rank-Up-Magic Limited Barian’s Force”!
Number C69: Heraldry Chaos Crest is a Rank 5 “Number C” monster that you can Special Summon using “Rank-Up-Magic Limited Barian’s Force” using any Rank 4 Xyz Monster, so it’s usable in a wide variety of Decks! You can also easily Special Summon it by using “Number 69: Heraldry Crest” who requires 3 Level 4 Xyz Materials! It’s recommended you Rank-Up into this guy… … since it’s got 4000 Attack and its capable of destroying all cards your opponent controls when your opponent declares an attack!

… And speaking of new cards, the Organization will be hosting a tournament with cards from “Legacy of the Valiant” and “Number 47: Nightmare Shark” legal to use!