“Chronomaly” Special Feature: They’re Even Stronger with Japanese World Premiere Cards in “Legacy of the Vailant”!

These cards are Japanese Firsts that won’t be included in the overseas version “LVAL” (they’ll be getting the base 80 cards, but LVAL-JP081 to LVAL-JP085 are exclusive to Japan), and each of them are powerful cards. They also include “Number” monsters that haven’t appeared in the animated series or any of the comic books!

Today, we’ll be presenting the two “Chronomaly” cards! Both of these cards give a major power up to the “Chronomaly” series! 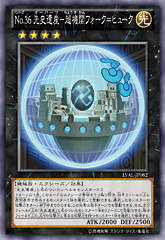 Number 36: Chronomaly Fork Hyuk
(LIGHT Machine-Type ATK 2000/DEF 2500)
Xyz Summon this card with 2 “Chronomaly” monsters! By using one of its Xyz Material, you can make the ATK of a face-up monster your opponent controls 0 until the end of the turn, allowing for one hekkuva combo with “Number 33: Chronomaly Machu Mech“! And since you can activate this effect during your opponent’s turn as well, you’ll be able to deal a huge blow to your opponent’s ability to attack! And if you Tribute 1 “Chronomaly” monster you control, you can use this card’s mighty effect to destroy a monster on the field whose current ATK is different from its original ATK!

Chronomaly Nebra Disk
(LIGHT Machine-Type ATK 1800/DEF 1500)
When this card is Normal Summoned: You can add any “Chronomaly” card from your Deck to your hand (that includes Spell Card)! You set up an incredibly strong combo by using this card with “Chronomaly Crystal Skull“! Also, if the only monsters you control are “Chronomaly” monsters, you can Special Summon this card from your Graveyard in face-up Defense Position, making it incredibly powerful support for Xyz Summoning! (※ During the turn you activate this effect, you can only activate the effects of “Chronomaly” cards. And you can only activate 1 of the effects of “Chronomaly Nebra Disk” per turn.)

Chronomaly Winged Sphinx
(EARTH Rock-Type ATK 1600/DEF 1900)
When this card is Normal Summoned, you can Special Summon a Level 5 “Chronomaly” from your Graveyard! During the turn you activate this effect though, be careful, because you won’t be able to Special Summon anything but “Chronomaly” monsters, but that’s okay since you can Xyz Summon “Number 33: Chronomaly Machu Mech“! And by combining him with the Level 4 monsters “Chronomaly Nebra Disk” and “Chronomaly Aztec Mask Golem“, you’ll be able to set up for the Rank 4 “Number 36: Chronomaly Fork Hyuk“, which allow you to pull of an explosive, potentially game-ending combo!

Chronomaly Moai Carrier
(EARTH Rock-Type ATK 900/DEF 1800)
If your opponent controls cards and you control no cards, you can Special Summon this card from your hand! So if your opponent only controls Spells and Traps, that’s fine, making it ridiculously easy to fulfill the Special Summoning requirements! Since it’s a Level 5 monster, you can use it to Tribute Summon “Chronomaly Winged Sphinx“, and then used as the target of that monster’s Normal Summon based effect, allowing you to easily Xyz Summon “Number 33: Chronomaly Machu Mech“!

What kind of “Chronomaly” Deck will you make?

“Chronomaly” Decks are great at bringing out one Xyz Monster after another, regardless of their Rank!
By combining them with the effects of “Number 33: Chronomaly Machu Mech”, you’ll be able to pull off instant game-changing reversals one after another!
Check out previous articles and what cards have already been released and build the Deck that fits you!

More “Chronomaly” Monsters appear in “Premium Pack 16” which was being sold early at Jump Festa 2014!

A few days back, on December 21st and 22nd, at the huge convention event “Jump Festa 2014”, Premium Pack 16 was on sale, and included “Chronomaly” cards!
If you got your hands on them early, you can build a new kind of “Chronomaly” Deck earlier than anyone else!
Enjoy our follow-up report on these cards and “Premium Pack 16”!