Hey all, it’s Deadborder, that other translator guy! You know…that one…guy…yeah. Since I haven’t written anything in FOREVER, today I’d like to bring up a fairly recent card that’s been having a lot of success in the OCG: Traptrix Myrmeleo. 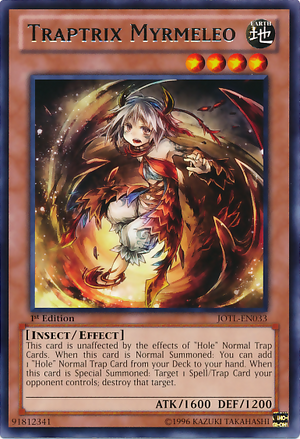 Little Miss Antlion is part of the Traptrix family, a neat little bunch that appeared in JOTL with effects revolving around the well-known series of “Trap Hole” Trap Cards. Although they do boast a pretty useful skillset, when compared to the power level of Dragons, Spellbooks, and Dragons again, they obviously fall flat. It’s quite a surprise, then, to see things like Bobby Kenny’s regional topping with a Traptrix-themed deck. But in the OCG, it’s Myrmeleo in particular that has been seeing quite the popularity boost.

oh but you want to know why don’t you

Well, there are quite a few reasons that Myrmeleo is the new hotness, so to speak.

The first, and probably biggest reason is the differing banlists between the TCG and the OCG. While a lot of our power traps, including Bottomless Trap Hole, were restricted to 1, Japan has had no such problem, meaning that heavy-backrow strategies are a bit easier to construct than they are over here. 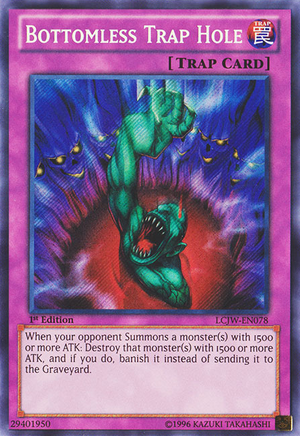 That part about Bottomless at 2 is especially important – because that’s one more power trap in the deck that is now searchable. Bottomless is, of course, a powerful Trap to begin with, but having another copy you can basically grab when you feel like it can be the difference between victory and defeat. It’s also important to note that it’s a handy counter against Return from the Different Dimension, which is still at 1 in both card pools.

Even in the TCG, though, the ability to have 3 Trap Hole Stratos is pretty great. Even if you’ve already grabbed your Bottomless, the second most popular Trap Hole choice these days is Void Trap Hole, which shoots down a lot of boss monsters that can otherwise rain on your own parade.

Another reason Myrmeleo may or may not be the target of many a neckbeard’s affection is its versatility. That is to say, it has a multitude of effects, in a manner similar to Ninja Grandmaster Hanzo. But while Hanzo searches monsters when Special Summoned, Myrmeleo backs up its initial effect with a free MST on Special Summon. This means that merely Special Summoning Myrmeleo aids you in a bigger push by clearing out pesky backrow that could otherwise shut you down.

In the TCG, this can be much more important – many decks, thanks to the banlist, do not run many Spells and Traps, so sniping that one Set card your opponent has can be the decisive blow in a tight game.

Finally, and most importantly, Myrmeleo is synergistic with a number of useful engines, allowing it to maximize its potential in all areas. Being a Level 4 monster on top of its dual effects means it fits right at home in decks that already have the goal of churning out Rank 4 Xyz monsters.

One deck it fits into quite well is Machina Gadget. Already known to be a popular choice for Rank 4 spam in the OCG, Myrmeleo keeps the plus train running by working as a “Trap Gadget”. Also, given that she’s an EARTH monster along with the Gadgets and Machinas, she helps the deck synergize even further with Redox, Dragon Ruler of Boulders, who can then grab you more advantage in the form of pitched Gadgets or a copy of Myrmeleo.

For a deck with a few more tricks up its sleeve, try adding Myrmeleo to a Ninja base! As mentioned earlier, Myrmeleo is quite similar to Ninja Master Hanzo – when you put these two together, you get a deck with sizable Rank 4 power and access to a variety of Traps! Both trap-searching monsters can then be used to fuel the Special Summon effect of Upstart Gold Ninja, who can Special Summon another Hanzo to grab another Gold Ninja to let you do it all over again.

Finally, if you’re looking for a way to make it easier to fit Myrmeleo into a deck, you’ve always got the suite of Redox and Maxx “C” to use! Both Maxx “C” and Myrmeleo are generally useful monsters that make easy Redox fuel, while Redox makes for one of the fastest routes for Special Summoning our antlion pal (or whatever other dead things you’ve got lying around). If I have to go into detail about why Maxx “C” is good though I swear to God

But hey, the next time you’re looking for a neat, versatile  tech for your deck, why not try out Traptrix Myrmeleo? It can really bring that little bit of extra oomph to a deck while also being a girl that is also an antlion which I think is kind of neat. Give it a shot in your next deck – you won’t be disappointed! I mean unless you put it in something that doesn’t make any sense but then THE BURDEN’S ON YOU and you will be eaten. 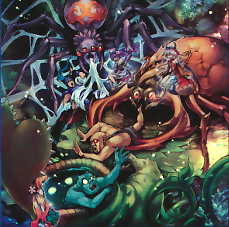 YOU COULD HAVE AVOIDED THIS