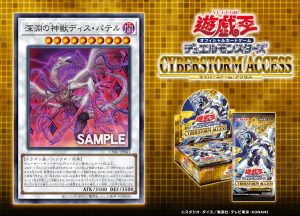 CYAC-JP041 深淵の神獣ディス・パテル Byssted Dis Pater (Bystial Dis Pater) [Kanji: Divine Beast of the Abyss Dis Pater]
Level 10 DARK Dragon Synchro Effect Monster
ATK 3500
DEF 3500
Materials: 1 Tuner + 1+ non-Tuner Dragon monsters
You can only use the (1) and (2) effects of this card’s name once per turn each.
(1) You can target 1 banished LIGHT or DARK monster; Special Summon it to your field.
(2) When your opponent activates a monster effect (Quick Effect): You can target 1 banished card; shuffle it to the Deck, then, if you were that card’s owner, destroy that monster. If your opponent was, negate that effect.

Note: Dis Pater is another name for Pluto, the Roman god of the Underworld, with Dis associated with the aspects of fertile land and mineral wealth, which ultimately got him associated with Pluto and Orcus.

These are all of course, ultimately the Roman equivalent of the Greek God, Hades, lord of the Underworld, the Dead and all precious jewels and metals.