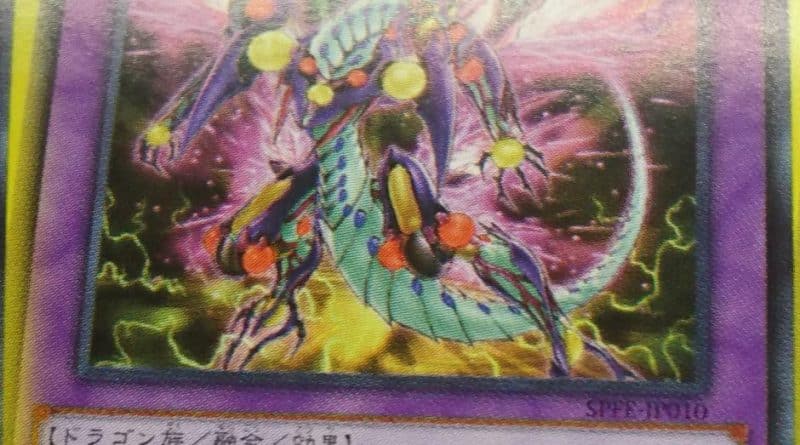 We showed you a poster for “Booster Special: Fusion Enforcers” less than 24 hours ago.

Now, let’s take that image, zoom in on parts, and ENHANCE.
(Translations provided by Atem and Ark.) 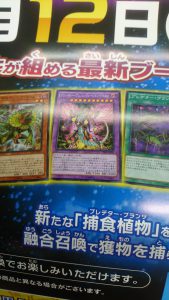 SPFE-JP010 Greedy Venom Fusion Dragon
Level 10 DARK Dragon-Type Fusion Effect Monster
ATK 3300
DEF 2500
1 “Predator Plant” monster + 1 DARK monster whose original Level is 8 or higher
Must first be Fusion Summoned.
(1) Once per turn: You can target 1 face-up monster on the field; its ATK becomes 0, also its effects are negated. These changes last until the end of this turn.
(2) If this card is destroyed and sent to the Graveyard: Destroy as many monsters on the field as possible (min. 1), then you can banish 1 Level 8 or higher DARK monster (other than this card) from your Graveyard and Special Summon this card from your Graveyard. 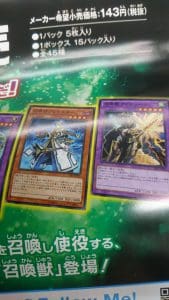 SPFE-JP026 召喚師アレイスター Shoukanshi Aleister (Aleister the Eidolon Summoner)
Level 4 DARK Spellcaster-Type Effect Monster
ATK 1000
DEF 1800
(1) During either player’s turn: You can send this card from your hand to the Graveyard, then target 1 Fusion Monster you control; for the rest of this turn, it gains 1000 ATK and DEF.
(2) If this card is Normal Summoned or flipped face-up: You can activate this effect; add 1 “Eidolon Summoning Magic” from your Deck to your hand.

Note: This card’s name is a corruption of the name Raiden, the God of Thunder and Lightning. 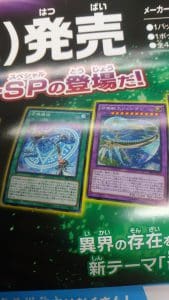 SPFE-JP033 召喚獣エリュション Shoukanjyuu Eryushon (Elysion the Eidolon Beast)
Level 10 LIGHT Fairy-Type Fusion Effect Monster
ATK 3200
DEF 4000
1 “Eidolon Beast” monster + 1 monster that was Special Summoned from the Extra Deck
Must first be Fusion Summoned with the above Fusion Materials.
(1) While face-up in the Monster Zone, this card is also DARK, EARTH, WATER, FIRE, and WIND-Attribute.
(2) Once per turn, during either player’s turn: You can target 1 “Eidolon Beast” monster you control or in your Graveyard; banish that monster, and if you do, banish all monsters your opponent controls with the same Attribute(s) as that monster.

Note: This card’s name is based off of the term “Elysion”, better known as Elysium, the happy afterlife of Greek Mythology for the virtuous and heroic.

TL note: Eidolon is a greek term that has seen use in popular media recently to describe the sorts of summonings we’re seeing here, though in its older greek use it wasn’t exactly for this. Note the kana for Raideen’s name also match one Final Fantasy kana usage that was localized as “Raiden” once upon a time, as well, driving home the Eidolon-esque imagery. Conversely, “Summon” and “Shoukan” on their own can’t sanely be made into theme names without causing an Archfiend-level card name cataclysm of daemonic proportions, so “Shoukanjuu” is what we’ve seen on card texts so far.

Clearer Picture of the “Shoukanjyuu” 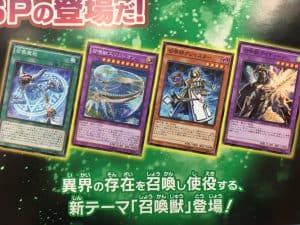