Ladies and gentlemen! Allow me to introduce to you the first ever Pendulum theme in Yu-Gi-Oh! Introduced in The Duelist Advent last year, Performapals have been struggling to find their own identity and embrace a coherent playstyle. However thanks to a few stellar new members, the deck is finally coming together, capable of pulling off glorious show-stopping action! Join me behind the curtain as I explore their performing arts!

On the surface, Performapals seem like they’re all swag and little substance. In fact the only thing they have in common is that almost all of them manipulate attack scores. This is largely due to their ties to the anime, as they always pair up with Odd-Eyes Pendulum Dragon to unleash fierce amounts of damage.

However, since Yuya’s signature Pendulum monsters, Timegazer Magician and Stargazer Magician, have restrictions in real life that they don’t have in the anime, they don’t make for very good Performapal support, and Odd-Eyes remains difficult to summon for them. So it’s taken a while for Performapals to get into the swing of things as a Pendulum Deck.

However, now the theme has a powerful “Magician” of their own, giving them an awesome groove to beat face to. 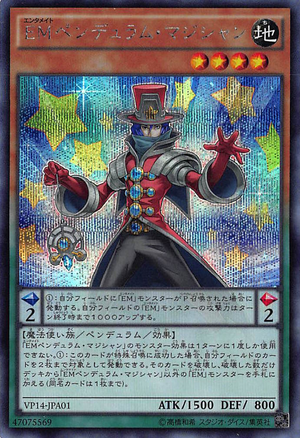 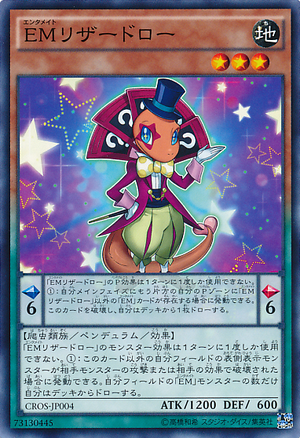 Performapal Pendulum Wizard and Performapal Lizardraw will form our ideal scale combination. Both as a monster, and as a Spell, Wizard is an extremely important piece of the deck. Once per turn, when Special Summoned, he destroys 2 cards on your field, to search 2 other different Performapal Pendulums from your deck. Since destroyed Pendulums go to the Extra Deck, each time you use his effect on them, you’re building up a small army in the Extra Deck, either to attack with, or to destroy with his effect for yet more searches! His Scale of 2 is the lowest the theme has to offer and is absolutely critical for the deck, due to its important level 3 players that you couldn’t pendulum summon before. Lastly, once a turn, he grants a 1000 attack boost to all Performapals for a turn when you Special Summon one, turning them from small fries to heavy hitters. Just how good he is will only get more apparent as we move forward.

Performapal Lizardraw is a near-perfect partner for Wizard. He destroys himself for a draw, which also sends him to the Extra Deck to be  Pendulum Summoned later for Wizard to destroy & search. Unfortunately his monster effect won’t kick in if Wizard destroys your cards (your opponent has to trigger that), but even with just his Pendulum Effect, he’s an amazing support card for Wizard.

It is really important that you keep Wizard and Pendulum summons in mind when we look at the next few cards. As I said before, Performapals at face value don’t seem too impressive, but together they can put on quite the show. Now that the scales are set, we can start storming the stage. 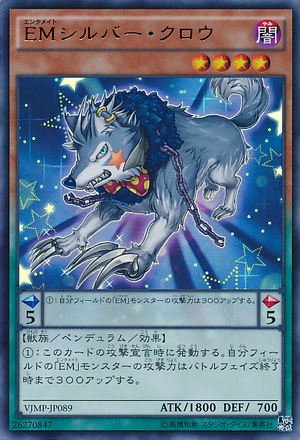 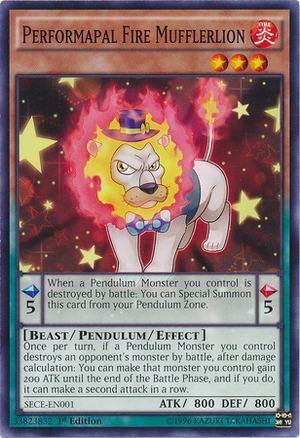 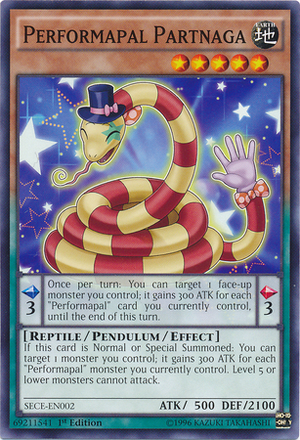 But the fun has only just begun. Performapal Partnaga is why Lizardraw’s scale of 6 is so important. Partnaga’s low scale is nice, but what’s even nicer is his monster effect to boost any monster by 300 ATK times the number of Performapal monsters you control. Remember, you’ve been destroying and searching with Wizard to try and assemble all these combo pieces. We have at least 3 ‘pals on board between Silver claw, Lion, and Partnaga, but you’ll also have to have a Wizard that you’ve been summoning over and over again from the extra deck too, among various Pendulums that Wizard has destroyed. Summoning monsters for a total of 5 ‘pals on the field is a simple feat, so Partnaga is easily capable of boosting any monster by a hefty 1500 points! When you Pendulum Summon, you build your chain as follows:

This way when Partnaga resolves, it’s still face up to count itself for the boost. Wizard will destroy it, exchanging it for another Performapal (and eliminating the attacking restriction too).

To sum things up. Silver gains 1000 from Wizard, and 1500 from Partnaga, and 300 when it attacks, for a total of 4600 points. Then Lion boosts it by 200 to attack again, triggering Silver’s effect a second time, for 300 more attack, giving it 5100! And why stop at 1 Partnaga? If you have a second one, you can grant another 1500 attack to Silver for a total of 6600 points of raw power! Even if your opponent somehow did survive taking two hits at those stats, you still have a field of Magician and Mufflerlion, both having gained a total 1600 attack on their own, to lower the curtain on the game. Even if you’re missing some of the combo pieces, you’re still racking up some obscene attack scores along the way.

Now let’s take a look at a sample decklist. 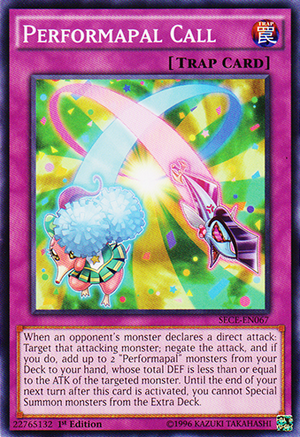 While the deck can’t summon Odd-Eyes, it can really use the searching it and Frontline Observer provide. You can use Fusion Conscription to search Odd-Eyesif you like, but there are other draw and search options to consider too.  Summoner Monk gets you right to Wizard and gives you some access to rank 4 plays if you need to. You won’t be Xyz Summoning too often, but you should always be prepared with staple rank 4s on hand. Regardless of whether you run Forbidden Lances, Mystical Space Typhoons, or Trap Stuns, you want something in here that can stop your opponent from disrupting your moves. Pot of Riches is yet an option to consider one of. Usually you want to be getting Performapals in to the Extra Deck instead of out, but in longer games, the recursion and free draws can be useful. Performapal Cast Change is another support option to consider. Usually when you draw a Performapal, you’d rather keep it, since at some point you will need to search it out anyways. Usually. However in the early game, if you don’t have a wizard yet, procuring one takes priority. The card is very flexible unlike other similar cards, as it pays for itself with one extra draw and has no restriction on the number of cards to return. On one hand, you aren’t guaranteed to draw anything as useful as the Performapal you send back, but on the other hand, you can think of it like a themed Upstart Goblin. Speaking of which, Reckless Greed is also an option you can try for. It caries a bit more risk and no protection compared to Performapal Call, but it can be activated whenever you want, and stacks well in multiples.

Performapal Call is a useful trap that activates upon an opponent’s direct attack, negating it, and adding up to 2 Performapals to your hand, so long as their total defense is less than the opponent’s monster’s attacks. Unfortunately you run the risk of it being sniped by opposing destruction effects, and it doesn’t actually remove threats. However, it only takes one Performapal Call to resolve to get just the cards you need to Pendulum Summon, and there are relatively few monster’s that can withstand the blunt force Performapals can dish out come your turn. The main issue to be wary of is that with that +1 in card advantage, you lose access to your Extra Deck for Pendulum Summon shenanigans on the next turn. However the searching is often more than worth it. Especially early game when you aren’t set up yet. Performapal Pinch Helper is similar to Call, except it can block more attacks, and is a continuous card you can use each turn. The downside is it doesn’t help you set your scales, and we should make space for actually disruptive traps, like Fiendish Chain. Feel free to consider it, but I think Call does the job more than well enough. 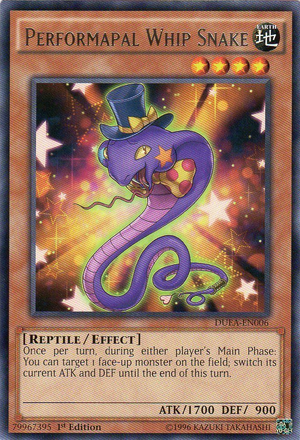 Performapals are a large theme by virtue of being used by a series protagonist. By that same token, many of them aren’t useful. The build here is a base you can build off of so feel free to edit it as you see fit. For example, I have 3 partnagas listed, but you could easily cut it to two or even one copy if you feel you’re fine with just a single 1500 atk boost. In that same way, Fire Mufflerlion is a card you theoretically only need one of, however drawing into it or Partnaga is one less card you need to search for. Here are a few notable options you can consider. I’m using Performapal Hammer Mammoth, since its a huge beater that’s easy to summon. Its actual effect is no substitute for spell/trap control cards, but it does remove pesky floodgates, equip spells, and field spells, which can be a set-back for decks that rely on them as disruption. He also protects other ‘pals from being hit with things like Dimensional Prison (even if he takes the hit himself). Performapal Whip Snake runs on swag and disruption, and is one of my favorite Performapals. Unfortunately it isn’t a Pendulum, but swapping an opposing monster’s attack with its defense makes for fun mind games. Performapal Turn Toad and Performapal Cheermole are two moderately useful Performapals, but unfortunately they are level 2. They can’t be pendulum Summoned without a Scale 1, so they’ll unfortunately have to stick to the sidelines until we can get one. Performapal Combatiger and Performapal Thunderhino are decent enough on their own, but they aren’t too synergetic. Tiger isn’t too strong on its own and if his attack doesn’t go through, he won’t be searching anything, compared to Front Observer, who can be used from the start of the duel on the first turn. However Tiger can be searched by Fire Formation – Tenki, giving you something free to destroy with Wizard. Performapal Friendonkey is yet another monster with a decent enough ability, but typically you want to run mostly Pendulum Performapals, so Friendonkey won’t have much to grab back from the graveyard. Performapal Bowhopper is an interesting new member, but he runs into the same issues as Donkey.

While Performapals still struggle with consistency, and being a somewhat fragile glass cannon deck, they’re showing some great potential and are finally developing a coherent strategy. They’re bound to continue to get support, which I can’t help but be excited for since the deck can already pull off some strong OTKs as is.  Truly, the fun has only just begun! 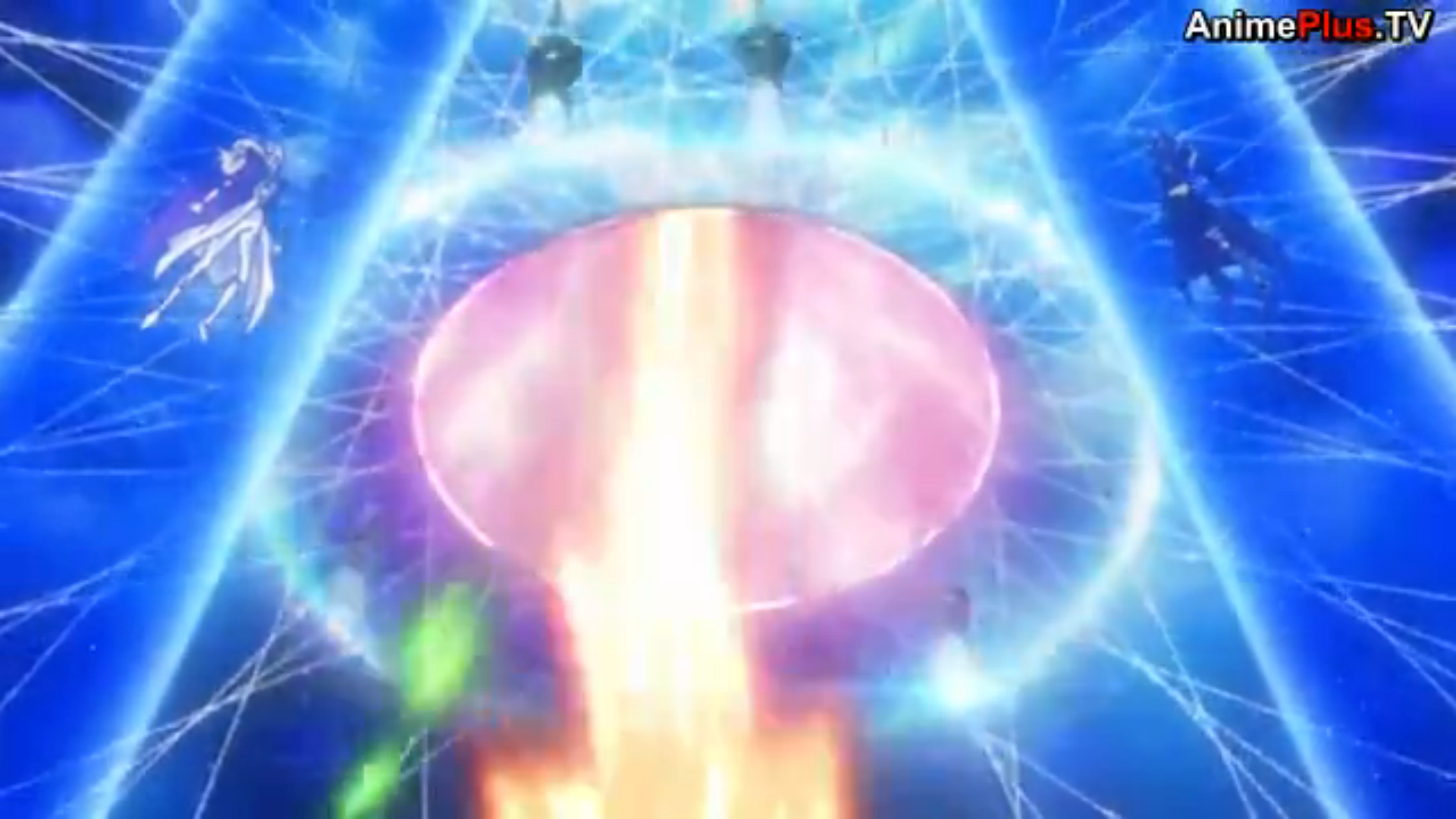 Swing, pendulum of souls! Draw the Arc of Light across the ether! Pendulum Summon! Come forth my loyal monsters!

I hope you enjoyed the article! What do you think of Performapals? Was the article helpful? Have you any strategies or tech choices I haven’t mentioned here? Let me know in the comments below, and check back next week as I tackle Yuya’s Rival’s theme: the D/D/D!