You’ve heard of Kaiju Graydle, but come check out what happens when you throw Wyrms into the mix! 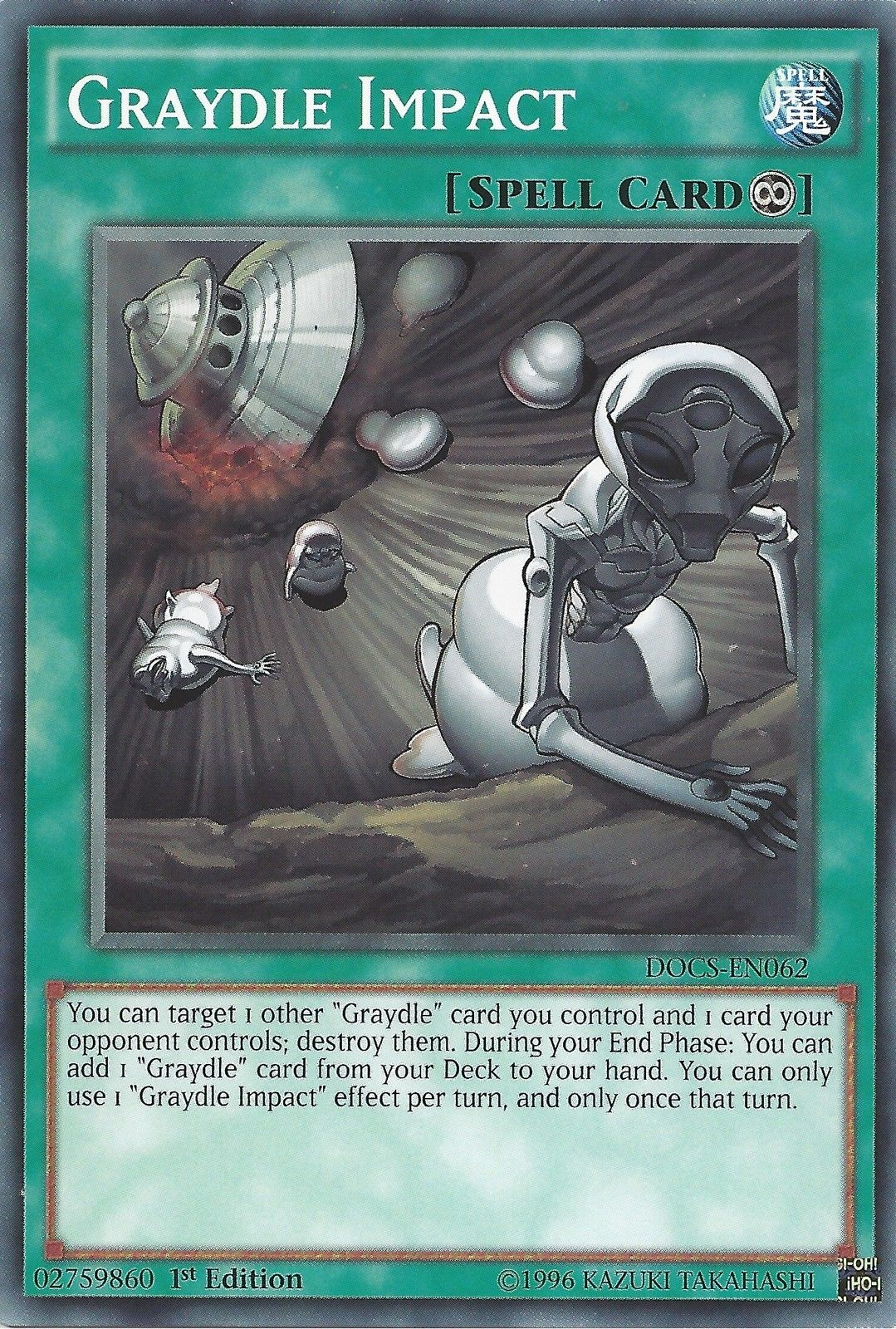 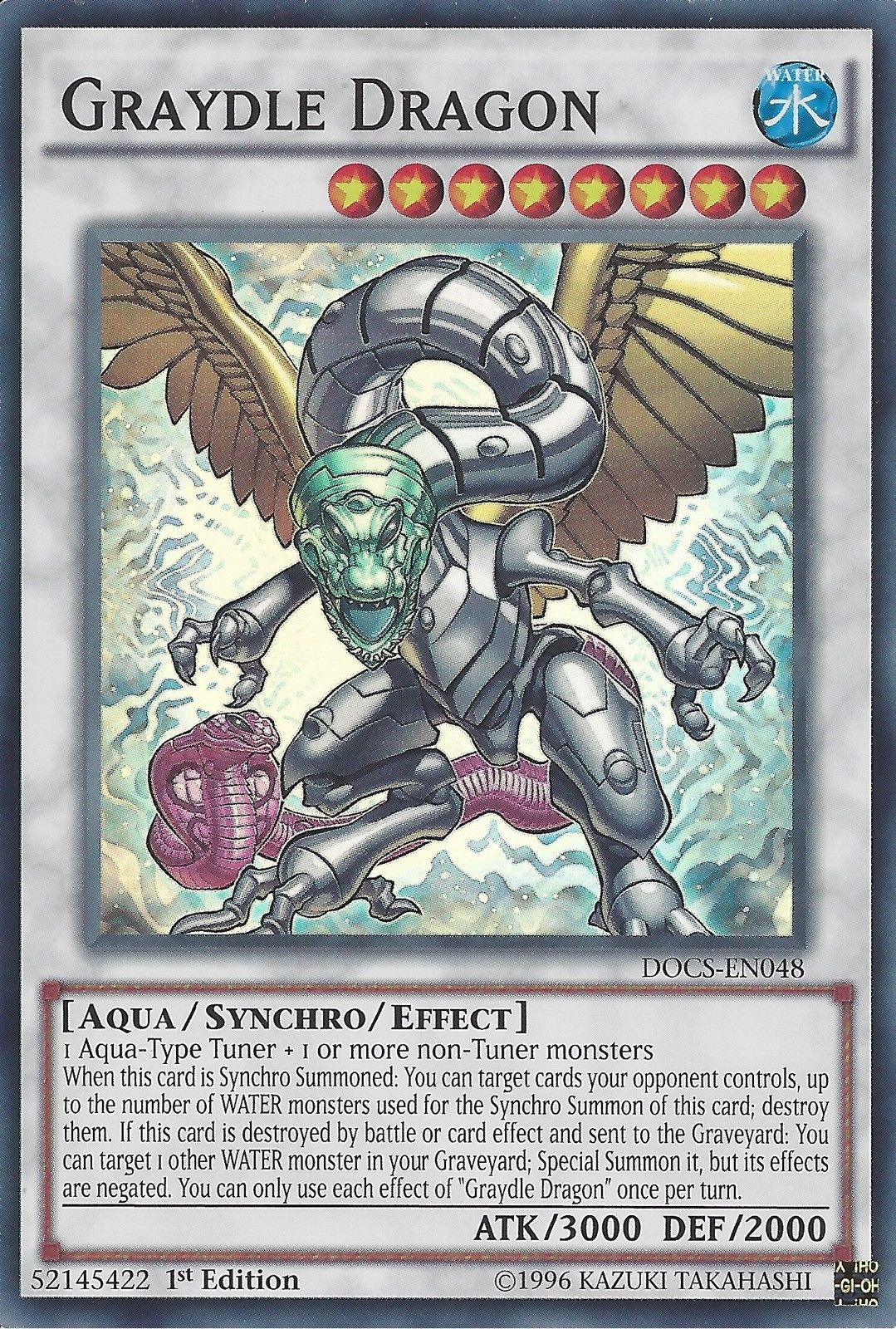 Welcome to another article, and this time we are shifting back to the watery depths, cause out from the puddles rise the slime animals more commonly known as the Graydle archetype. It is an archetype of WATER Aqua-type monsters based on the Roswell Grey Aliens that revolves around stealing your opponent’s monsters from right under their nose. Talk about nailing the execution of a theme from its background. They also have a bit of a Synchro element to the archetype, as they feature the first (and only) Aqua-type Synchro Monster! It just happens to be named Graydle Dragon, cause logic. Anyways, it quickly became a trend to splash in one of the recent TCG World Premiere archetypes, the Kaiju, in order to artificially give your deck boss monsters to steal. Since at the end of the day, you really were just giving them a boss for you to steal back moments later. This was definitely a great path to making the Kaiju archetype function effectively, but in all honesty, the Graydle monsters really only serve as a sidebar supporting our Godzilla overlords. But that all ends today, because we finally have a way to make the Graydle shine even brighter, while still fitting in those important Kaiju to eliminate threats that cannot be targeted. Everybody, let’s say hello to the theme based around the REAL Kaiju Monsters!

I’ll start by introducing the soon to be first member of the theme in TCG land, True King Ashnimazud, the Vanisher. Even though it hasn’t quite hit the TCG landscape, I don’t actually expect it to cause any large metagame shifts. Sure, it triggers the Fire King monsters, but it really only works effectively if you have other Wyrm-type monsters to abuse its second effect. And in which case, you’re just better off running a pure Wyrm-centric deck. But when you do have another Wyrm, such as another True King perhaps, it becomes all that much more potent. The monster pictured at right, which the Org has translated into Bahrstos Fuhrer, the True Dracoruler, serves as the other half of our neat True Kaiju engine. For each of them, you need to destroy 2 monsters among those on your field or in your hand, one of which must be its attribute, and then it is Special Summoned. If you happen to destroy 2 monsters with the same attribute, that means that you get an additional bonus effect! For the FIRE True King, that is a banished monster between the field or Graveyard. Similarly, for the WATER True King, that is 2 Spells or Traps banished from the field or Graveyard. But we’re more focused on the possibility of synergy here, so let’s focus on what it can do for Graydles. Well for one thing, either triggers your Graydle Eagle while summoning itself, and that is always a great way to steal an opponent’s monster. But the best part of this synergy is that Graydle Split actually has 2 additional amazing targets to destroy in order to summon 2 Graydle straight from your deck, since each of the True Kings has an additional effect that only activates when it is destroyed by a card effect. Such a nice coincidence there. 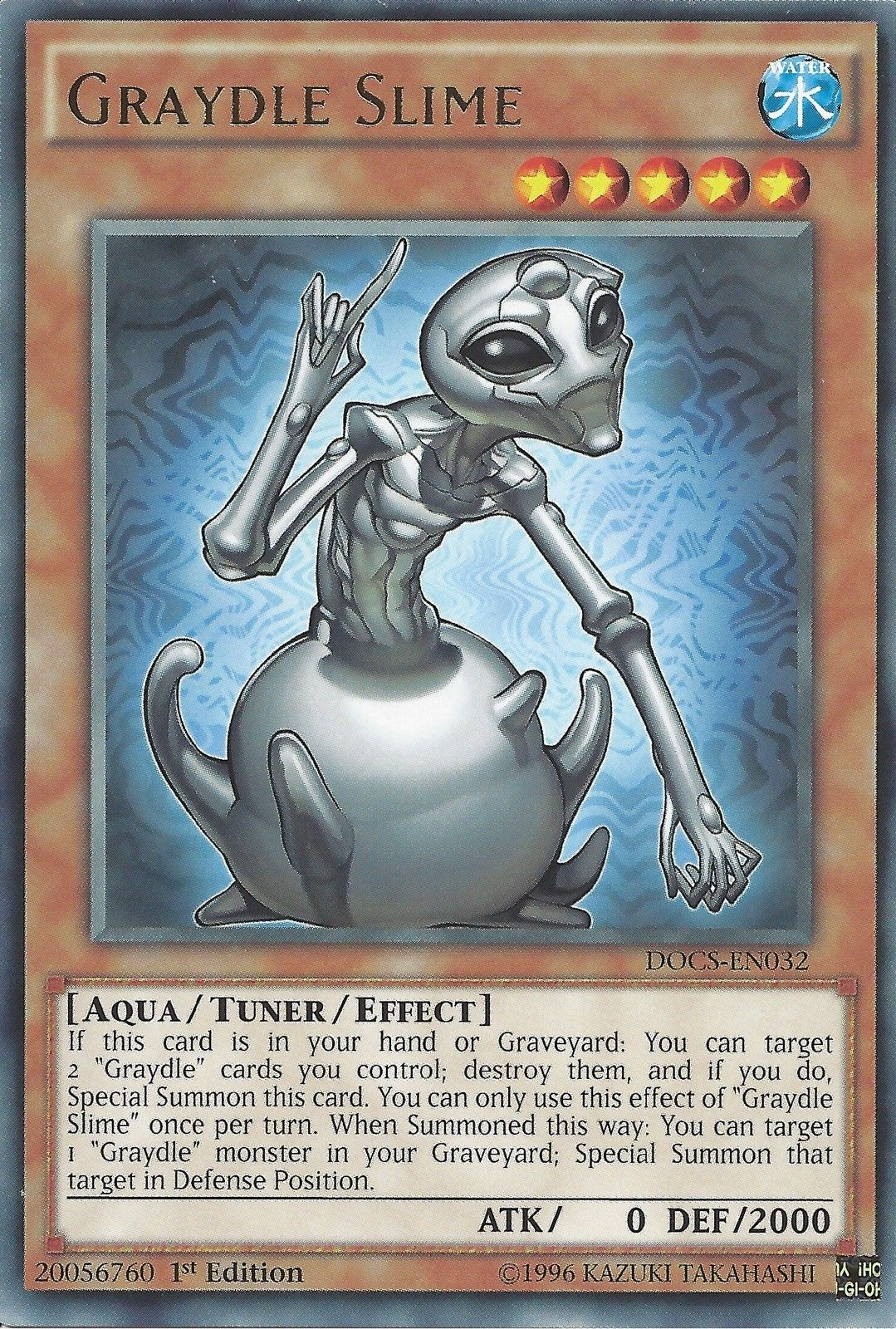 On top of all of these neat bits of synergy between the three archetypes/themes, the Graydle are going to be getting even more support in an upcoming booster set, Invasion: Vengeance. Remember folks, when new cards come around, legacy themes can sometimes benefit even more than you’d expect. Just take a look at the legacy support for Graydle – the most important of which is Graydle Slime Jr. It appears to be the amorphous child of Graydle Slime, as it shares the tuner status and similar body features. This new monster even gives you Special Summoning power from the Graveyard in order for you to bring back the non-tuner materials that you require, just like daddy. The best part is, you can even bring back another copy of itself, and Xyz Summon into Treatoad. Yup, this little guy can find a use outside of Frogs since it is a powerful omni-negator for all WATER decks, but it works particularly well in Graydle due to the entire archetype being Aqua-type. This gives the deck even more power, but in particular, it gives the archetype a ton of disruption potential, because it now has the ability to defend its own power plays. So let’s recap – this strategy gives your opponent boss monsters, steals them back, Synchro Summons into field-clearing Dragons, Special Summons Wyrm after Wyrm, banishes your opponent’s monsters or Spells and Traps without targeting, and Xyz Summons into an omni-negator. Oh, and did I mention Graydle Impact which lets you destroy or search every single turn? The key takeaway is that this deck truly does have quite a wide range of options, and it is definitely a force to be reckoned with for an unprepared opponent. 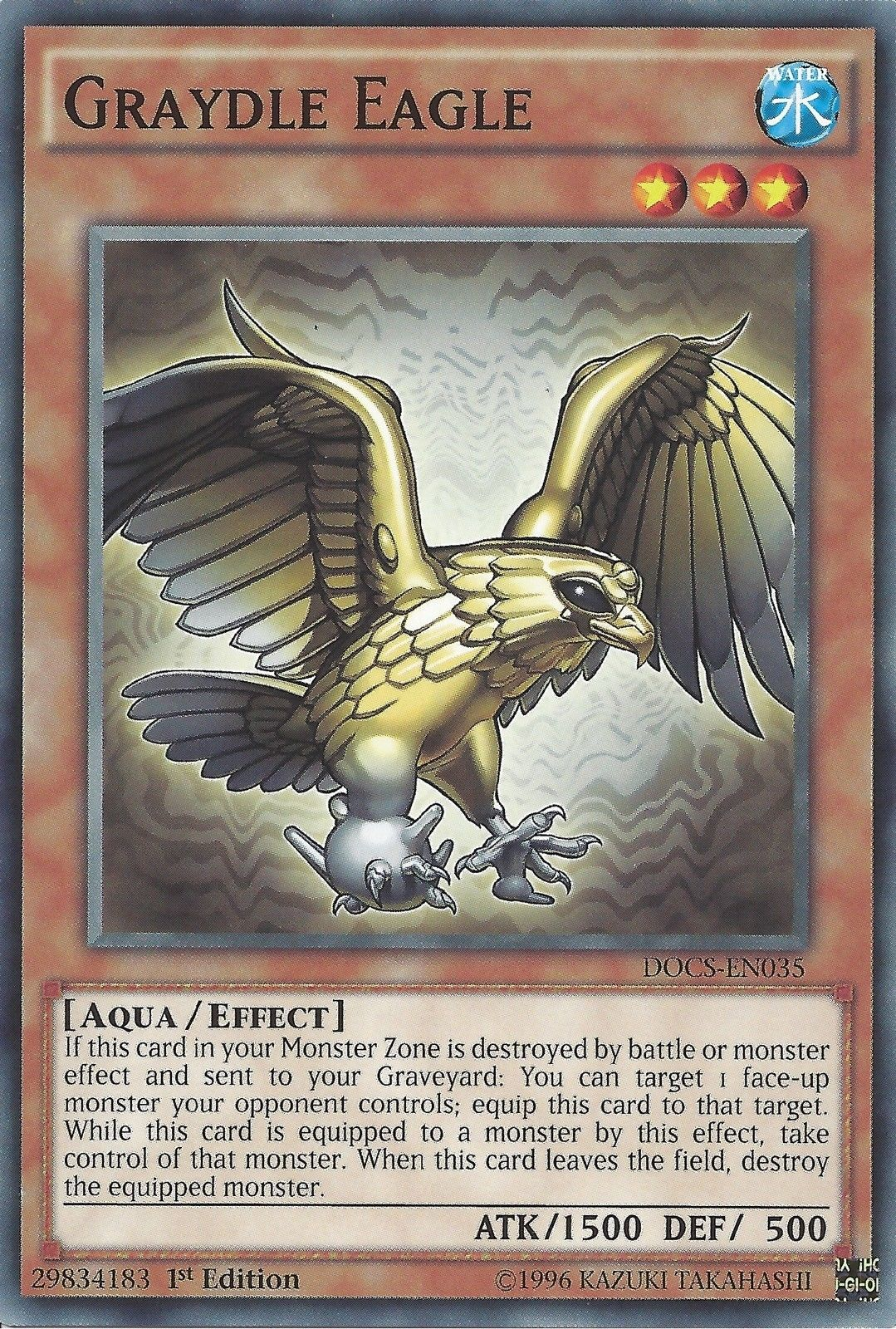 Now I’ve briefly brought up a ton of the individual cards, dipping a tiny bit into the strategy, but you’ll notice that I don’t have as much indepth descriptions as my past articles. Simply look at the card design for your answer – Graydle is a very straightforward archetype: they die, you steal your opponent’s monsters, you win. Thus, I’d much rather spend more time in this article talking about card advantage and game sense that applies to this deck, but also in general. You see, many of the monsters we are running are summoned at hefty costs, especially with a build like this. Cards such as Graydle Slime or True King Ashnimazud, the Vanisher require heavy investments: you need to destroy two cards just to be able to Special Summon any of them. So how do you decide the correct time to strike and move forward with your gameplan?First off, you need to ensure that your plays will not be for nothing. If you do decide to activate any of these high-risk monsters, you need to be sure that your effect will resolve properly and in its entirety. You do not want to destroy 2 Graydle, only to have your Water True King’s summon be fruitless due to a rouge Bottomless Trap Hole. BUT, you must be aware of your own abilities and weaknesses as this True King Graydle Kaiju strategy is a particularly passive deck. You sometimes must rely upon your opponent to summon out strong monsters for you to then steal to get back into the duel. Just remember, you need to be walking the fine line between luring your opponent in and making strong plays of your own. Never forget: you can also turn to your own Extra Deck as well to summon out boss monsters. As an example, Phantom Fortress Enterblathnir serves brilliantly with your True King monsters, since they all happen to be Level 9. If you happen to summon out the WATER True King by destroying another copy, you already have your two Level 9s for your Xyz Summon! And never forget using Graydle Split to get out materials for an Xyz or Synchro Summon.

So in conclusion, with this strategy you have options, but you need to play smart. I cannot drill this idea into your head enough. On paper, Graydle may seem like a beginner’s deck, since you really have simple effects. But in terms of actual strategy, sometimes the monsters with the most simple effects can be used in the most elaborate combos. To use this deck properly, you have to know how to bide your time, analyse the threat your opponent poses at any given point, and then choose your plays wisely. This advice can even be taken to heart for whichever deck you choose to build in the future. But enough about generic deckbuilding and play, let’s cover the key cards and additional techs for this slimey mashup! 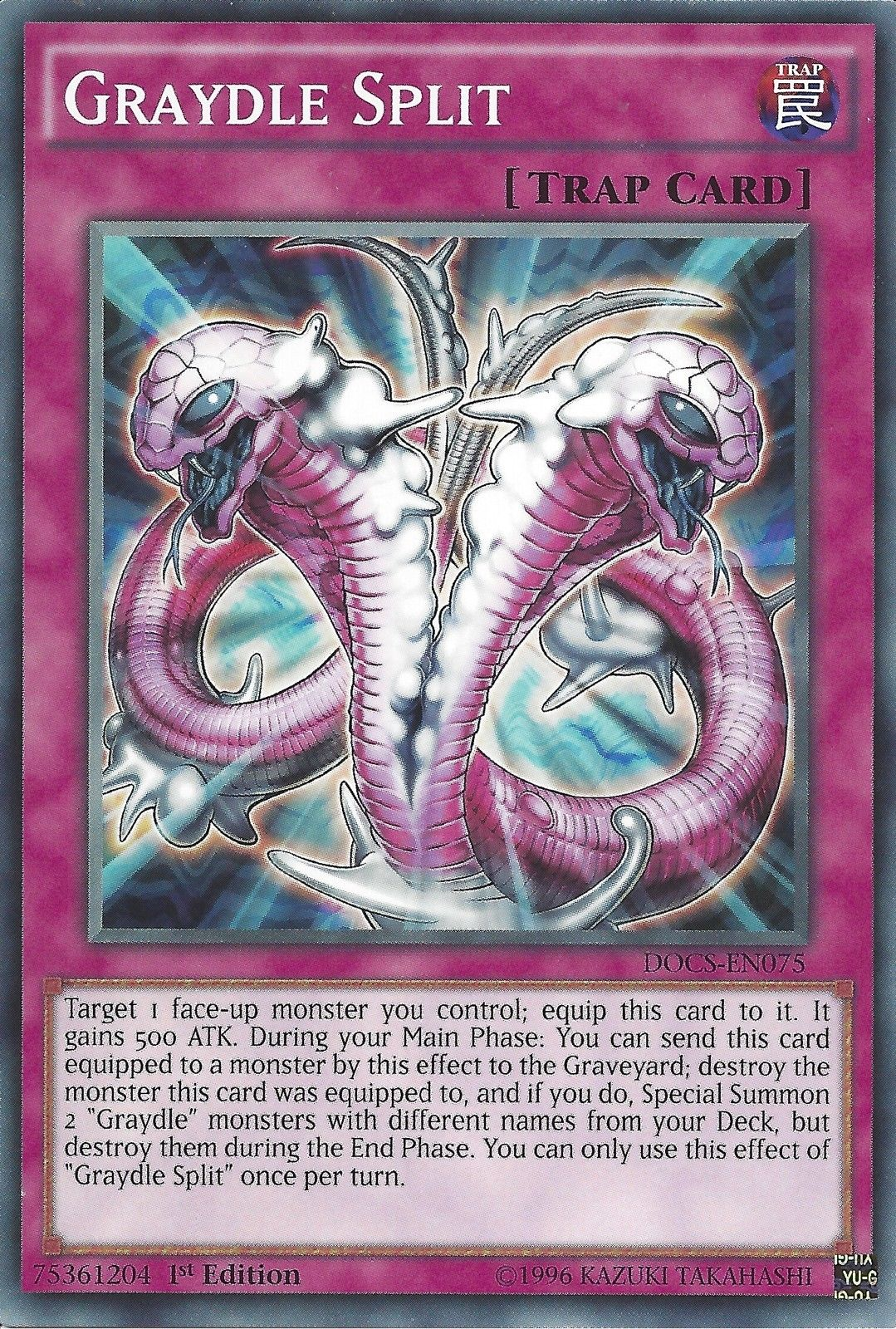 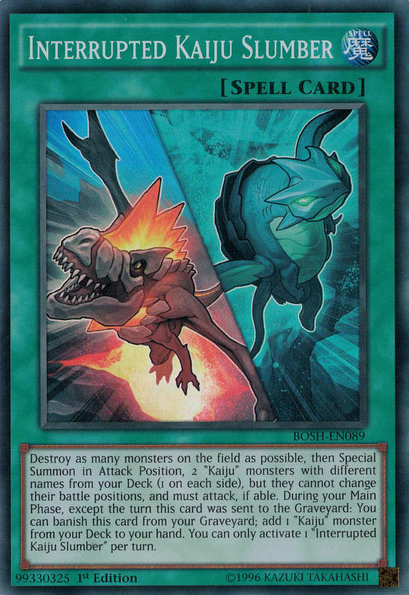 Most of these additional tech options work well to augment the strengths of your deck. Some are a bit more far-fetched than normal, but not all of them. 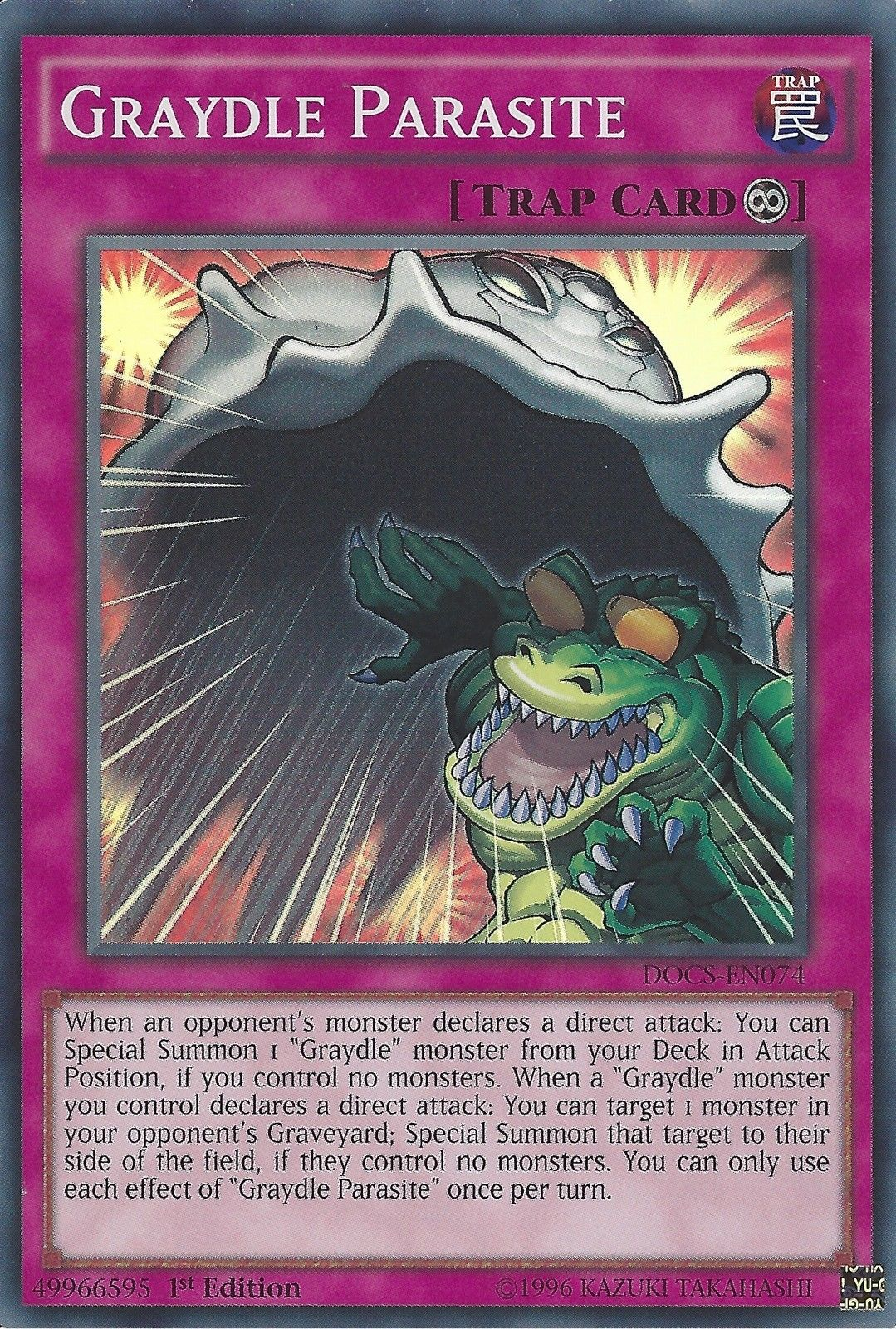 Check out the spoiler below for a sample decklist: 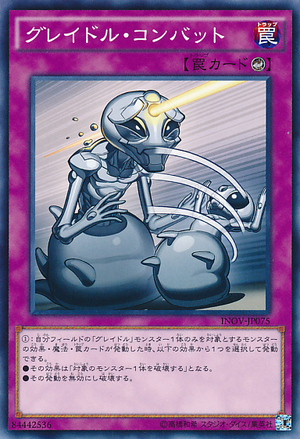 As always, the above list is just my personal build. The Graydle archetype may be finnicky, but it is always something that can be really fun to play if you play against opponents that tend to leave strong monsters out on the field! Until the next time, keep innovating and building creative decks! Most of all, just enjoy dueling for the fun that it can be!

Reminder, I also take suggestions for future CDS articles! While I will not run out of cool ideas, I do want to be writing articles about strategies you are interested in. So if you desperately wish to see a CDS article about the archetype, theme, or strategy you love, feel free to private message me on the YGOrg Discord server or the YGOrganization Forums with your ideas to keep under consideration: my username is Quincymccoy. 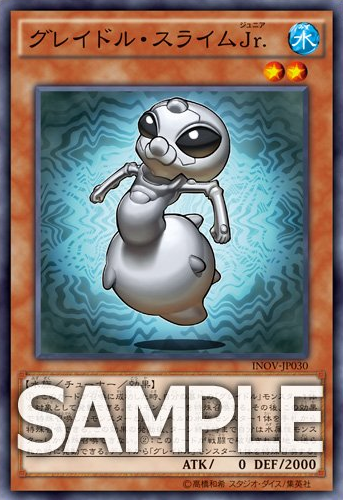