“Duelist of Destiny” (CPD1) includes “The “Prediction Princess” Series used by “Hochun Mieru” in the animated series “Yu-Gi-Oh! Arc-V” as some of the cards being turned into Offfical Card Game Cards!

First off, let’s check out this first-look-ever new card information! 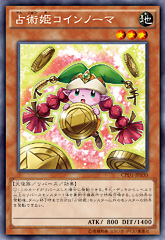 “Prediction Princess Coinorma”
[Fairy-Type ATK 800/DEF 1400]
(1) FLIP: You can Special Summon 1 Level 3 or higher Flip monster from your hand or Deck in face-down Defense Position, also you cannot activate monster effects for the rest of this turn, except “Prediction Princess” monsters’.

What is a Flip Monster?
That is any monster that has the following text written on it: 【◯◯-Type／Flip／Effect】 or 「FLIP：～(Effect contents)～」
When you Flip one of these cards face-up, their effect triggers!

Prediction Princess Tarotrei
[Fairy-Type ATK 2700/DEF 1200]
It has a powerful effect that lets you choose a Flip Monster from your hand or Graveyard and Special Summon it in face-down Defense Position! Also don’t miss its two effects you can activate during your opponent’s turn! One is an effect to flip a face-down monster to face-up Attack Position, while the other is to flip a face-up monster to face-down Defense Position! (Keep in mind you can only activate one of these two effects once per turn) With these three effects, you can attack by combining it with the activation of “Prediction Princess” effects that activates when a monster flips face-up! Will you be able to look into the future to control the Duel just like Mieru!?

Using the effects of the Ritual Monster “Prediction Princess Tarotrei”, you can bring out the trigger effects of Flip Monsters by flipping them face-up one after another!

Flip one card after another, or Set them back face-down … … What kind of prediction is the state of the field trying to tell you!?

Collectors Packs: Duelist of Destiny [On Sale May 16th, 2015]
The “Duelist of Destiny” version of the Collectors Pack has appeared! It includes the legendary monster, “Timaeus the Knight of Destiny” who struck down a Wicked God in the “Yu-Gi-Oh! Duel Monsters” animated series! It can call forth the three “Legendary Knights”! And ofcourse, more cards with “Legendary Dragon” in the names appear! Also, classic “Red-Eyes” and “Toon” cards from “Duel Monsters” are being made into real Official Card Game cards! It’s enjoyable since it includes a ton of cards that have appeared in the animated series!
[ To the Product Page ]