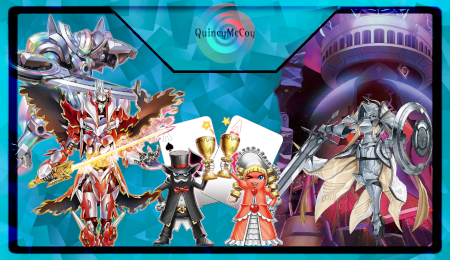 Theorems, Theology, and Luck, except… competitive?

Welcome back for today’s Profile, this time focused on taking a competitive theme in the Mathmech and adding an extra dimension to their linear playstyle with the Dogmatika. The Mathmech archetype consists of Cyberse monsters that Synchro and Xyz Summon using Level 4 monsters. Led by Geomathmech Final Sigma, this theme could OTK at the drop of a hat with an invulnerable monster, because if Final Sigma is in the Extra Monster Zone and battles an opponent’s monster, it inflicts doubled battle damage. Once you factor in that Mathmech Multiplication can double Final Sigma’s ATK as well, it becomes an extremely scary boss monster. Recently, the Mathmech received a new monster that is a one-card engine to powerful boards, and that is Mathmech Circular. Basically, Circular can send a Mathmech Sigma from your Deck to the GY to summon itself from the hand, then you can summon Sigma back using its own effect, and build up a solid turn 1 board from there, featuring a set Mathmech Superfactorial ready to Xyz Summon Primathmech Laplacian during the opponent’s turn to send a Monster they control, a Spell/Trap they control, and/or a card from their hand to the GY. Going second, Circular is a one-card avenue to a double-ATK Final Sigma. Either way, the combo branches that extend from this one card give the Mathmech theme its inherent competitive qualities.

Now I mentioned at the beginning the Dogmatika, and they’ve received some powerful support in PHHY including their first Level 12 Ritual Monster, who is predominantly featured in this deck! White Zoa of Dogmatika (YGOrg Translation) has 4000 ATK/DEF, and it makes all Dogmatika monsters you control unaffected by your opponent’s activated Fusion, Synchro, Xyz, and Link monster effects. Additionally, it carries an effect to make your opponent sent 1 card from their hand/Extra Deck to the GY for every 2 cards in their Extra Deck, or they can return all Extra Deck monsters they control back to the Extra Deck. This limits the options that your opponent has for the rest of the duel, halving their Extra Deck toolbox. To support this new boss, the deck also received a new Continuous Spell, Dogmatikatrix (YGOrg Translation), which tutors a Dogmatika Ritual Monster or Ritual Spell, then if your opponent controls a monster, you can tutor another Dogmatika card as well. Since Dogmatikalamity can Ritual Summon White Zoa using a Final Sigma from your Extra Deck, Matrix can easily serve as a one-card enabler for Zoa, especially when you realize that Matrix itself can be tutored by Dogmatika Ecclesia, the Virtuous, who in turn can be tutored by Nadir Servant.

Note: This is continuing the style of Creative Deck Profile articles, designed to showcase a build through replays and an attached summary. If you wish to see a CDP for an archetype, theme, or strategy you love, feel free to private message me on the YGOrg Discord server, the comments section of any of my YouTube videos, or just post a comment in response to this article on our Facebook page with your ideas to keep under consideration! On most YGO-related communities my username is Quincymccoy, so feel free to reach out. Current pending requested profiles include: Hunder, Gishki, Roid 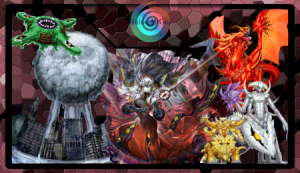