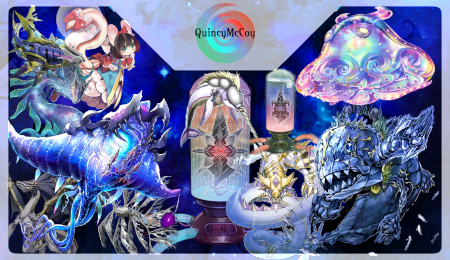 Dive into the darkest depths with Space Fishes!

The Ghoti theme is the latest in a line of TCG World Premiere themes, and this time we’re told to Go Fish… in space. The Ghoti theme is an archetype of WATER Fish monsters that focus on Synchro Summoning and banishing, offering a refreshing spin on these mechanics. Paces, Light of the Ghoti, and Shif, Fairy of the Ghoti are up first, and both are the theme’s Level 2 Tuners. Each of them may be Special Summoned during the Standby Phase of the turn after they are banished, and each carry a Quick Effect to Synchro Summon during the opponent’s Main Phase if summoned that turn. To banish these fish, Paces may banish itself from the Field to Special Summon any other Fish from the hand, while Shif banishes itself from the GY to boost a Fish monster’s ATK by 500. Speaking of Synchro Summoning, the ultimate goal is to Synchro Summon Ghoti of the Deep Beyond, a Level 10 Synchro monster that banishes all cards on the field when Synchro Summoned during the opponent’s turn, plus it Special Summons itself during the Standby Phase of the next turn after being banished. Ultimately, this theme has a lot of potential, even with only half of its support, so let me break down how I’m showcasing the archetype today.

The first build centers around typical Fish abuse of Superancient Deepsea King Coelacanth, a Level 7 Fish monster that discards a card to Special Summon as many Level 4 or lower Fish as possible from the Deck. Combine his effect with the Ghoti Tuners, White Aura Monoceros, and Gluttonous Reptolphin Greethys, and you have a recipe for tons of Synchro Summoning and high endboard potential. Paces is key here, as it gets you access to your Coelacanth straight from the hand, and you have such a high chance of opening Paces between it, Beautunaful Princess, and The Most Distant Deepest Depths.

My second build today slots these new Ghoti monsters into the Mytuant Metaphys hybrid strategy, which tries to banish as many monsters as possible with Necroface or Myutant monsters, before gaining advantage from each of them during the following Standby Phase. With the Ghoti monsters summoning themselves back easily, you unlock more disruption during the opponent’s turn through Ghoti of the Deep Beyond or through other Synchro options. Even if your Ghoti engine doesn’t work out, you can always lean back upon the gilded Wyrm wings of the Metaphys to carry you to victory.

Build One: Ghoti with Coelacanth

Spells: 12
| One for One
| Reasoning
| Upstart Goblin
| Terraforming
| Foolish Burial
| Monster Reborn
| Called by the Grave
|| Whitefish Salvage
||| The Most Distant, Deepest Depths

Note: This is continuing the style of Creative Deck Profile articles, designed to showcase a build through replays and an attached summary. If you wish to see a CDP for an archetype, theme, or strategy you love, feel free to private message me on the YGOrg Discord server, the comments section of any of my YouTube videos, or just post a comment in response to this article on our Facebook page with your ideas to keep under consideration! On most YGO-related communities my username is Quincymccoy, so feel free to reach out. Current pending requested profiles include: Dark World, Zoodiac, Runick. 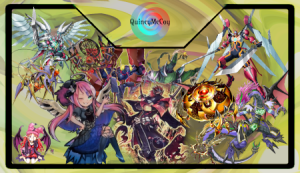