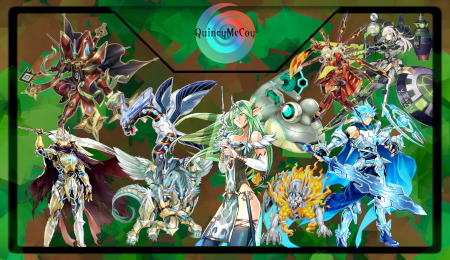 Today’s profile features two archetypes combined that were forces to be reckoned with during the heyday of the Link Era – combined with a bit of extra Cyberse flair. The Crusadia archetype embraces link monsters as a vector for special summoning from the hand, as each of the Main Deck monsters in the archetype can Special Summon themselves to an open zone a Link monster points to. Their win condition revolves around using powerful link monsters to at best OTK or or at worst attack over the strongest threats your opponent can field. Take for example Crusadia Equimax, which gains the ATK of all monsters it points to and can tribute a Crusdia it points to to negate the effects of a face-up card. Alone, that’s not too exciting, but add in Crusadia Revival to let it attack all monsters the opponent controls and Crusadia Maximus to double all battle damage it does in the turn? That’s quite the powerhouse of a Link monster.

While the Crusadia theme clearly has the aggression as its primary forte, the Sky Striker side of the deck provides a bit more control over the duel. Sky Striker Mecha – Widow Anchor gives the deck a way to negate more of your opponent’s monster effects, even letting you steal those monsters if you already have 3 or more Spells in your GY. Or simply use Sky Striker Mecha – Hornet Drones to give yourself access to a Link monster such as Sky Striker Ace – Hayate without needing the Normal Summon. This synergizes quite well with the Crusadia, but Formud Skipper gives both themes a boost into their primary monsters, as it can masquerade as a Crusadia or Sky Striker with its effect. This gives you access to either archetype’s Link 1 monsters, giving you the perfect stepping ladder into more link plays, especially when searching Parallel eXceed. My build today is rounded out by a bunch of other disruptive tech options, such as Angel Statue – Azurune, for the duels where you can’t go second to just steamroll the opponent with Crusadias! Embrace the nostalgia and the Link Summoning mantle with this hybrid strategy!

Note: This is continuing the style of Creative Deck Profile articles, designed to showcase a build through replays and an attached summary. If you wish to see a CDP for an archetype, theme, or strategy you love, feel free to private message me on the YGOrg Discord server, the comments section of any of my YouTube videos, or just post a comment in response to this article on our Facebook page with your ideas to keep under consideration! On most YGO-related communities my username is Quincymccoy, so feel free to reach out. Current pending requested profiles include: PUNK, TeleDAD. Some of my prior requests was covered by participants in CDSS6 and even more were re-covered in CDSS7, so I highly suggest checking those out and subscribing to my channel for all of my latest profiles on YouTube!