If it came down to a vote, I am positive that a majority would pick WIND as the least impactful or successful Attribute in the current metagame. WATER got their Mermail, FIRE got their Fire Fist and Fire King, EARTH got Madolche (which get Anjelly on the horizon), LIGHT got Agents and Bujin, and DARK has Dark World and of course Beezle, at least in the OCG. Besides, what deck could ever be successful with the core strategy of bouncing cards on the field back to the hand? But then I wouldn’t be writing this, so let’s introduce you to the true Lord of the Storm!

You might not have noticed the synergy inside each box of the Eighth Structure Deck, but it has become ever apparent with the release of exceptionally strong WIND support cards. But before discussing these new cards, I must take the time to highlight the two monsters that make this strategy possible: Swift Birdman Joe and Mist Valley Falcon. While most of you have heard of the concept of a ‘Falcon Trap Control’ variant, Joe has probably never crossed your mind as a potential starting point for any deck. The benefits are quite obvious: Giant Trunade is banned for a reason, but what you should really be focusing on is the ability to reset ALL of your backrow at once. With a Falcon control variant, you must take multiple turns to reset everything, if you had Fiendish Chain and/or Call of the Haunted for example. So if Joe is the godsend for a deck like this, how does a Level 6 monster fit into the equation, especially when he is restricted in terms of Tribute fodder?

While “Lord of the Storm” focused on a suite of Harpie monsters, most notably Harpie Lady 1, 2, & 3, this deck makes the decision to run with only one specific Harpie: Harpie Dancer! If you haven’t yet been introduced to this beauty, it was officially released in Legendary Collection 4, but the main use for it has always been triggering Divine Wind of Mist Valley on its own because it bounces a WIND monster you control (including itself) to grant you the option to Normal Summon an additional WIND monster right away. Throw up Divine Wind, and your Dancer + a Level 4 WIND from the deck leads to an easy Lightning Chidori, easily stated as one of the best Rank 4 Xyz Monsters in the game. Dancer serves a slightly different purpose as well, and that is to recycle our dear Birdman Joe! You see, having one Giant Trunade is nice, but having one every turn is a lot nicer. 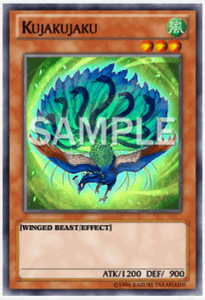 Our last piece of the puzzle is the supporting lineup of WIND monsters. I choose to go with Kujakujaku and Silpheed, two powerful WIND monsters for either Searching or Special Summon potential respectively. The peacock is a great option when you simply need to blow something up with Icarus Attack, turning a 2 for 2 into a 3 for 2 advantage swing, but it truly shines by making your Birdman Joe Tribute Summon even in advantage.

Before we swing towards dissecting how the deck works from this general approach, I want to draw attention to the one main similarity between Kujakujaku, Harpie Dancer, Mist Valley Falcon, and Swift Birdman Joe: they are all Winged Beasts that love to be Special Summoned straight from the deck with Ninjitsu Art of Transformation. And as you know, Ninjas just love to leave Continuous Traps lying around for reuse.

As you can see by the jam-packed core lineup, there is a ton of power in this deck. Just the fact that Hanzo is a +1 upon summoning lets you begin the advantage train chugging along from turn 1 onwards. Another big plus is if you open Hanzo and Icarus, you can Art of Transformation into Kujaku, use Icarus to destroy 2 cards, then search out any WIND you need for your next turn, specifically Falcon. Then when you attack, simply bounce back the Transformation for more shenanigans in the future if the opponent attempts to Effect Veiler a future Hanzo.

Another big decision when building this deck is Big Bang Shot or Safe Zone. Both serve the same purpose with different utility, monster removal when bouncing back backrow with Falcon or Joe. The piercing of Big Bang allows for extreme damage against Tokens or a passive opponent, whereas Safe Zone allows you to defend pivotal monsters in a pinch. Also, don’t count out the ability to activate Big Bang more than once in a turn. Activate, Joe back, banish, activate, Falcon bouncing back to banish before declaring attack! 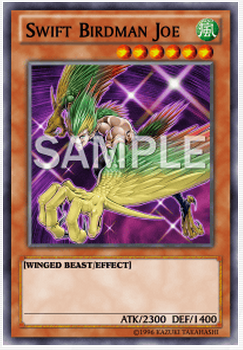 Despite being a generically themed ‘WIND’ deck, it is not an “everything but the kitchen sink” type of deck, but here’s a few alternate options for you to consider!

Garuda the Wind Spirit: This monster is basically the equivalent to Silpheed except for a few minute details. The main difference is in their types: Garuda is a Winged Beast so it pairs better with Icarus Attack, but Silpheed has more ATK and has a better secondary effect. The role played by either of these two is close to the same, so it is perfectly fine to run whichever you feel is better.

Genex Ally Birdman: This is an AWESOME tuner when running Divine Wind, but quite frankly, you’re almost never going to get the two together. With both Divine and Genex Limited by the F&L List, there is then the issue that running a slew of Synchros in the extra deck over a wider variety of Xyz’s will help you more in the long run for the off chance of pulling of an amazing 2-card combo that also happens to require another WIND monster.

Tempest, Dragon Ruler of Storms: This is an additional beater that seems like it would fit amazingly into a deck like this; however, you really are never going to accumulate enough WINDs in your Graveyard to make much use of his recurring Special Summoning. Also, you really do need monsters to benefit from Powerful Rebirth and Call of the Haunted.

Clear World: I know this is a strange pick, but technically the WIND restriction is extremely light in comparison to the rest, especially since you shouldn’t be running that many Spell cards. Its effect can also provide a heavy amount of frustration to decks such as Bujin, where you can always tell if they have Crane, or decks that heavily use Xyz’s because they have a higher tendency to leave more attributes face-up. Also, you can always bounce this back to hand if you need to with Joe or Falcon.

Vanity’s Emptiness: Great card for Falcon control since it can be returned at a moment’s notice. It is not AS good in here, as the other main way of bouncing backrow is Joe, which requires a Tribute, which would destroy Emptiness before it could be returned. So it is not quite as amazing here, but it can definitely put in some work.

Kaiser Colosseum: We’re just going to continue on the control train in terms of tech options. Kaiser is great at preventing swarm decks from getting off the ground; however, there is literally no benefit to continue bouncing it.

Magic Planter: If you want to be able to trade a spent continuous trap for 2 draws, be my guest and run this amazing draw card. However, I would much rather prefer the ability to simply reuse that trap card later, even if it is a Ninjitsu Art of Transformation.

Reborn Tengu: While its checked power as Semi-Limited keeps it from being a mandatory pick, it is still an option because it is a great card to start off the duel. Also, the synergy with Harpie’s Dancer and Divine Wind is just…. extraordinary. Xyz spamming is never easier then when Tengu’s in the fra.

Completed Example Deck:
For those of you who have completed reading this guide, yahoo! The link in this article is a screenshot of my personal WIND Ninja build. It may not be the best build for them, but it can serve as a baseline for your deck construction in the future. Just like a Ninja, the example deck screenshot is hiding in plain sight as the image of the Structure Deck.