A Strong Rank 2 Xyz Monster That Can Blow Away Opponents It Battles Has Appeared!!
“The Secret of Evolution” (SECE), which comes out November 15th, 2014, has a Rank 2 Xyz Monster that can’t be destroyed by battle as long as it has Xyz Material and can return opponent monsters it battles back to the hand!

Let’s check out the effect here! 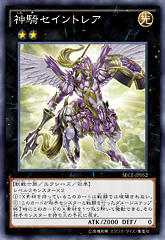 Take Advantage Of Its Ability To Not Be Destroyed By Battle To Return Opponent Monsters To The Hand By Attacking!
You can attack opponent monsters without it being destroyed due to its ① effect! If you have monsters your opponent controls with more ATK than it, you can use its ② effect to return opponent monsters back to the hand by battling! Also, since its ② effect doesn’t target, it can be used

In any case, think about how this monster can be used!