Dragunities have gotten even stronger! A powerful Equip Spell Card has appeared that can serve as the starting point for tactics that will let you Synchro Summon one monster after another!

The Secret of Evolution (SECE), which comes out November 15th, includes a new Dragunity card called “Dragunity Spear of Destiny”! It strengthens the equipped monster and provides countermeasures against Trap Cards, but it has another effect you should pay attention to! It’s a huge support card for “Dragunity Phalanx“, who is useful as a starting point for letting Dragunities Synchro Summon one monster after another! 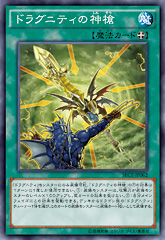 This new card expands the possibilities of “Dragunities”!
In addition to the powerful combos that lets you continuously Synchro Summon Level 6 and 8 Synchro monsters using Dragunity Phalanx, it’s also great with high level monsters like the Level 8 “Dragunity Arma Leyvaten” whose ATK becomes 3400, or using Dragunity Brandistock, who can allow the equipped monster to attack twice each Battle Phase… the combos the Deck has explode in scale with this card!

Consider what new combos you can pull off with this card!