The February Issue of V Jump Contains a Powerful Card That Works One of the “Duelist Sets”! 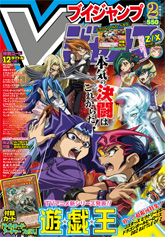 The Jumbo February Issue of “V Jump” on sale December 21st, 2013 includes “Felice, Lightsworn Archer” a powerful card that works incredibly well with “Duelist Set Ver. Lightlord Judgment”! Both Duelist Sets were released on November 23rd, 2013, so be sure to check out ““Geargia” and “Lightsworn” Power-Up! Here Comes Cards from the Duelist Sets and Promos from V Jump!“. According to these, V Jump for 2 Months would have powerful cards included, each capable of powering up their respective “Duelist Set”!

Felice, Lightsworn Archer
(Tuner LIGHT Beast-Warrior-Type ATK 1100/DEF 2000)
A Level 4 Tuner that cannot be Normal Summoned, only Special Summoned and it can only be Special Summoned by a card effect. When this card is sent from the Deck to the Graveyard by the effect of an Effect Monster, it can use its potent ability to Special Summon itself from the Graveyard! Besides being able to be used for a Rank 4 Xyz Summon, it can easily be used to Synchro Summon a variety of different Levels! And if you Tribute it you can use its super-strong skill to target an opponent’s monster on the field, destroy that target, and then send the top 3 cards of your Deck to the Graveyard!

★Combo Example: By using 2 Level 4 monsters together, you can Xyz Summon a Rank 4 monster or Synchro Summon a Level 8 monster!

By setting up the Level 4 Tuner “Felice” with a Level 4 Monster, you can use the two of them to either Synchro Summon a powerful Level 8 Syunchro Monster or Xyz Summon a mighty Rank 4 Xyz Monster! Make your move by using “Lyla, Lightsworn Sorceress” (henceforth referred to as Lyla) to destroy an opponent’s Spell or Trap! After using Lyla’s explosive effect, use her and Felice to bring out a mind blowing monster from the Extra Deck OR send more cards from the Deck to the Graveyard to set up further combos!

By using the effect of “Raiden, Lightsworn Assailant” (henceforth referred to as Raiden) during the Main Phase, you can send cards from your Deck to the Graveyard, you can Special Summon Felic and “Wulf, Lightsworn Beast” (henceforth referred to as Wulf) from the Graveyard using their effects! By getting Level 4 Tuners like Raiden and Felice on the field, you can only use their effects, but you can use them for a Rank 4 Xyz Summon!

… And speaking of new cards, the Organization will be hosting a tournament with cards from “Legacy of the Valiant” and “Number 47: Nightmare Shark” legal to use!