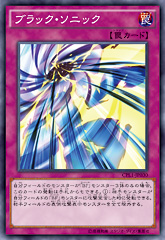 As well, during the second part, let’s introduce a card reprinted in “Structure Deck -HERO’s STRIKE-”!

“Black Sonic” is in “Collector’s Pack: Duelist of Legend”!

Black Sonic
(Normal Trap Card)
When your opponent’s monster declares an attack against a “Blackwing” monster you control, you can activate this card, using its super powerful effect to banish all of your opponent’s face-up Attack Position monsters! Also, if you have exactly 3 “Blackwing” monsters on your side of the field, no more, no less, you can activate this card from your hand!!! Since you don’t have to set it on the field, you can throw your opponent one heckuva curve ball! By the way, since this effect banishes without destroying, it’s quite useful against monsters that can’t be destroy by effects!