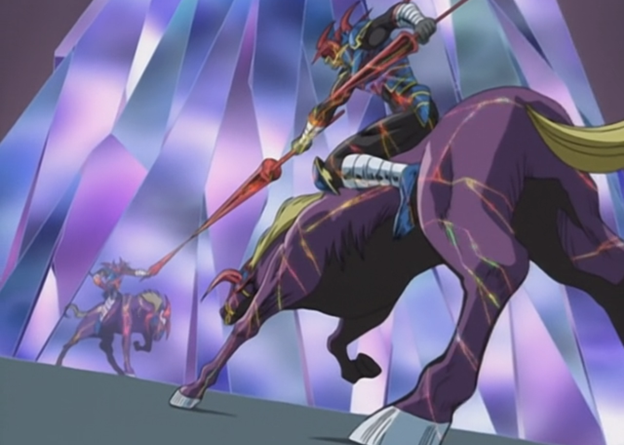 I finally rest, and watch the sun rise on a grateful universe.

This is the long awaited, new and improved ATK/DEF modifier guide. Things always become less fun when math and numbers are involved, and even I have trouble with ATK/DEF modifiers. This guide will cover the many different ways of modifying a monster’s ATK/DEF and how they interact with one another to better help players understand how their cards work. For a set of rules as complex as these are, their sources are not always easily accessible, especially outside of Japan. Since these effects are fairly well-represented in competitive play, it is an important part of the game to know.

An ATK/DEF modifier is any change to a monster’s printed ATK/DEF. When describing a modifier effect and determining how it works, there are 3 main questions to ask.

As you can see, there are 2 opposing answers to each question. So with all combinations considered, that means any given modifier can fall under one of the following 8 (theoretical) different categories. But really, there are 6:

Now that we’ve seen what kinds of modifiers there are, we need to know how each of them interact with one another. What happens when you apply one type of modifier to a monster, and then another?

Konami’s Perfect Rulebook goes into considerable detail. We have our translation of the 2017 version here, and the rules involving ATK/DEF modifications start on page 156. While the 2017 version isn’t the most recent one, the updated rules in the newer versions don’t affect how modifiers work. I’ll go through the different types of modifiers listed above, and how they interact with other modifiers (with examples), then cover some of the special cases.

Each section that follows will cover the different types of ATK/DEF modifiers, as well as special exceptions. Relevant sources from the OCG Card Database are linked at the bottom of each section. Not all examples have Database rulings, but the information comes from other reliable sources, including the Perfect Rulebook. If you’ve been playing Yu-Gi-Oh! Duel Links or Yu-Gi-Oh! Master Duel, you can also expect cards to work as described in this guide. Some information has also been corroborated with Konami’s OCG Customer Service Office.

I. Applying any effect that increases or decreases ATK/DEF.

For the most part, regardless of what kind of effect was previously applied to a monster, increases/decreases are simply added to the existing value. This is true for both activated effects and non-activated effects.

II. Applying an activated effect that sets ATK/DEF to a determined value.

These are activated effects that “halve”, “double”, or “switch” the current ATK/DEF of a monster, or make it “become” a specific value. Despite the variety of words used, they really all mean the same thing. Mechanically, a card like Limiter Removal does not actually double a monster’s ATK, but rather it sets its ATK to a value that is twice its previous ATK. If the effect of Limiter Removal is applied to Cannon Soldier’s 1400 ATK for example, it is making its ATK become 2800.

When these effects are applied, they overwrite any previous modifiers, even if they use those modifiers as a reference point to determine the new value (such as halving or doubling a monster’s current ATK), so those previous changes to the current ATK/DEF are not reapplied. These effects essentially lock in or freeze the ATK/DEF at the newly-determined value.

If the new effect stops applying after a certain duration, a continuously-applied effect’s modifiers are reapplied. However, changes that were made by previous activated effects to the current ATK/DEF are never reapplied, as they have been wiped forever.

Example 2: Apollousa, Bow of the Goddess has an original ATK of 3200 from its own effect, and has used its effect that makes it lose 800 ATK 3 times while on the field (losing a total of 2400 ATK), so its current ATK is 800. If Apollousa, Bow of the Goddess is equipped with Moon Mirror Shield and battles a Cyber Dragon, the effect of Moon Mirror Shield activates and sets Apollousa’s ATK to 2200. After damage calculation is over, its ATK returns to its original value of 3200. The 2400 ATK previously lost by its effect is NOT reapplied.

III. Applying a non-activated effect that sets ATK/DEF to a determined value.

These are continuously-applied effects that change ATK/DEF to a specific value. Once these effects are applied, any previous non-activated increases/decreases are reapplied to the ATK/DEF. There are exceptions to this rule, and those are noted in Section VI as special non-activated effects that are always applied last.

When these effects are applied, any increases/decreases previously applied by an activated effect, or any changes to a monster’s current ATK/DEF set by an activated effect, will not reapply. However, the old modifiers are only masked and don’t disappear entirely. If the new effect stops applying, the first effect’s modifier will magically reappear.

When two non-activated effects are applied that each set ATK/DEF to a determined value, whichever effect was applied most recently will take effect. If that new effect then stops applying, the first effect will be reapplied.

Example 2: Copycat activates its effect targeting Dark Magician, and its current ATK/DEF become 2500/2100. If the effect of Shield & Sword is applied, the ATK/DEF of Copycat each become 0. When the turn ends and the effect of Shield & Sword stops applying, the ATK/DEF of Copycat switch again, but its effect is never reapplied. Its ATK/DEF will be 0.

If these effects are applied while a non-activated effect is setting ATK/DEF to a determined value, that previous effect is reapplied once the original ATK/DEF is changed.

As with the activated effects that change original ATK/DEF, previous increases or decreases are reapplied.

Example: An Accesscode Talker gained 3000 ATK from its own effect. If it is equipped with Unstable Evolution, its original ATK becomes 1000 or 2400, but the boost from its own effect is reapplied, so its current ATK will be 4000 or 5400.

Previous changes that result from an activated effect setting a monster’s current ATK/DEF will remain active, so that the current ATK/DEF of the monster does not change even though the original ATK/DEF may change “in the background”, so to speak.

Example 1: Drill Warrior halves its ATK with its own effect. If Drill Warrior is equipped with Solitary Sword of Poison and attacks an opponent’s monster, its current ATK remains 1200, even though its original ATK becomes 4800.

Example 2: The effect of Forbidden Droplet is applied to Fire Hand, halving its ATK to 800. If Ojama Country is activated, Fire Hand’s original ATK and DEF switch, but its current ATK remains 800. Its original (and current) DEF becomes 1600.

Example: Inzektor Dragonfly is equipped with Darkworld Shackles, so its ATK/DEF are each 100. If it is then equipped with Inzektor Giga-Mantis, its original ATK becomes 2400, but its current ATK (and DEF) remain 100.

As mentioned in Section III, certain effects that set a monster’s current ATK/DEF continuously are always reapplied last as new modifiers are introduced, breaking some of the rules established above. Even though they can be described in the same way – non-activated effects that set ATK/DEF to a determined value – it is not always clear why they work differently.

Firstly, I’ll talk about the effects that halve, double, or switch a monster’s current ATK/DEF continuously, since these have no counterparts in Section III, making them easier to categorize. As I also mentioned above (in Section II), activated effects such as Limiter Removal don’t truly double a monster’s ATK; they set a monster’s ATK to a value that is twice its previous ATK, and “freeze” it. The same is true with cards like Inverse Universe, which switch a monster’s current ATK/DEF. The special effects discussed in this section actually do double, halve, or switch ATK/DEF, and any new modifiers are applied to the previous level of modification, but the special effect is then reapplied to the new total.

Things get more complicated with activated effects that set ATK/DEF to a determined value applied while these special effects are applying. It was previously mentioned that when an effect like Limiter Removal or Blackwing – Gale the Whirlwind resolves, any previous non-activated modification cannot be reapplied. However, cards like Mirror Wall and The Wicked Dreadroot will reapply.

Lastly, we have the effects that continuously set a monster’s ATK/DEF to a specific value rather than halve, double, or switch it. As with the cards above, these are always applied last and supersede virtually all other effects that would modify ATK/DEF. While their effects are applying, they (or the monsters their effects are applied to) are effectively immune to any ATK/DEF modifications. One thing to keep in mind again however, is that because they apply continuously, they simply mask the previously-applied modifiers rather than remove them entirely. If the new effect stops applying, the old effects are reapplied.

A monster’s effect that sets its own current or original ATK/DEF upon being Summoned is generally considered a Continuous Effect, because it does not activate. However, these effects behave more like activated effects with respect to the interaction rules covered above. They are only applied once when the Summon is successful, and are not continuously-applying thereafter. Naturia Beetle is similar as well, although its effect is not applied upon being Summoned.

In the above examples, although the first effect of Apollousa, Bow of the Goddess and the effect of Naturia Beetle are Continuous Effects, they behave more like previously-applied activated effects that change original ATK. (They are closer to something like Lost Wind than Solitary Sword of Poison.)

Ruling: Apollousa, Bow of the Goddess vs Shrink

There is a lot here to take in, and understandably this isn’t an easy topic for people to grasp in one reading. The most important thing when playing your cards is to identify which type they are based on the examples above. I tried to include some of the popular favorites, like Forbidden Droplet and Apollousa, as well as the better-known trivia cards, since those will be the cards that generate the most questions. (Fortunately, the ones that are more complex are also rarely played.)

Thank you for reading. You can always reach out with questions through our Discord server or Facebook page.