The new series “Amorphage” who appear in “Shining Victories” which goes on sale January 9th, 2016… … are EARTH Dragon-Type monsters with hideous forms, who possess powerful effects to limit both players’ moves!

The Ritual Monster “Amorphactor Psycho, the Vain Dracoverlord” can be Ritual Summoned by an unprecidented method: With the very Field Spell that powers up “Amorphage”! Not only does it have a sinister form, but it has powerful effects that dominate both the Field and the Duel! 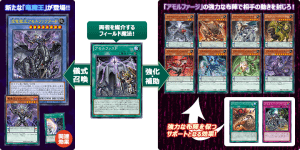 Amorphactor Psycho, the Vain Dracoslayer
[Dragon-Type ATK 2950/DEF 2500]
You can Ritual Summon this card with “Amorphous Persona”.
(1) After this card is Ritual Summoned, skip your opponent’s next Main Phase 1.
(2) Negate the effects of face-up Fusion, Synchro, and Xyz Monsters on the field.
(3) If this card is sent from the field to the Graveyard: You can add 1 “Dracoverlord” monster from your Deck to your hand, except “Amorphactor Psycho, the Vain Dracoverlord”.
[⇒ Its (1) effect is brutal and chaos-undcuing! Skipping Main Phase 1 forces your opponent to either enter the Battle Phase or go straight to the End Phase. Its (2) effect is also quite strong, as it controls the field and cuts off your opponent’s ability to counterattack!]

Amorphous Persona
[Field Spell Card]
(1) All “Amorphage” monsters on the field gain 300 ATK and DEF.
(2) Up to twice per turn, each time an “Amorphage” monster(s) you control is Tributed, immediately draw 1 card.
(3) You can banish this card from your Graveyard; Tribute Pendulum Monsters from your hand or field whose total Levels equal exactly 8, then Ritual Summon 1 “Amorphactor Psycho, the Vain Dracoverlord” from your hand.
[⇒ Not only does it draw cards and power-up “Amorphage”, it also has an effect to Ritual Summon one of the new “Dracoverlord”s! ]

Introducing the “Amorphage” Monsters!
The “Amorphage” are a brand new series who fight by using their Monster and Pendulum Effects to limit both players’ actions! The limits apply to both players, but many of their effects don’t apply to “Amorphage” monsters, meaning you can make your moves without much impact on you!

Their Monster Effects Seal Special Summoning From The Extra Deck!

Their Pendulum Effects Restrict Your Opponent’s Actions, And Allow You To Deploy “Amorphage”

There’s a Continuous Spell Card and a Continuous Trap Card, both of which have persistent effects, that strongly maintain the “Amorphage’s” powerful battle formation!

Amorphage Infection
[Continuous Spell Card]
You can only use the (2) effect of “Amorphage Infection” once per turn.
(1) All “Amorphage” monsters on the field gain 100 ATK and DEF for each “Amorphage” card on the field.
(2) If a monster(s) in your hand or your side of the field is Tributed, or destroyed by battle or card effect: You can add 1 “Amorphage” card from your Deck to your hand.
[⇒ It’s okay to add Spell/Trap Cards to your hand using its (2) effect! It’s useful to deal with things based on the situation!]

What kind of cards will you combine for your Deck?

Shining Victories
[On January 9th, 2016]
It includes many of the Lancer’s cards that were used in the “Yu-Gi-Oh! ARC-V” animated series! It also includes many cards used by Yugo and Serena! Also worth noting is the new “Amorphage” seires, who fight by keeping “Amorphage” cards on the field to bind the opponent’s movements! Also,there are plenty of new “Blue-Eyes” related cards included, in anticipation for the movie! Decide the game using combos with the overwhelming pwer
[ To The Product Page ]