YCS Turin is a lot cooler than you first thought!

Dating all the way back to 2004, the powers that run this game have been running a giant circuit of tournaments, initially called “Shonen Jump Championships”. These tournaments would move from city to city across America, and later other countries, even other continents, gathering hundreds and even thousands of players in one spot to play the game they love.

After 75 events passed, the name was changed to Yu-Gi-Oh! Championship Series, known most commonly as “YCS”, and today I’m happy to confirm that the 125th YCS will be held in Turin, Italy. 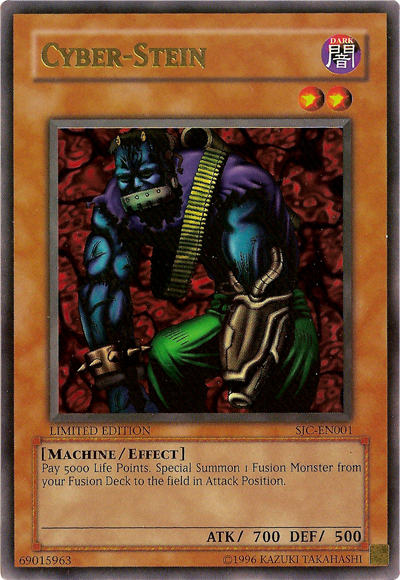 The first SJC event was held in Anaheim, California on December 4, 2004. Players gathered at GenCon to for the first time, play in what would eventually be world record setting tournament conditions. Their prize? An Ultra Rare copy of the card “Cyber Stein” that would go on to sell for $5,000. The winner was John Umali, and his Deck List can be found here.

Two months later, the SJC circuit came busting out of the gates in full force, with three events in February alone, from Las Vegas, to Columbus, to Orlando all in the span of 3 weeks. After 9nineevents passed, going through Los Angeles, Houston, New Jersey and Charlotte, the final location you could get a Cyber Stein was the SJC in Seattle. This was won by Osman Ortiz. By this point, Not only had Ryan Hayakawa won two SJCs, but he had won them in a row, in Houston, and then New Jersey. 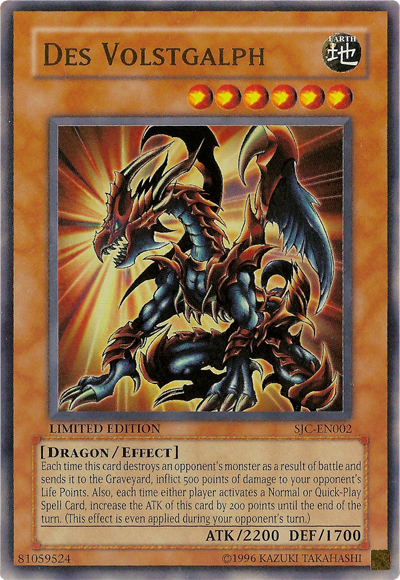 The next SJCs would have a different card, known as “Des Volsgalph“. These were given out from August 2005 through April 2006. During this period, SJCs were held in Indianapolis, Boston, Atlanta, Chicago, Los Angeles, San Francisco, Durham, Orlando, Long Beach, and Baltimore.

During this period also marks the beginning of the Pharaoh’s Tour in Europe, which emulated the SJCs. These PT1 Prize Cards would end up becoming some of the rarest in the world, with some being even one of a kind. 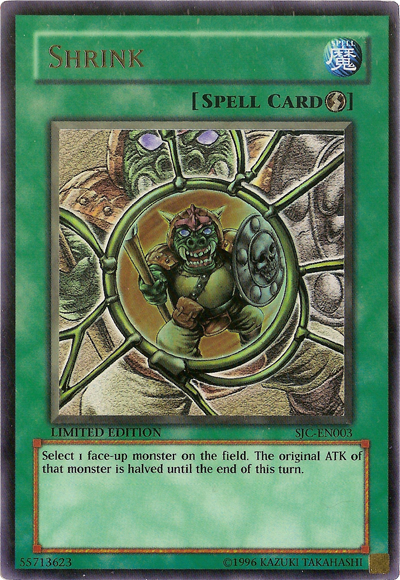 The next SJC and PT Prize card would be “Shrink“, the biggest rulings nightmare to ever hit the game. These events took place between May and December of 2006, bringing the circuit through Columbus, Chicago, Atlanta, Denver, Arlington, Philadelphia, Indianapolis, Hamilton, Boston, Austin, Seattle, Anaheim, and San Jose. San Jose was won by David Rodriguez piloting a deck based on a One Turn Kill combo using the first SJC promo – Cyber Stein himself. The Side event of SJC Seattle would be the first premiere event won by Adam Corn.

Then things would turn ugly for a while. 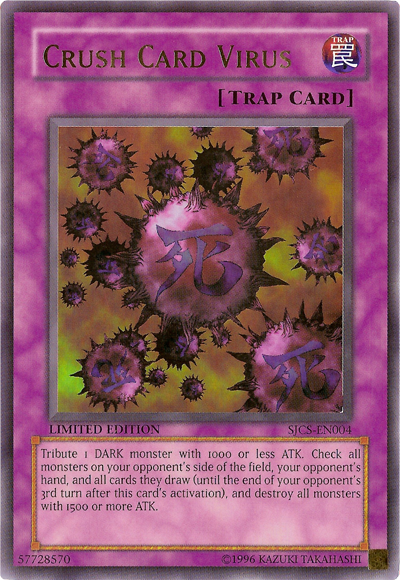 Despite as many as 40 being given out, our fourth promo “Crush Card Virus” would not be given out at Upper Deck day, making the most powerful and popular prize card, also the rarest and to this day holds a price tag well over $2,000 USD. This card would prove to be so good, that it was helping the people who won them, win other events! They swore right then and there to never release a prize card this powerful again. 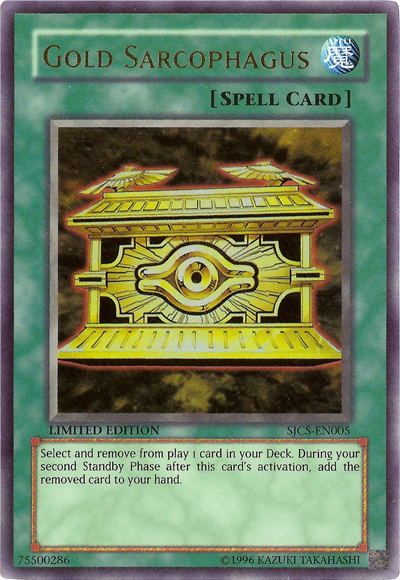 Our 5th Prize card is “Gold Sarcophagus“, first won by a burn deck at SJC Indianapolis (the side event of which was also won by Adam Corn, his second win), would be the prize for the events between August 2007 and February 2008.

These were again given out at Upper Deck Day. the events would take place in Indianapolis, Washington, Chicago, Durham, San Mateo, Orlando, and Houston. 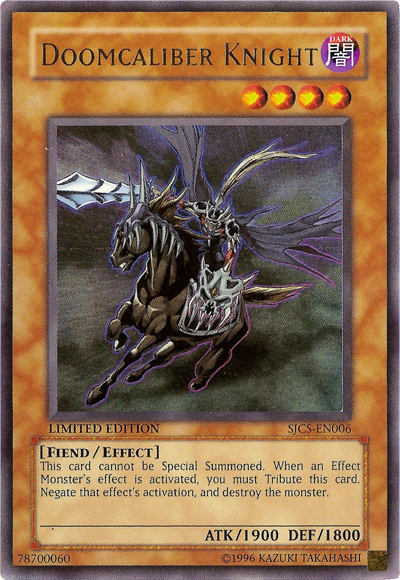 The second to the last SJC Prize card was “Doomcaliber Knight“, one that would be reprinted in a very short time, enraging many fans. Dark Armed Dragon and Gladiator Beasts practically dominated this era, as archetypes began to become the norm, and between March of 2008 and January 2009, Adam Corn wins his first YCS, Paul Levitin makes Gladiator Beasts world famous, where they win 6 SJCs in a row, only to have the next 8 in a row all won by TeleDAD. Dragon Rulers don’t seem so bad now, do they? Jerry Wang wins three times, Lazero Bellido wins twice, and Steven Harris wins twice, once with each deck.

Three months later, the SJC Circuit would come back, by going where it started, in Anaheim, California, with a new Prize Card – “Dark End Dragon“- in what is regarded as the most skillful era of the games history. coming fresh off of the fabled ‘TeleDad’ format, players were more focused on skill than ever before, techs and deck ideas were coming out left and right, and Synchros were taking the world by storm. Dark End Dragon would come out in a Shonen Jump(TM) magazine, making the prize card worthless, and that still didn’t stop people from coming out in the thousands, all fighting to be the best. A win here, means you are very, very good at this game. 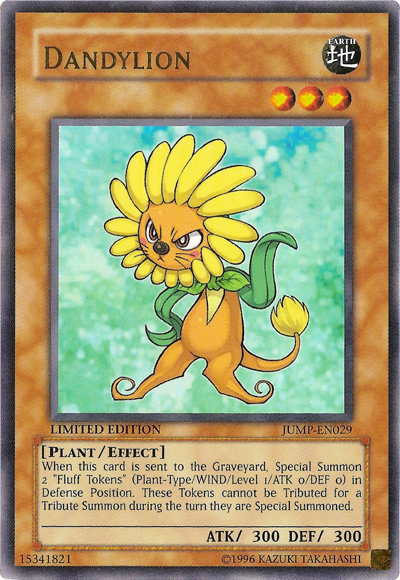 Anaheim is won by Jeff Jones, his first event win, and several months later in Indianapolis, Fili Luna wins with Blackwings. This makes four wins for Fili Luna, in four different formats, for four different prize cards. A month later, SJC Orlando is also won with Blackwings by Rodrigo Togores, and the side event is won by soon to be legend Billy Brake. Another month passes and Chris Bowling with Lightsworns wins SJC Austin, with its side event being won by Adam Corn. A strong showing by Sorosh Saberian, and a win by Vincent Ralambomiadana with Lightsworns was a month later in Colombus, and in January, Steven Silverman wins with Lightsworns in Los Angeles. Most of these players still top and win events to this day. One last SJC before the big finale takes place in Nashville, and is won by a Zombie deck piloted by a Japanese player named Satoshi Kato.

The SJC Circuit comes to a phenomenal conclusion, with the seventy-fifth SJC taking place in Edison, New Jersey. Jeff Jones may have won with his Quickdraw Dandywarrior Deck, but the diversity of the top cut, and quality of it’s players are unmatched to this day. The world record for tournament attendance at this time (and for a few years after) was 2,227 people, and this event had 2,712 entrants. The world record is not officially broken by this event.

This was fifty events ago, and since then, YCS’s have had more prize cards, more formats, and even a landmark one hundredth YCS in long beach California that had 4,364 people enter it, devastating the previous world record in it’s pre-registrations alone. At every landmark event, there has been a landmark playmat, and that is the case with with Turin.

Celebrating the Showcase, 125 YCSs, and the first landmark event to take place in Europe, the boys have held nothing back and maximized style.

“With less than a month to go to the event, many Duelists are already making travel plans and building their Decks. This event is sure to be one that will go down in history and we hope to see you there!”

There is plenty more about this YCS that will be revealed over the next little while, such as side events, and other very special news to celebrate this landmark. Be sure to check back often and check the yugioh-card.com/uk/ homepage often for news!