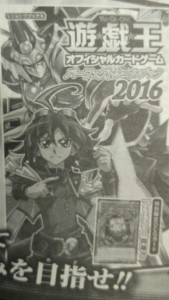 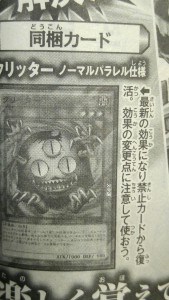 Sangan is the Promo for the 2016 Perfect Rule Book

Sangan
Level 3 DARK Fiend-Type Effect Monster
ATK 1000
DEF 600
The effect of “Sangan” can only be used once per turn. (1) When this card is sent from the field to the Graveyard: Add 1 monster with 1500 or less ATK from your Deck to your hand. {If you add a monster to your hand with this effect, you cannot activate the effects of monsters with the same name during that turn.} 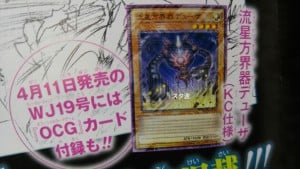 The Meteor Houkai Device Duja is a Level 4 LIGHT Monster with 1600 ATK and DEF.
It’s a Kaiba Corp Foil Rare
It comes with the April 11th, 2016 issue of Weekly Shonen Jump
All effects and details are unknown! 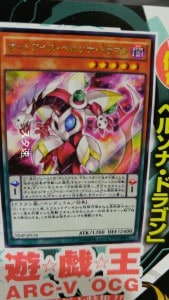 Odd-Eyes Persona Dragon
Level 5 DARK Dragon-Type Pendulum Effect Monster
ATK 1200
DEF 2400
Pendulum Scale: 1
Pendulum Effect:
(1) If an opponent’s effect is activated that targets 1 “Odd-Eyes” Pendulum Monster on your field, during your End Phase: Special Summon this card from your Pendulum Zone, then choose up to 1 face-up “Odd-Eyes” Pendulum Monster in your Extra Deck, place it in your Pendulum Zone.
Monster Effect:
(1) Once per turn, during either player’s turn: You can target 1 face-up monster that was Special Summoned from the Extra Deck; until the end of the turn that monster’s effects are negated. 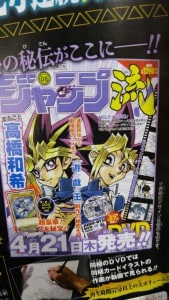 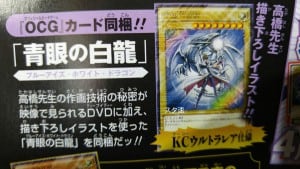 Odd-Eyes Phantom Dragon
Level 7 DARK Dragon-Type Pendulum Effect Monster
ATK 2500
DEF 2000
Pendulum Scale: 4
Pendulum Effect:
(1) Once per turn, if there is an “Odd-Eyes” card in your other Pendulum Zone, when your face-up monster battles an opponent’s monster, during attack declaration: Your monster gains 1200 ATK until the end of the Battle Phase.
Monster Effect:
The monster effect of “Odd-Eyes Phantom Dragon” can only be used once per turn.
(1) When this Pendulum Summoned card you control inflicts battle damage to your opponent due to attack: You can inflict 1200 damage to your opponent for each “Odd-Eyes” card in your Pendulum Zones.