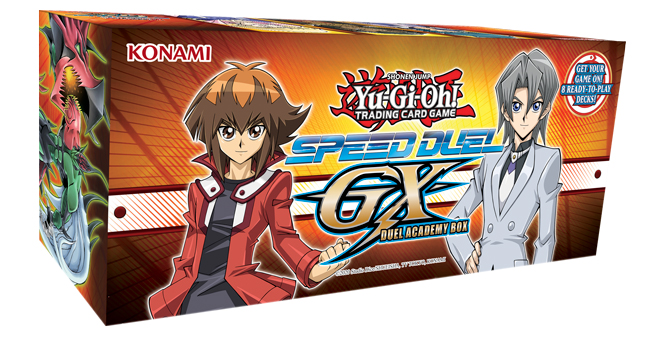 From a News Brief on the British Yu-Gi-Oh! TCG website: 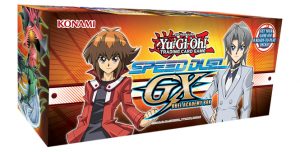 The next generation of Yu-Gi-Oh! Speed Duel arrives on March 18th* with the launch of Speed Duel GX: Duel Academy Box. Loaded with 8 unique Decks that are ready to play right out of the box, the Speed Duel GX: Duel Academy Box is designed for beginners to Speed Duel as well as existing fans of Speed Duel. The box includes several “Speed Duel Essential” cards like Book of Moon, Sphere Kuriboh, and Floodgate Trap Hole – perfect for Duelists who are trying Speed Duel out for the first time or for those who are re-visiting! As the name implies, the Speed Duel GX: Duel Academy Box features characters from the Yu-Gi-Oh! GX series. Skill cards of Jaden Yuki, Aster Phoenix, Chazz Princeton, Alexis Rhodes and others are included along with their signature monster and Deck strategies. Save the city with Jaden’s Elemental HERO monsters! Defend the night with Aster Phoenix’s Destiny HERO monsters. Steal the spotlight with Chazz Princeton’s Ojama monsters and much more! 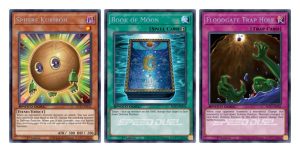 The Speed Duel GX: Duel Academy Box can be played several ways. While intended to be played right out of the box, special rules for both sealed draft and sealed cube formats are included. Draft with friends or customize and build your own draft cube – the Speed Duel GX: Duel Academy Box is a great starting point for customizing sealed play for groups of friends to play together. Several Decks can be made by combining multiple copies of the Duel Academy Box together, which provides a great opportunity for Duelists to bring their friends and family into the game!

Each box includes 200 game cards and 20 Skill cards. Also included is an 8-card Secret Rare promo pack from a selection of 24 cards, including several GX era classics like Elemental HERO Flame Wingman, Destiny HERO Dasher, and Ojama King. The Duel Academy Box packaging also doubles as a storage box, featuring Jaden, Aster, and all the characters featured in the set, providing the perfect storage for a growing collection! 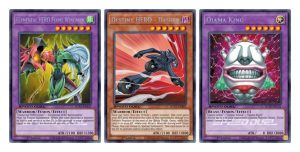 Following the release of Speed Duel GX: Duel Academy Box is Speed Duel Tournament Pack 3, which will be available to OTS starting March 25th*. Designed with newcomers in mind, Speed Duel Tournament Pack 3 is loaded with cards some newer Speed Duelists may not have access to. Several cards from the Speed Duel Starter Decks: Match of the Millennium and Speed Duel Starter Decks: Twisted Nightmare are available again as Super and Ultra Rare cards. The pack also features 20 Common versions of powerful Speed Duel cards like Parasite Paranoid, Santa Claws, Zombina and more to collect. Also, in the set are updated card text versions of Skill Cards like Cocoon of Ultra Evolution and others.

Don’t forget, to use a card in Speed Duel it must have the Speed Duel symbol on the card. Cards without the symbol are not legal for Speed Duel. However, Speed Duel cards can be used in the Yu-Gi-Oh! TCG (with the exception of Skill Cards).