Check out this new style of effect introduced in Legacy of the Valiant!

Introducing to the TCG: Stand-Off.

Stand-Off is a card that targets 1 face-up Attack Position Effect Monster on each side of the field, and after negating both effects, renders both monsters in a perpetual state of ‘uselessness’. Neither monster can be destroyed by battle, attack, manually change battle position, nor be affected by any other cards or effects. This means until either monster leaves the field via Xyz, Synchro, or Tribute Summon (or even Fusion Summon, but only of the Contact Fusion variety), neither player can be attacked directly, barring card effects, and both only have four Monster Card Zones to use.

Naturally the easiest escape for them is to Synchro or Xyz, so it should go without saying that you would want to choose an Xyz Monster. Take the newly released Number 101: Silent Honor Ark for example. After baiting this card out, Summon a monster with as much ATK as possible, such as Malefic Cyber End Dragon, and then activate Stand-Off. From this point on, there is very little your opponent can do to harm you, barring burn cards and cards like Volcanic Queen. Of course, your monster can always be attacked for you to take battle damage, but this can still be used for the most powerful form of stalling the game has ever introduced.

An example of a lock
DNA Surgery, Stand-Off, Chaos Sorcerer, Secret Village of the Spellcasters.
This is a quick example we came up with pretty quickly. Special Summon your Sorcerer and use Surgery to call anything other than Spellcaster-Type. Afterwards, use Stand-Off on the Sorcerer so he’s unaffected by Surgery, and activate Secret Village. Your opponent cannot play Spells as long as you control a Spellcaster and they don’t. Unaffected by DNA thanks to our new Spell, Sorcerer remains a Spellcaster, while thanks to DNA, our opponent cannot possibly control one. This shuts off their Spells until they draw Dust Tornado or Royal Decree, and even then, your opponent will need to control a Spellcaster-Type monster.

This Trap Card is very similar to Stand-Off with some significant differences. The first and most obvious is that your selected monster must be Tribute Summoned. Not too hard to do in a deck catered to it, but not exactly that viable in say, Fire Fist decks. The second is that you don’t need to rely on your opponent controlling a monster. Another key difference is that this card is Chainable, meaning that you can wait until your opponent tries to eliminate your Tribute Summoned monster with a card effect, at which point you flip this card. But perhaps the most crucial difference, and the weakness that balances this card is that in order for this card to be activated, you must have no cards in your Extra Deck. This does not mean you can’t run any Xyz or Synchros in your Deck, but you must have Summoned or lost all of them before activating this card. You will need a Deck specifically catered to this card’s effect. 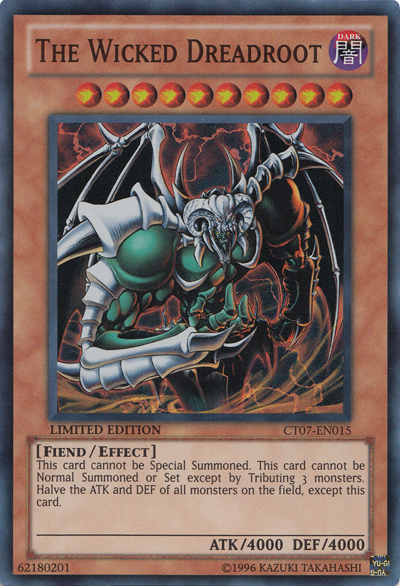 But that doesn’t mean that we can’t do some pretty crazy stuff with these cards when we do. Decks like Final Countdown or burn decks centered around Chain Strike are perpetually hated by players, and there is a pretty strong chance that with a monster affected by ‘uselessness’ is walling your opponent; you’ve got time to Draw into either an explosive combo, or Exodia the Forbidden One. The Tribute Summoned monster can still be destroyed by battle, and with Decks like Noble Knights getting as high as 3700 ATK easily, you’re going to need 4000 ATK points. That’s where The Wicked Dreadroot comes in. This is the highest ATK monster in the game that can be Tribute Summoned (excluding Obelisk, since it can’t be targeted by this card). It’s also the only one with more than 3700 ATK (though most often you only need to be stronger than 3200 due to Star Eater). If you manage to put up that wall, there is little to nothing in this card game your opponent can do to stop that juggernaut.

And that’s about it! We’ll be doing more card reviews in the future, so tell us which you’d like to see? Do you think you’ll use either of these cards? What other interesting new LVAL commons are you a fan of? Let us know in the comments below!