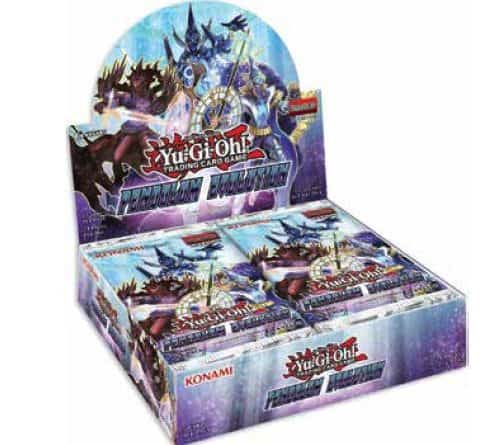 In tradition of current product announcements, names are still avoided like all heck.

But this comes as a surprise, because a different distributor’s prior announcement for a different product seemed to claim that it would include the expected contents of this set. We will investigate the matter.

Magicians with the might of dragons! Sorcerers that defy the laws of nature! Witness the magnificent and mystifying results of Pendulum Summoning’s final evolution! Following on from Maximum Crisis, Pendulum Evolution features powerful new Pendulum Monsters that can either stand on their own or in the service of that dreaded dragon, the Dominator of Dimensions itself, Supreme King Z-ARC!

• All-foil set, each pack includes a mix of Ultra Rare and Super Rare cards.
• Compatible with the Pendulum Monsters you already own, but specially crafted to take advantage of Maximum Crisis.
• Includes a pair of super-powered Sorcerers that are easy to Summon and give a faster, easier way to bring out Supreme King Z-ARC (from Maximum Crisis).
• New “Magician” monsters that excel at disappearing acts, providing useful effects when destroyed before moving to your Extra Deck to be Pendulum Summoned back for the grand finale!
• Features several new cards plus dozens of the most popular cards from the Pendulum Monster era of the Yu-Gi-Oh! ARC-V animated TV series.